"I just seen commotion and it was just crazy out here," Kareem Moore, a truck driver, told WJZ. "It was like a slew of cops just coming around. It was unbelievable."

Just as the workday started Tuesday, Frederick Police sent out a warning to the public that there was an active shooter.

Bryan Barrow was working across the road from the business park in the 8400 block of Progress Drive where an active duty military member shot two sailors.

"It's a little nerve-wracking," Barrow said. 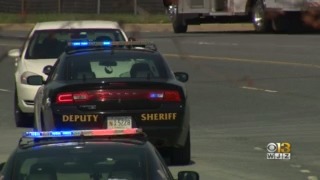 His sister was the one who called from another state and told him what was happening.

"I was in the building when she said it," Barrow said. "I come outside, and of course helicopters, cop cars everywhere."

The police activity shut down roads and people in local neighborhoods were put on high alert.

According to police, the shooter, 38-year-old Fantahun Girma Woldesenbet, then drove to Fort Detrick about 10 minutes away from the first scene. He was fatally shot by personnel on the base.

Frederick Community College is on the same street as the military base. They told students to, "Please follow the lockdown alert This is not a drill."

People who live in that area told WJZ they knew something was off when they heard alarms coming from Fort Detrick.

"Next thing I know, it was going off, kept going off, and I kept hearing police," Mark Nelson, who lives near Fort Detrick, said. "I did a social media search and saw that there was an active shooter incident going on."

No threat remains to the community. Frederick Police Chief Jason Lando said these shootings are happening "too frequently."

"It's happening too frequently. Every time we turn on the TV we're seeing something like this happen, and now it's happening in our backyard," Chief Lando said. "No one wants to see this type of thing."