HARRISBURG, Pa. (AP) -- Republican state senators asked Democratic Gov. Tom Wolf on Friday to withdraw his nominee to head the Pennsylvania State Police who was caught on video removing roadside signs critical of him, but the governor said he still supports him.

Wolf declined in a morning phone call from Senate Majority Leader Jake Corman to withdraw the nomination of Col. Marcus Brown. In a subsequent letter to Wolf released by Corman's office, the Senate's four ranking Republican senators made their wishes known.

In it, they cited the misdemeanor theft investigation by local police into Brown's removal of the signs near his suburban Harrisburg neighborhood and four other issues. 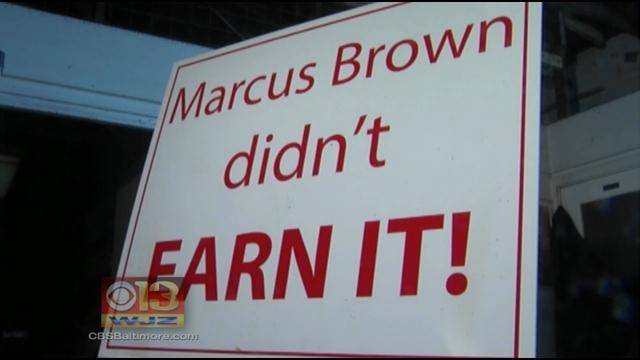 Those issues included his statements following turmoil in Ferguson, Missouri, about the role of police in escalating civil disobedience; his Baltimore police department pension arrangement, which drew scrutiny in 2007; and, while he was Maryland's state police superintendent, the 2014 shutdown of a busy highway by armed officers walking car to car with guns drawn during a manhunt.

Senate Majority Whip John Gordner said Friday that Brown had acknowledged to him in a meeting that police searches of cars during the manhunt on Interstate 270 in suburban Washington, D.C., were potentially illegal.

As a whole, the senators wrote, "we cannot reconcile such actions when they are committed by a candidate for Pennsylvania's top law enforcement post."

The message on the signs -- "Marcus Brown didn't earn it!" and "Marcus Brown don't wear it!" -- target Brown's decision to wear the Pennsylvania State Police uniform, rather than plainclothes, while on the job. Some retired state troopers have publicly criticized Brown for wearing the uniform because he did not attend the State Police Academy or come up through ranks accustomed to a commissioner being promoted from within.

The Pennsylvania State Police is one of the nation's largest police forces, with about 6,000 troopers and civilian employees and a $1 billion annual budget.

The investigation into Brown by Hampden Township police became complicated Friday. A newspaper, Pennlive.com, revealed that the department's chief, Steven Junkin, a retired 25-year state police veteran, was among those posting scathing online comments in recent weeks about Brown.

Told of the postings, Cumberland County District Attorney David Freed said Friday that it would be best if his office took over the investigation. Wolf's office released a statement saying the "comments are concerning and we are monitoring the entire situation closely."

Brown, 50, became acting commissioner in Pennsylvania when Wolf took office in January after serving as Maryland's state police superintendent under former Gov. Martin O'Malley. In a statement issued late Thursday night, Brown apologized for removing the signs, saying that he had made an error in judgment after he felt his family's privacy had been invaded.

Asked about it after a public event Friday morning in Philadelphia, Wolf said Brown is qualified for the job and did the right thing by apologizing.

"He was acting as a father and he was upset with what he saw, and he's apologized," Wolf said.

Wolf also said he doesn't understand the criticism of Brown for wearing the uniform, and praised his credentials.

"I chose him because he was a beat cop in Baltimore and he has done everything a police officer should do," Wolf said Friday. He was "very impressed with his qualifications and I think he'll do great things for Pennsylvania."

Brown is acting commissioner and needs confirmation from the Republican-controlled Senate to hold the title of commissioner. Even if the Senate rejects his nomination, he could continue to run the agency as its acting commissioner, Senate lawyers said.
------
Carlin reported from Philadelphia.

(Copyright 2015 by The Associated Press. All Rights Reserved.)