BALTIMORE (WJZ)--He's been on the job in Maryland for 66 years and he's the state's longest serving employee.

Ron Matz introduces us to a man who's seen it all because he's had his eye on history.

Tim Hyman's graflex was his first camera. Over six decades he's taken thousands of pictures, he's been the staff photographer for the State Highway Administration (SHA) since 1949.

"I captured the picture of President Kennedy when he came to dedicate I-95 in Maryland," said Tim Hyman, SHA photographer. "The ribbon cutting was November 14, 1963, Governor Tawes is in the picture with him. It makes me feel good that I was physically there. A lot of people were not allowed to get close to him....we were in close proximity to him."

The picture of President Kennedy was taken just eight days before the assassination, in 1953 he was on and flew over the original bay bridge. 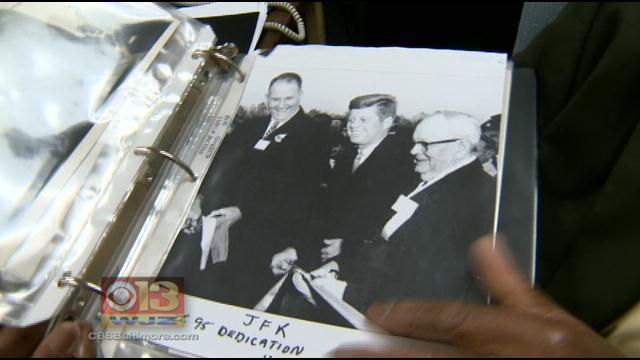 But, his favorite picture? The one he took of his mother.

"My favorite picture and my most important is the picture I took of my mother....when I look at that picture I see a replay of my life. That was important and I treasure that because she was there with the peanut butter and jelly," Hyman said.

Tim's office could be a museum. From film stock, to negatives--he's keeping his life  in focus.

"I take pride in what I do. I don't do it just to do it. If it doesn't fit my approval I don't give it to anybody else. My work like my word speaks for me and the only thing of real value that I have is my word,"  he said.

It's been a remarkable career for Tim Hyman here at State Highways but it will likely end soon. He says he plans to retire in September.

Hyman says, "My motto for many years has been to be ahead of time, but no later than on time. I live by that."

Tim Hyman was born and raised in Baltimore and now lives in Randallstown. In his 66 years working for the state he has never taken a sick day.