Eighty-two games have come and gone. The 16 "best" teams in the NBA are positioned for a run at the Larry O'Brien Championship Trophy. Who will hoist it come June? We lay out the reasons why each team will and won't win the title as well as their x-factor.

The Western Conference has dominated NBA talk all season. With Golden State's dash into the record books and San Antonio's continuing marathon of consistency, many other teams have been overlooked. The West is full of talented teams, although not as stacked as in years past. Here's the breakdown.

73-9. Do we really need to say any more than that? Analysis of the Warriors has been thorough all season long, and the reasons to believe they'll win are self-evident. They've steamrolled the rest of the league, losing just nine games all season long. Do you really think they'll lose four in a seven-game stretch?

The Warriors burned a lot of gas chasing the regular-season record. Do they have enough left in the tank to keep it going through the postseason, when the level of intensity gets dialed up? They'll probably run into the Spurs in the conference finals. Pop and his wily coaching ways could Jedi mind-trick them into losing four games out of seven. Those are the storylines that could play out, keeping the Warriors from winning it all for the second consecutive year.

The Warriors have been lucky to keep their core guys relatively healthy (minus the Bogut and Iguodala injuries). If one of the key guys goes down, this team could be in trouble. But, in reality, that can be said for every team.

The Spurs hummed along to one of their best records in typical San Antonio fashion: talking little but playing big. They played the Warriors tough each time they had their full complement of players available. Their ability to switch everything and match the Warriors small-ball lineups makes them just the kind of team who can knock off the defending champs. Plus, we've already seen Kawhi Leonard elevate his defense in the playoffs, when he won the Finals MVP award two years ago. If he can find that gear again and contain Curry, the Spurs have the firepower to come out on top.

The Spurs won't have home-court advantage if they face the Warriors in the conference finals. And that matters. Oracle is one of the most difficult places to play in the NBA; the Warriors lost two home games all season. For the Spurs, likely having to go through Oracle  is not ideal. In addition, Golden State showed in the final two regular season meetings that they can ratchet up their defense enough to get the Spurs offense out of rhythm.

Aldridge has been very good in his first year with the Spurs. His ability to step out to 18-20 feet and consistently hit jumpers opens up a ton of space for the rest of the offense. If he can get hot from that mid-range area, he can combine with Leonard to carry this team to another title.

The Thunder have felt like the forgotten team throughout much of the season. Russell Westbrook has been otherworldly with 18 triple-doubles, a total that only Magic Johnson has reached in the last 40 years. Kevin Durant has returned to his high level of production from before the foot issues that plagued him the past couple of seasons. They have the talent and offensive firepower to get hot and run through the rest of the West.

Defense and late-game execution (or lack thereof) have hindered the Thunder all season. They're just 12th in the league in defensive efficiency, allowing 103 points per 100 possessions. Add to that their poor handling of late-game situations and a deep playoff run seems much less likely. They rely entirely too much on isolation plays late in close games, pushing down their assist rate in "clutch" situations to just 40.5%, sixth worst in the league. Having Westbrook and Durant is huge, but they haven't moved the ball well when it matters.

We touched on the issue above, but this is truly key to the postseason. Playoff games generally aren't blowouts, so the Thunder will find themselves in tight games a lot. How they execute in those spots will determine how far they go.

The Clips continue to be that team on the verge of putting it all together and making a playoff run. Perhaps this will be the year. Despite playing without Blake Griffin for the middle months of the season, the Clippers locked up the fourth seed and home-court advantage in the first round. That is largely thanks to the wizardry of Chris Paul who put up his yearly double-double, averaging 19.5 points and 10 assists per game. As a team, they're sixth in offensive efficiency (106.5) and fifth in defensive efficiency (100.9). That elite level of play says a lot, considering only the Warriors and Spurs managed similar rankings.

Despite that efficiency on both ends, the Clippers are allowing opponents to shoot nearly 57% around the rim this season. They've defended the perimeter well, which is important against the likes of Golden State and San Antonio, but that paint defense is worrying. Additionally, their depth is a concern, as it has been for several years now. Outside of the starting five of Paul, J.J. Redick, Jeff Green, Blake Griffin and DeAndre Jordan, the only reliable options off the bench are Jamal Crawford, Paul Pierce, Luc Richard Mbah a Moute and Wes Johnson. The problem: those guys are all wings. Pierce isn't as effective as he used to be, Mbah a Moute isn't an offensive threat and Johnson is inconsistent. Backup point guard Austin Rivers, like Johnson, is an up-and-down player.

What they get out of the bench will determine how far they can go. Paul, Griffin and Jordan are great, but they can't play 48 minutes each night. The bench needs to step up to help this team go on a run. 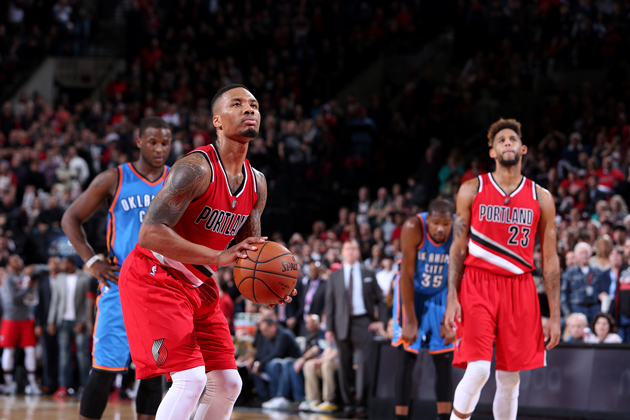 The Trail Blazers may have the NBA's best backcourt outside of Oakland. Seriously. Damian Lillard and C.J. McCollum are the Splash Brothers-lite. They led Portland to the seventh best offensive efficiency rating (106.1 points per 100 possessions) in the NBA and combined for a little over 45 points and 10 assists per game. When Lillard and McCollum are hot, Portland can beat any team, including Golden State, as they showed earlier this season. Beware the Trail Blazers, this team can fill it up.

The problems come on defense. The Trail Blazers were 20th in the league in defensive efficiency, allowing 105.6 points per 100 possessions. In particular, they've allowed opponents to shoot 38.4% from 20-24 feet out and 37.9% from 25-29 feet this season. Allowing opponents to shoot nearly 40% from three-point range creates issues in today's NBA.

We know what Lillard and McCollum can do. But where does the rest of the scoring come from? The only other players averaging double figures this season are Allen Crabbe and Al-Farouq Aminu at 10.3 and 10.2 points respectively. That's a significant drop off from their star backcourt. Getting consistent production from their second-tier scorers and players like Gerald Henderson, Mason Plumlee and Ed Davis will be crucial.

Long live Dirk Nowitzki. Nowitzki led the Mavs in scoring at 18.5 points per game, and the addition of veterans Wes Matthews and Deron Williams has worked out splendidly. Matthews has looked solid in returning from that Achilles injury and Williams seems to have rediscovered some of his old game now that he's no longer a Net. Dallas is loaded with veterans and led by an experienced coach in Rick Carlisle. These types of teams are always dangerous.

For as nice as it is to see Dirk in the playoffs once again, Dallas doesn't have enough to compete with the top teams in the West. Sure, the Mavs beat the Warriors this season, but that game was played with Steph Curry sitting on the bench nursing an injury. The Mavs are fun, and could surprise the Thunder in the first round, but they seem unlikely to make a deep run.

Short of finding a magic potion that returns Dirk, Deron and Wes to their younger selves, the Mavs are unlikely to make a run.

The Grizzlies game style has been known as Grit-N-Grind for years now. That style of play -- slowing the tempo, playing suffocating defense -- is synonymous with Memphis basketball. And it's worked for them in the past. They'll bring that same game to the table this year.

Memphis is possibly the most injured team in the NBA. Marc Gasol, Jordan Adams and Brandan Wright are all out for the season. Point guard Mike Conley has missed significant time, and even though he might be back for the playoffs, how effective can he be? Even Tony Allen has recently been hampered by a hamstring injury. There are just too many significant injuries for them to overcome.

With all of those guys out, Lance Stephenson will surely try and take on as much of the scoring load as possible. While probably not advisable, it will sure be fun to watch. 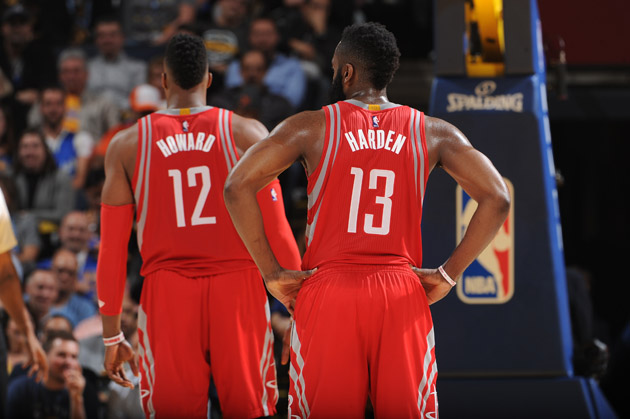 As disappointing as this season has been in Houston, the Rockets are still dangerous with James Harden, Dwight Howard, Trevor Ariza and the revived Michael Beasley. They won their last three regular-season games to secure a playoff spot, so the team has been in playoff mode now for at least a week. They're eighth in the NBA in offensive efficiency at 105.1 points per 100 possessions. That offense, with the ever-present threat of huge games from Harden, could lift them to a run.

In the first round, the Rockets play the Warriors, who rolled them in last year's conference finals and averaged 116 points against them this season. They are 21st in defensive efficiency. They've been a dysfunctional mess all season, and Dwight Howard and James Harden seem to be done with each other. Need any more reasons?

It's the playoffs. Maybe the Rockets get hot at the right time, Harden and Howard find harmony, and the vision of Daryl Morey all come together in a magical playoff run. And maybe I'll win the next PowerBall drawing and become Santa Claus.

This is what we've been looking forward to all season, right? The coronation of Golden State as the NBA's best team (possibly ever) can't happen unless the Warriors beat Popovich and the wily Spurs. We were robbed of this matchup last year, but we'll get it this season, and it will be glorious. In the end, if everyone stays healthy, the Warriors will pull it out and go on to meet the East's winner (most likely the Cavs) for the NBA title. However, it wouldn't stun me at all if the Spurs find a way to win this one.

Ryan Mayer is an Associate Producer for CBS Local Sports. Ryan lives in NY but comes from Philly and life as a Philly sports fan has made him cynical. Anywhere sports are being discussed, that's where you'll find him.