The Glass Fire quickly grew to more than 2,500 acres, burning through vineyards, destroying structures and driving at least 2,000 local residents from their homes.

On Sunday evening, a small army of firefighters was waging a fierce battle with the fire, trying to keep it from jumping the Silverado Trail, but it appeared the flames had crossed the major roadway in several places. A wall of flames was threatening the Adventist Health St. Helena hospital (which had been evacuated earlier Sunday) and homes in Deer Park.

By shortly before 10 p.m., the fire had jumped both the Silverado Trail and the Napa River.

The flames ripped through the The Chateau Boswell Winery located on the Silverado Trail. 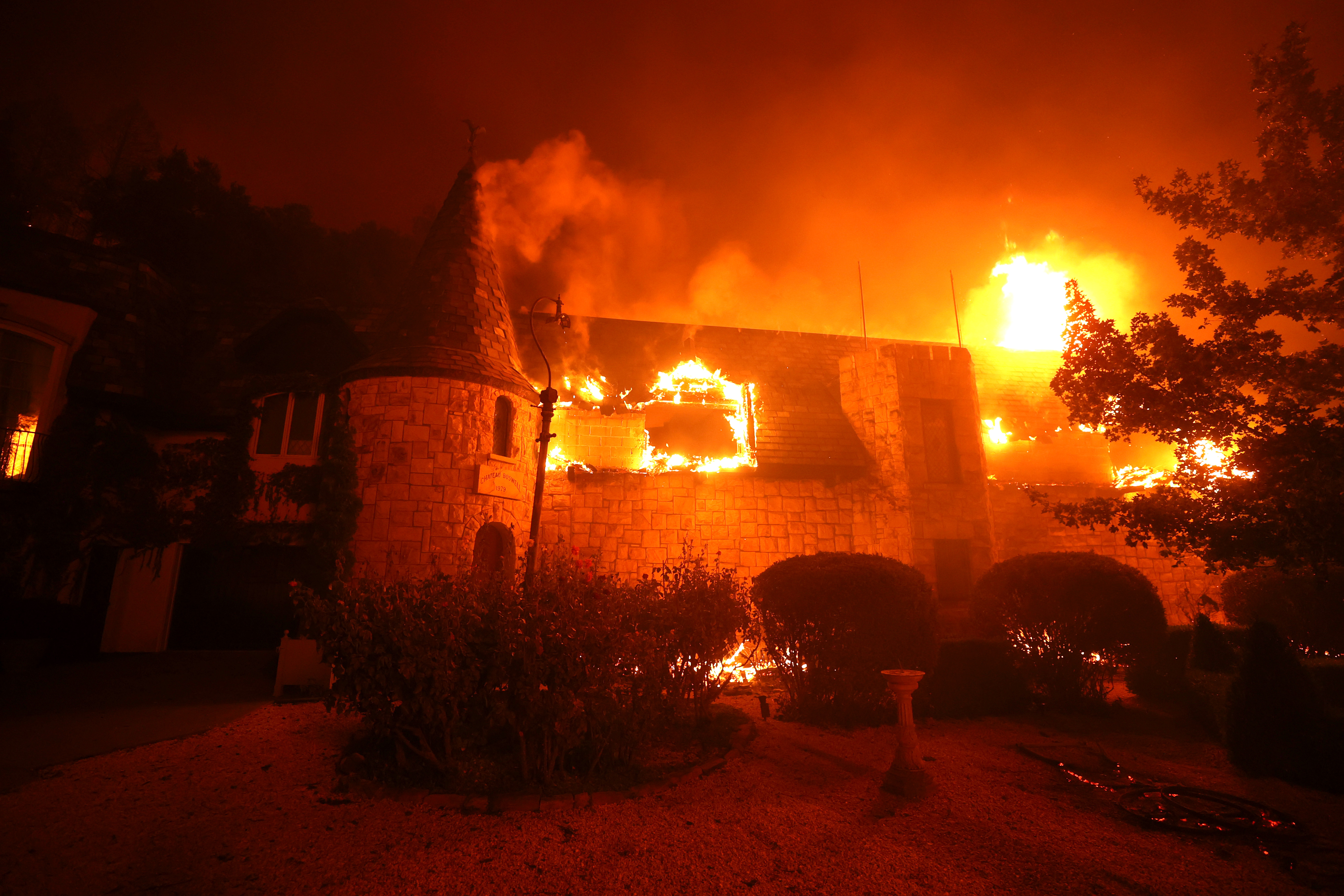 The fire also jumped Highway 29 near the Culinary Institute of America, triggering mandatory evacuation orders for residents living in the area west of Highway 29 from Deer Park Road to Elmhurst and all of Spring Mountain Road.

Shortly after 11 p.m. an earlier evacuation warning for Howell Mountain Road to the dead end of Conn Valley and all of Rossi Road and Greenfield Road was upgraded to a mandatory evacuation order.

Two other wildfires erupted in the area Sunday night. The Boysen Fire was burning off Spring Mountain Road just west of St Helena while the Shady Fire was burning toward the west near Santa Rosa.

A growing evacuation order area extends from St. Helena Road -- where the two new fires sparked Sunday evening -- all the way to Highway 12.

Evacuation warnings were issued for the areas of Summerfield, Spring Lake, Northeast 2 and Northeast/Middle Rincon shortly before midnight.

There were reports that city buses were being used to evacuate seniors from Oakmont Village, a retirement community near Santa Rosa as well as other assisted-living centers in the area.

More detailed information on the evacuation orders can be found on the Santa Rosa Police nixel alert page.

There were reports that the Boysen Fire and the Shady Fire were close to merging after 11 p.m.

The Sonoma County Sheriff tweeted just after midnight that residents evacuating from the Boysen and Shady Fires should head east on Highway 12 towards Sonoma as traffic traveling west towards Santa Rosa was gridlocked.

On Sunday afternoon, air tankers -- including DC-10s and a 747 -- waged a fierce battle with the flames as the fire took a run in Bell Canyon and toward the Bell Hill Reservoir.

Due to the topography - steep terrain with minimal access - there was no way to fight the fire from the ground. It has to be from air.

Officials have issued mandatory evacuation orders for the following areas:

After waking up to fire alerts and messages from worried friends, Amy Bordeau of Calistoga said she grabbed the same bag she recently used when evacuating from another nearby wildfire.

"It's a bit traumatizing," she said. "I feel like I'm constantly fight or flight."

Deputy Matt Macomber, one of several deputies currently evacuating parts of Napa County, posted a frightening video on social media of driving down a fire-surrounded lane in the hills.

Napa County officials have set up evacuation center at Crosswalk Community Church, 2590 First Street in Napa. The sheriff's department asked the evacuated residents to clear out of the area.

"When evacuating, please leave the area," deputies posted. "Do not stop/park in turnouts to view the fire. First responders often need access to the turnouts to park emergency vehicles."

Over just a few hours since the blaze was first reported at 3:50 a.m., the fire had grown to more than 1,200 acres with zero containment. The fire was being fueled by tinder-dry vegetation on the rural hillsides after weeks of high temperatures and low humidity.

The area, located between St. Helena and Calistoga off North Silverado Rd., is home to dozens of wineries. Among those threatened by flames was Reverie Winery, Viader Winery and Davis Estates winery.

"We found out this morning at 4:45 that the fire started at the 200 block of Crystal Springs and, considering our address is 264 it was a pretty scary moment, for sure," Reverie owner Grant Long told KPIX 5.

Long made the spooky drive to his winery Sunday afternoon, wondering if it would still be there. The neighbor's house across the street is gone, but thanks to the vineyards and a lot of defensible space, the winery lives on.

"It was very surreal for a moment because it's almost like it wasn't here and you have to see it to believe it and being able to pull up and see it," he said. "It's a blessing."

Cal Fire said its crews were fighting a "vegetation fire with dangerous rate of spread." Meanwhile, PG&E said it "turned off power for about 3,000 customers between approximately 4:30 a.m. and 6:15 a.m. Sunday morning in Napa County as a precaution.

Air support from tankers and helicopters began making water and fire retardant drops after 8 a.m. Fire crews that have been battling the nearby LNU Lightning Complex fire for more than a month were being hurried to the area.

Angwin Fire officials told their local residents to get prepared if they need to evacuate -- "Angwin is under advisory evacuation. Please consider safely departing off the mountain."

The fire was not related to the LNU Lightning Complex fire which has burned 363,200 acres in Napa, Sonoma and Solano counties and was 98 percent contained as of Saturday evening.

Satellite images released by the National Weather Service showed the fire was growing in intensity.

The area was under a red flag fire warning for weather conditions that include gusty winds, low humidity and warm early morning temperatures.

"Currently, wind gusts of between 30 and 40 mph are being observed above 1500 feet in the North and East Bay, and Mount Saint Helena (elev. 4300 feet) has been reporting gusts as high as 65 mph early this morning," the National Weather Service said early Sunday.