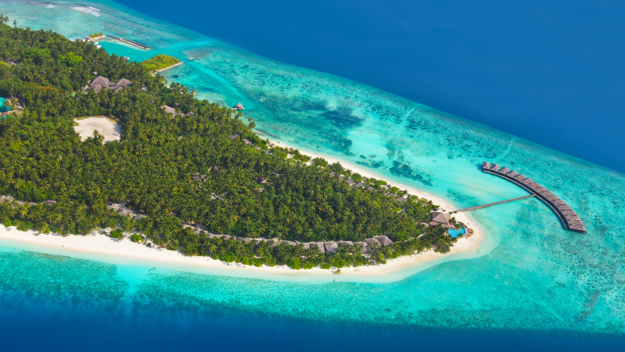 Although it appears like an insignificant speck on a global map, The Maldives is a truly one of the world's most unique destinations. Located just north of the equator in the Indian Ocean, the Republic of Maldives is a fascinating island nation comprised of an estimated 1,200 coral islands and 26 atolls extending over 35,000 square miles. This travel guide introduces the best that the Maldives has to offer, including dining and lodging recommendations and things to do in this enchanting Asian destination.

Entry Requirements Into The Maldives

All U.S. visitors must possess a valid U.S. passport with at least one blank page at the time of entry. Tourist visas for up to 30 days may be obtained at the airport. For visitors traveling from an "infected area," a vaccination for yellow fever is required prior to arrival. Additional information can be found through the U.S. Passports and International Travel website.

The official Maldivian language spoken in the Maldives is Dhivehi, an Indo-European language related to the Sri Lankan language Sinhalese. Because the Maldives were once ruled by the British Empire, English is widely spoken around the islands. Islam is the official religion and, according to the Constitution of the Maldives, all citizens are required to be Muslim.

The official currency of the Maldives is the Maldivian rufiyaa. Currently, the U.S. Dollar is the equivalent of 15.34 rufiyaas. Conversely, a single rufiyaa is $.07 U.S.

The Maldives is home to four international airports, with the primary getaway of Ibrahim Nasir International Airport located on Hulhulé Island in the North Malé Atoll. Because no American airline carrier has direct service to the Maldives, U.S. travelers must make a connection from a major Asian city, such as Hong Kong, Singapore, Seoul or Bangkok. Among the major international airlines with service into the Maldives are Bangkok Airways, Cathay Pacific, Emirates, Korean Air, Singapore Airlines and Sri Lankan, providing the largest number of flights.

Once at the airport, visitors can make connections to any of the major tourist destinations, such as Addu City, Fuvahmulah and Malé, the capital and largest city. The most common form of transportation from the airport is with a dhoni (speedboat), with trips generally departing every 30 minutes to and from Malé  City. To reach further destinations, visitors can transfer to either a seaplane or board a domestic plane.

With close to 200 properties, there are numerous choices for overnight accommodations in the Maldives, from affordable hostels under $50 per night to five-star luxury resorts. While many of the finest resort hotels are priced at over $1,000 per night, there's also a sizable collection of upscale resorts that still fall within the moderately priced range. However, for those who can afford it, there are an abundance of world-class spots that occupy entire islands within the Maldives, including Gili Lankanfushi, featuring seven astounding over-water luxury villas and named this year's "Best Hotel in the World" by Trip Advisor, along with Cocoa Island by COMO and Constance Moofushi, which made the world's top 15.

Related:  How To Stay Healthy When Traveling

Top Things To Do

With a population of over 115,000 residents extended over just 2.2 square miles, the capital city of Malé is one of the world's most densely populated cities. While the island resorts are the primary destination of choice and the largest city an afterthought, Malé has many noteworthy attractions to enjoy, at least for a day. Of particular interest is Malé Friday Mosque, also known as Hukuru Miskiiy, the oldest mosque in the Maldives. Dating back to 1656, this impressive religious complex is one of a handful of ancient Maldivian mosques made from coral stone and timber and has been in continuous use since its 17th-century opening. Malé Friday Mosque and its associated mosques are currently on the tentative list for submission as a UNESCO World Heritage Site from the Maldives. Other attractions of particular interest in the capital city are the National Museum, Islamic Center and the fascinating Malé Fish Market. Visitors can get across the city on foot, by city bus or by taxi.

The largest and busiest fish market on the Maldives really needs a complete section of its own. Frequently lauded as the top attraction of all the islands. A journey here to the northern end of Malé Island gives visitors an inside look at the country's second most important industry. Countless numbers of fish are brought in at the crack of dawn daily, then presented to scores of prospective buyers, which include chefs from all of the high-end resorts. Several species of fish are put on display for purchase, but the most sought-after varieties are yellowfin tuna, sailfish, reef fish such as dorado and wahoo and the most important catch of all, skipjack tuna. Fish is sold throughout the day until it's all sold or consumed, and afterward, other items are available for purchase at the fish market, including fruit and vegetables.

The Maldives is unquestionably one of the world's best destinations for scuba diving and snorkeling. The undersea world circling the islands reveals massive layers of coral reefs and a vast number of sea creatures, such as eagle rays, manta rays, vividly colored reef fish and curious sea turtles. Visibility underwater is phenomenal throughout the year, but the best time for diving is typically from December to March. One of the most acclaimed diving excursions is a journey to the Maldive Victory, a 360-foot cargo ship that sank in 1981 near the capital city of Malé. Many of the resort hotels specialize in diving trips, including Gili Lankanfushi, Taj Exotica Resort and Spa and Kurumba Maldives. Other world-renowned diving spots include Alimantha Island, Ari Atoll and Vaaavu Atoll, located in the Southern Atolls. The Official Tourism Board of the Maldives is an excellent resource for the finest snorkeling and diving businesses, like the top-rated Blue Tribe Moofushi and other resorts that specialize in diving trips.

Every visitor to the Maldives will have to do some island hopping once they leave the airport. But by using public ferries, travelers can visit other magnificent spots, including extraordinary island resorts for a day trip. The Maldives Transport and Contracting Company offers both ferry boats and high speed boats for group visits. In addition to the public option, a number of resorts and private tour operators like GA Adventures and World Expeditions also offer island-hopping trips.

Relaxing On The Beaches

The Maldives has some of the most amazing resorts on the planet, but contributing to the allure of these island paradises is the sheer number of breathtaking beaches with its unsurpassed vistas. In fact, visitors won't go wrong by simply visiting any of the approximately 1,200 islands, throwing down a beach blanket and enjoying the warm crystal turquoise blue waters, with year-round water temperatures hovering just above pool temperatures at around 82 degrees. Some of the better known beaches favored by residents and vacationers include Veligandu, Rangali Island, Kunfunadhoo Ilsand, Sun Island and the stunningly beautiful beaches around the UNESCO Bioreserve Baa Atoll.