PALM SPRINGS (CBS/AP) -- A tour bus slammed into the back of a semi-truck on a Southern California highway early Sunday, killing 13 people and injuring at least 31 others, some critically, authorities said.

The passenger bus was going much faster than the truck, but it's not yet clear if it was speeding on Interstate 10 just north of the desert resort town of Palm Springs, California Highway Patrol Border Division Chief Jim Abele told reporters. 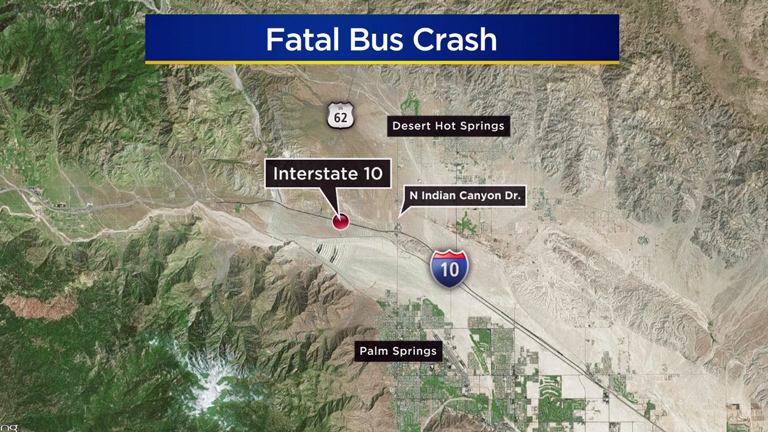 "The speed of bus was so significant that the trailer itself entered about 15 feet into the bus," he said at a news conference. "You can see it was a substantial impact."

Abele said it was not known if alcohol, drugs or fatigue played a role in the crash about 100 miles east of Los Angeles. The USA Holiday tour bus was returning to Los Angeles after a visit to the Red Earth Casino in Thermal, about 25 miles southeast of Palm Springs. The bus driver was killed, and the truck driver received minor injuries.

Passengers told officials that most people were asleep when the crash occurred at 5:17 a.m. Abele said he didn't believe the 1996 bus had seat belts and likely didn't have a black box outfitted in newer vehicles.

The bus was inspected in 2014, 2015 and this year and didn't have any mechanical issues, Abele said. Federal Motor Carrier Safety Administration records show it had no crashes in the two years before Oct. 22 and had a satisfactory safety rating.

The front of the bus had crumpled into the semi-truck's trailer and debris was scattered across the key route through Southern California. Firefighters used ladders to climb into the bus' windows to remove bodies and tow trucks lifted the trailer to make it easier to reach the bus, whose front end was demolished.

CHP Officer Stephanie Hamilton earlier told the Desert Sun newspaper in Palm Springs that the driver was one of the owners of USA Holiday, based near Los Angeles. The company has one vehicle and one driver, according to the Federal Motor Carrier Safety Administration.

A phone message left for the company was not immediately returned. A Facebook message from USA Holiday said it did not have much information about the crash.

The company says on social media that is has more than 25 years of experience in traveling to casinos in Southern California. It posts about trips leaving the Los Angeles area to casinos around the Coachella Valley and Las Vegas.

The CHP says all westbound lanes of the highway were closed and traffic was being diverted.

The National Transportation Safety Board is sending a team to California to investigate the crash, board spokesman Eric Weiss said.

It comes two years after a FedEx truck veered across an interstate median north of Sacramento and slammed into a bus full of high school students, killing 10 people. In August, a bus in central California hit a highway sign post that tore through the vehicle and left four people dead.