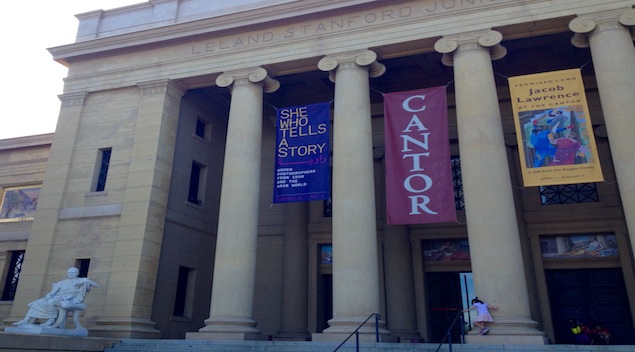 The definition of abstract art has no one clear consensus, although expert commentary has weighed in for centuries, from Plato to Pablo Picasso. Some say it began with Stone Age Paleolithic cave art drawings, others identify it with the breakaway contemporary art movement of the 20th century. In these places, you'll see abstract art. Importantly, you'll also feel it, for this distinction is at the core of any definition.

Widely known for its extensive collection of Auguste Rodin bronzes, one of the largest outside Paris, this museum covers 5,000 years of art history. While the San Francisco Museum of Modern Art undergoes expansion in preparation for a 2016 re-opening, the Cantor hosts "Pop Art from the Anderson Collection at SFMOMA" through Oct. 26. In the Freidenrich Family Gallery, see 10 works including Andy Warhol's 1967 self portrait in acrylic and silk screen enamel on canvas. Also included are works by such 20th century notable artists as Jim Dine, Jasper Johns, Roy Lichtenstein, Claes Oldenburg, Robert Rauschenberg and James Rosenquist. Decent tours are available (closed Tuesday) and admission is always free.

Adjacent to the Cantor Arts Center, the Anderson Collection is a major institution in a newly constructed building. Referred to as "one of the world's most outstanding private assemblies of modern and contemporary American art," admission is free. The collection of 121 paintings and sculptures covers works from 1941 to 2010, including well-known abstract artists such as Mark Rothko, Jackson Pollock, Ellsworth Kelly and Richard Diebenkorn. Docent-led tours take place daily (except when closed on Tuesdays). Architectural Digest has praised the building itself, opened in 2014, for its "brilliant balance between utility and beauty."

The exclamation point is part of the ICA! signature. Interpret it as surprise and delight, to coin a phrase. Through Sept. 20, visitors can enter the exhibit "Naomie Kremer: Art of Entanglement," her second show in a decade at this museum. The exhibit encompasses inter-disciplinary mediums: painting, photography, digital imaging, high-resolution projection and video footage to produce "abstract-lyrical" connections for viewers. Kremer's work is held in museum collections including the Whitney Museum of American Art; Brooklyn Museum; Hammer Museum, Los Angeles; SFMOMA and Fine Arts Museums of San Francisco.

Within the permanent collection dedicated to "art of our time" at San Jose Museum of Art, some 35 items are classified as abstract art by the museum curators. Oils on canvas, watercolors, mixed media, woodblock prints, pastels and more expressions are included. Among the works labeled "A Culture of Spontaneity: San Francisco Abstract Expressionism from the Permanent Collection, 2008-2009," is James Kelly's "Last Days of Dylan Thomas." The 1953 oil painting commemorates the poet's death during the height of the Beat Generation scene. General admission is $8, senior, students, youth at $5, free for children under age 6 and under. Closed on Mondays.

Conducted every first Sunday of the month at 2 p.m., a free guided walking tour of outdoor art takes place on Stanford University's campus. More than 20 pieces will be covered as highlights of the 85-item collection, featuring important figurative and abstract works in a variety of media by artists of the late 19th century to the present. Meet a docent, rain or shine, at The Oval at the Main Quad Entrance. The tour includes pieces by Auguste Rodin, Alexander Calder, Mark di Suvero, Andy Goldsworthy, Joan Miró, Antonio Fruili and more.