OAKLAND (CBS SF) -- R&B star Rihanna left little doubt who she was cheering for as she sat courtside during Game One of the NBA Finals.

She dabbed after a Lebron James dunk and taunted nearby Warriors fans as the Cavs kept the game close during the first half. She wanted everyone to know she was a Cleveland Cavs and James fan. 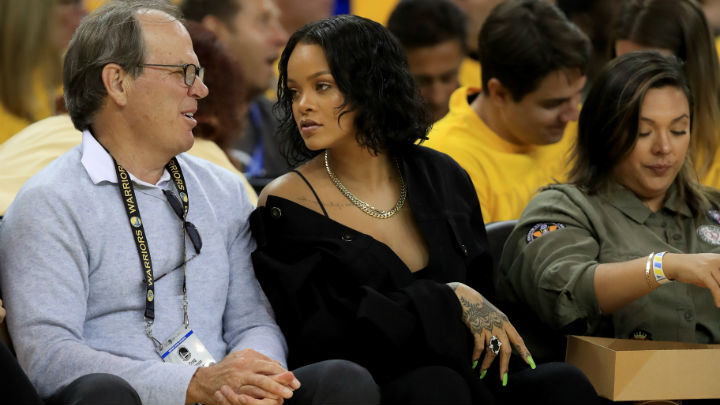 Her antics were hard to ignore and even caught the attention of on-air analyst Jeff Van Gundy.

They may also have drawn the eye of Warriors star Kevin Durant. After all, she loudly yelled out 'brick' when the Golden State star missed a free throw.

Late in the second half, Durant -- who was locked in a duel with James -- launched a three-pointer that put a final dagger into the Cavs in the 113-91 Warriors victory. He wheeled around and appeared to stare down Rihanna. Social media exploded.

When asked at the post-game press conference about 'the stare down' -- teammate Steph Curry stepped in with some advice.

"Don't get in that trap bro," Curry said.

For his part, Durant said; "I'm cool, have fun with that."

As for Rihanna, as she walked out of Oracle Arena she left little doubt she was still a loyal James fans telling security guards and others -- "It doesn't matter b...h, the King is still the King."