REDDING (CBS/AP) -- Both directions of Interstate 5 connecting California and Oregon were closed and evacuations were ordered Wednesday when a fast-moving wildfire swept through a wilderness area. 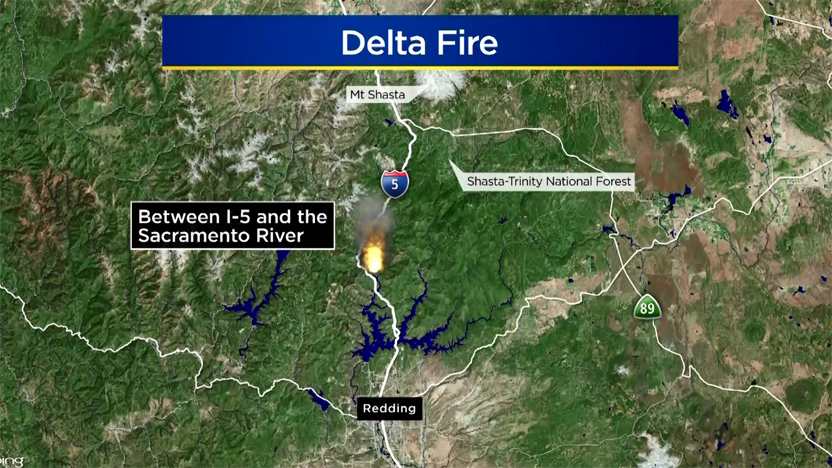 The blaze in Shasta County was reported during the afternoon and within hours had charred nearly 8 square miles of brush and timber in the Shasta-Trinity National Forest about 200 miles north of San Francisco.

The fire was human-caused, fire officials said. However, they didn't indicate whether it was arson or an accident.

The fire shut down miles of Interstate 5 and there was no immediate word on when it would reopen. The blaze also delayed Amtrak's Coast Starlight service between Sacramento and Oregon.

Footage posted by KRCR-TV of Redding showed roaring flames and plumes of dark smoke as some trucks and cars were left abandoned on the side of Interstate 5.

Several trucks were burned and would have to be removed before the road could reopen.

In a video, a passenger in a vehicle on the freeway screams: "Oh my God, I want to go!" as trees catch fire and flames race up a hillside next to the road.

The key interstate was closed from 10 miles north of Redding to an area just south of Mount Shasta. The Delta Fire was not immediately burning near large towns but was threatening a number of structures in an area of campgrounds, recreational residences and cabins, forest spokeswoman Kerry Greene said.

It comes just weeks after a devastating fire destroyed nearly 1,100 homes and killed eight people in the same area. That blaze, the Carr Fire, was declared contained just last week.

Meanwhile, a forest fire in California's eastern Sierra Nevada continued to grow and impacts on travel were increasing, officials said.

State Route 108 was closed from the Alpine-Mono county line to U.S. 395, which was already shut down in the mountainous region about 200 miles (320 kilometers) east of Sacramento, the California Department of Transportation said.

The U.S. 395 closure extended from the town of Bridgeport to just south of the community of Walker, Caltrans said.

© Copyright 2018 Associated Press. All Rights Reserved. This material may not be published, broadcast, rewritten or redistributed