(CBS News) -- A sprawling investigation unfolded Wednesday as authorities scrambled to respond to a series of suspicious packages. The Secret Service intercepted two packages that were addressed to former President Obama's home in Washington and Bill and Hillary Clinton's residence in Westchester County, New York.

Another package was addressed to former CIA Director John Brennan at the New York City offices of CNN, prompting CNN's bureau and the Time Warner Center to evacuate.

A package that was originally addressed to former Attorney General Eric Holder didn't arrive at the address it was intended for and was rerouted to the return address on the label -- the Florida office of former DNC chair Debbie Wasserman Schultz. 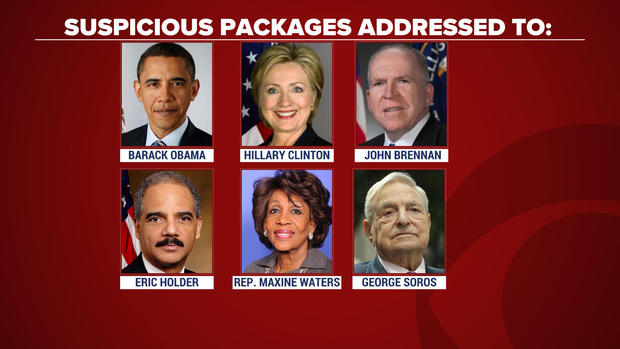 Multiple law enforcement sources say one of the bombs consisted of PVC tubing and used a digital clock connected to a small battery as a possible trigger device, CBS News' Jeff Pegues reports. Pyrotechnic powder was the explosive, and in order to keep it lightweight, glass was used as shrapnel.

Investigators think whoever put the device together was trying to keep the weight down so that they could put in a mailbox without having to appear at a post office for mailing.

The six packages were all similar in appearance. The large manila envelopes with six American flag "Forever" stamps will now be analyzed at the FBI laboratory in Quantico, Virginia. Investigators will deconstruct them, looking to trace the origin of the wiring and the other components to see where and when they may have been purchased and by whom.

Packages sent to be opened in Quantico

The packages are being sent to the FBI Laboratory in Quantico, Virginia, according to a press release by the FBI. A U.S. law enforcement official told CBS News' Andres Triay that all the bombs are going to the lab in Quantico because bomb technicians want to analyze the devices at the same lab.

Most of the packages have not been opened.

He also said he is deploying 100 additional National Guard soldiers "out of an abundance of caution."

"Public safety is our number one priority, and we are taking all necessary precautions to ensure the safety and security of New Yorkers," he said in a statement.

FBI: Packages had a return address of "Debbie Wasserman Shultz"

"The packages were mailed in manila envelopes with bubble wrap interior," the FBI said in a statement. "The packages were affixed with computer-printed address labels and six Forever stamps. All packages had a return address of 'DEBBIE WASSERMAN SHULTZ' [sic] in Florida."

It said the packages were "similar" in their appearance, "as depicted in the below photograph." The FBI said addresses on the envelope were removed for privacy reasons:

The building that houses Rep. Debbie Wasserman Schultz's office in Sunrise, Florida, was evacuated Wednesday after a suspicious package arrived in the mail.

The package was removed safely from the building and taken to an FBI lab where it will be examined, CBS Miami reported.

The package was originally addressed to Eric Holder, but was sent to the wrong address and returned to the return address, the office of Wasserman Schultz.

Trump on suspicious packages: "We have to unify"

President Trump said Wednesday afternoon that "acts or threats of political violence of any kind have no place in the United States of America." He said in these times "we have to unify."

"The full weight of our government is being deployed to conduct this investigation and bring those responsible for these despicable acts to justice," he said. "We will spare no resources or expense in this effort."

He also said, "We're extremely angry, upset, unhappy about what we witnessed this morning and we will get to the bottom of it."

"The safety of the American people is my highest and absolute priority."

Watch his remarks below:

NYPD: Cuomo did not receive a package bomb

The New York City Police Department said a suspicious package at New York Governor Andrew Cuomo's office has been cleared by NYPD personnel and is unrelated to other devices.

Cuomo said earlier Wednesday that his Manhattan office had received a suspicious device.

Later on Wednesday, Waters issued a statement saying, "I have been informed by U.S. Capitol Police that my Washington, DC office was the target of a suspicious package that has been referred to the FBI. I am appreciative of the law enforcement entities who intercepted the package and are investigating this matter. I unequivocally condemn any and all acts of violence and terror."

Two sources said the package addressed to Waters is similar to the others intercepted in New York and Washington, D.C.

Hillary Clinton said Wednesday at a Florida fundraiser: "We are fine thanks to the men and women of the Secret Service who intercepted the package addressed to us long before it made its way to our home."

"Everyday we are grateful for their service and commitment and obviously, never, never more than today," she said. "But it is a troubling time isn't it? And it's a time of deep divisions and we have to do everything we can to bring our country together."

John Miller, NYPD's chief of counterterrorism, said during a news conference Wednesday that the device sent to CNN's offices in New York appeared to be sent by the same individual who mailed devices to the homes of billionaire financier and liberal activist George Soros, Hillary Clinton and former President Obama.

Miller and FBI officials said the devices all appeared to be crude pipe bombs.

Miller said it began on Monday night with the device sent to Soros and that they're looking at the devices as a pattern.

Gov. Andrew Cuomo said he would not be surprised if more devices are found.

"An act of terror"

"But the people of this city have shown time and again that they stand up in the face of terror," he tweeted.

New York Gov. Andrew Cuomo said "we will not allow these terrorist thugs to change the way we live our lives."

The package was addressed to former CIA Director John Brennan at CNN. Since leaving government, Brennan appears on television, but he works as an analyst for NBC News.

The package was found in the building's mailroom. It was described as a pipe with wires and was sent through the U.S. Postal Service, CBS New York reported.

A photo obtained by CBS News shows the device and a package addressed to John Brennan. The return address was listed as Debbie Wasserman Schultz, although there is no reason to believe she actually sent the package.

"These terrorizing acts are despicable, and anyone responsible will be held accountable to the fullest extent of the law," Sanders said in a statement Wednesday morning. "The United States Secret Service and other law enforcement agencies are investigating and will take all appropriate actions to protect anyone threatened by these cowards."

Vice President Mike Pence said in a tweet this morning "We condemn the attempted attacks against fmr Pres Obama, the Clintons, @CNN & others. These cowardly actions are despicable & have no place in this Country."

There was no sign of increased security at outside the offices of local high-profile Democrats Sen. Diane Feinstein or Rep. Nancy Pelosi. Their offices declined to comment.

The San Francisco office of the FBI tells KPIX 5 there is no currently threat in the Bay Area. All of the packages were sent to the east coast with the exception of the suspicious package found in Los Angeles early Wednesday evening.

However, the FBI says the public should be vigilant as packages may have been sent to other locations.

There were several evacuations in California due to suspicions packages that turned out to be a false alarm, including one at a CBS station in Fresno and at the San Diego Union Tribune.