Investigators said the incident began with calls at 9:48 p.m. on March 23 reporting an argument, possible shooting and related vehicle collision in the area of Roberts Ave. and Sebastopol Rd.

Arriving officers located a vehicle that appeared to have crashed into a tent in homeless encampment on the east side of Roberts Ave. 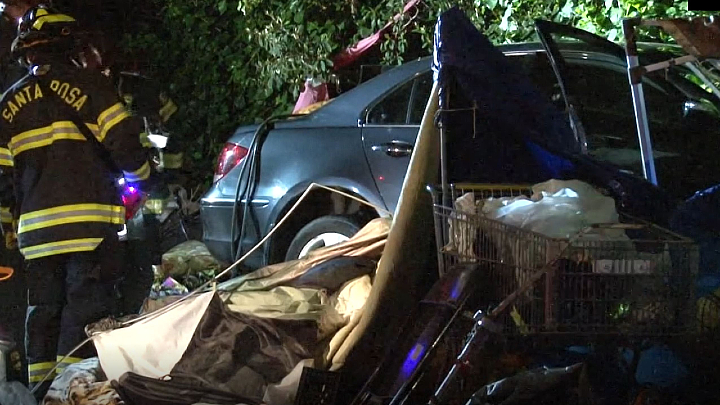 "When we contacted the people here, we found one person under the vehicle," said Santa Rosa Sgt. Christopher Mahurin.

The coroner's office identified Kellie as the crash victim. The driver of the vehicle -- later identified as Adams -- fled on foot prior to officers arriving on scene. A search of the area failed to locate him.

Investigators have determined that there was a heated argument between Adams and another man. Adams then allegedly got into a vehicle and began driving southbound on Roberts Ave. The vehicle drove across the eastbound lanes of Roberts Ave. and slammed into Kellie.

Through their investigation, detectives identified Adams, a 53-year-old male from Santa Rosa, as the primary suspect. He is now wanted for homicide and attempt homicide.

Anyone with information to assist with the investigation or provide Adams' location, is encouraged to contact the Santa Rosa Police Department through our online Tip Line: www.srcity.org/CrimeTips or the SRPD Communications Center 707-528-5222.

A reward up to $2,500 is being offered by the Sonoma County Alliance Community Engagement and Safety Rewards Fund.