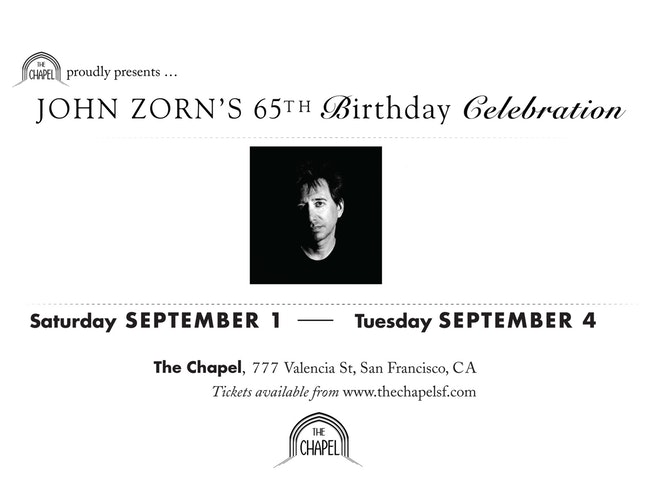 An important avant-garde composer and saxophonist who first broke out in the mid-1970s in New York, Zorn has been the object of both ecstatic praise and furious outrage, much like his forebears Igor Stravinsky and Ornette Coleman. Taking an omnivorous approach to music that draws on everything from classical, free jazz, and film soundtracks to lounge exotica, experimental noise and hardcore punk, the native New Yorker embraces a radical aesthetic that makes listener indifference nearly impossible.

Influenced by maverick jazz composer Anthony Braxton, Zorn studied music under experimental saxophonist (and future member of the World Saxophone Quartet) Oliver Lake in St. Louis before eventually returning to his hometown of New York City in the early '70s. Immersing himself in the underground downtown art scene, the saxophonist developed his howling, abrasive playing style while exploring structured improvisation with a series of what he called "game pieces" that required players to adhere to strict rules and cues. Recordings of those game pieces (usually named after actual sports) along with some other improvisations issued on cassette by fringe guitarist Eugene Chadbourne were the first albums produced by Zorn.

He would come to wider recognition in the mid-1980s with albums he released on the modern classical and minimalist focused Nonesuch Records label. His tribute to Italian film composer Ennio Morricone The Big Gundown that featured Zorn's radical reworking of classic spaghetti western and crime movie themes in 1986 and Spy vs. Spy, his hardcore punk set of Ornette Coleman songs three years later, further established the musician as one of the most important American figures in experimental music.

During the '90s, few artists could match the constant output of recordings produced by Zorn from middecade forward. In addition to a string of albums featuring his chamber and orchestral music in the wake of Naked City's dissolution in 1993 and Painkiller -- the improv/grindcore collaboration with bassist Bill Laswell and former Napalm Death drummer Mick Harris -- the composer launched his Masada project aimed at exploring and expanding the Jewish musical tradition into the 21st century.

He formed his acoustic Masada quartet with Baron, longtime Tom Waits bassist Greg Cohen and acclaimed trumpet player Dave Douglas, recording a torrent of studio albums and touring the world to present his modern jazz exploration of Sephardic scales and rhythms. The Masada songbook would grow through the decade as Zorn churned out compositions and recorded them with a myriad of bands including the Bar Kokhba Sextet, the Masada String Trio and others.

A second Masada songbook would be tracked by an even wider range of collaborators on a series of CDs covering over 30 volumes. This period of increased productivity would coincide with Zorn founding not-for-profit, artist-focused experimental performance space the Stone in New York City, a venue that Zorn continues to work with as artistic director. Earlier this year, the venue had its final performances at its original Alphabet City location earlier this year with plans to move to the New School's The Glass Box Theatre in Greenwich Village.

Zorn has made two appearances at the Chapel in recent months, playing improvised duo sets with longtime collaborator and Bay Area vocal experimentalist Mike Patton of Faith No More/Mr. Bungle fame and renowned NYC producer and bassist Bill Laswell at the venue that paved the way for this historic set of concerts.

The run of shows at the Chapel to celebrate Zorn's 65th birthday was initially announced with six shows scheduled over the course of the four nights. The residency will include a variety of ensembles performing Zorn's music -- including new compositions -- as well several sets where Zorn will be playing onstage with an all-star group of musicians. Saturday's early show will present the debut performances of music from The Bagatelles, a book of 300 new songs the composer released in 2015, followed by a late show exploring all three Masada songbooks including a performance by the saxophonist's celebrated Masada Quartet featuring Douglas, Cohen and drummer Kenny Wollesen.

On Sunday, the early show serves as a benefit for the Stone focuses on improvisation with Zorn and Patton reprising their manic duo set in addition to performances by the trio Simulacrum let by organ maestro John Medeski (of the jazz-funk trio Medeski, Martin and Wood) including a set with Lombardo joining the group. Later, former Mr. Bungle guitarist Trey Spruance's esoteric Middle Eastern surf/death metal outfit Secret Chiefs 3 and Simulacrum guitarist Matt Hollenberg's Philly-based avant-metal band Cleric will both perform music from the Book Beri'ah, the final Masada songbook currently being prepared for release as a special limited 11 CD box set.

Monday will include a later addition to the residency with the early 6 p.m. show featuring Zorn performing with a special trio that includes fellow downtown NYC artist Laurie Anderson on vocals and viola and pioneering minimalist composer and pianist Terry Riley, followed by an 8 p.m. show featuring a six-piece strings and percussion ensemble playing new chamber music drawn from the album Interpretation of Dreams and other recent efforts by Zorn.

The residency comes to a close Tuesday night with pianist Brian Marsella offering music from both the Masada and Bagatelles songbooks with two different ensembles and a solo set. The Chapel is offering discounts for tickets to attend two shows in a single evening and passes for the full seven-show residency. For more detailed information and tickets, visit the Chapel website.