SAN FRANCISCO (KPIX) -- The new year brought a disturbing discovery at the San Francisco home of U.S. House of Representatives Speaker Nancy Pelosi, where, early Friday morning, vandals spray-painted her house and left a severed pig's head in front of her garage.

The graffiti says "Cancel rent" and "We want everything" -- possibly referencing coronavirus stimulus checks. There was also a severed pig's head in a pool of red paint left in front of the garage door.

She wasn't the only lawmaker targeted.

Vandals also spray painted Senate Majority Leader Mitch McConnell's door in Kentucky on Saturday with "WERES MY MONEY." "MITCH KILLS THE POOR" scrawled over a window. A profanity directed at the Republican senator was painted under the mailbox.

McConnell released a statement on Saturday condemning the vandalism at his home in Louisville. 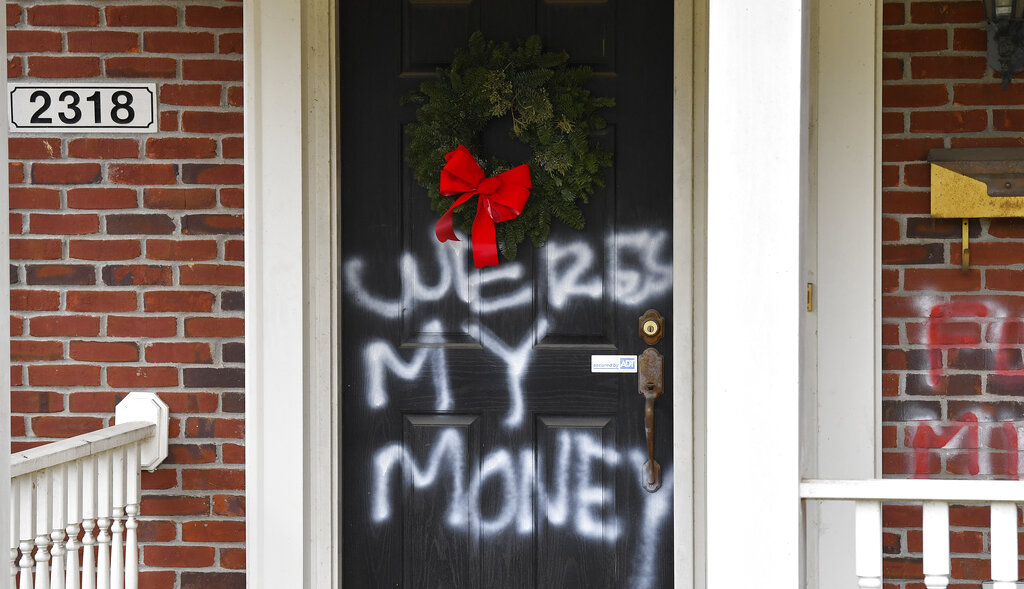 "I've spent my career fighting for the First Amendment and defending peaceful protest," he stated. "I appreciate every Kentuckian who has engaged in the democratic process whether they agree with me or not. This is different. Vandalism and the politics of fear have no place in our society."

Meanwhile, San Francisco police say they first got the call about the Pelosi vandalism around 2:00 a.m. on Friday. Speaker Pelosi was not home as she is currently in Washington D.C.

Neighbors say while they understand the frustration over politics on Capitol Hill and they say this type of vandalism doesn't help resolve anything.

"I don't think that this is a useful way to go about it and it's a terrible start to this new year, when we are hoping for less anger and hatred than we've had to deal with for the last year," said Audrey Carlson, a neighbor of Speaker Pelosi.

KPIX reached out to Speaker Pelosi's office for comment on the incident but has not heard back.

San Francisco police have not released any information about suspects in the case. Also, no one has come forward claiming responsibility for the vandalism. Some of the graffiti mentions UBI (universal basic income) and "cancel rent," so it is possible the culprit is someone associated with those movements.

Pelosi helped spearhead the passage a bill last Monday to increase the $600 stimulus checks to $2,000, with 275 members of the House of Representatives voting for the bill and 134 voting against it.

That bill, which marked a rare instance when President Donald Trump and Democratic representatives were in agreement on a topic, has since been held up in the U.S. Senate by Republican Majority Leader Sen. Mitch McConnell.