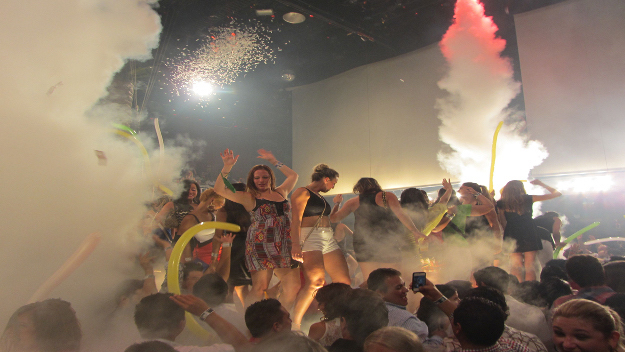 When people think of Ibiza, a couple of thoughts instantly come to mind. Some may note its the sheer number of stunning beaches, while some others will insist it's an incredible destination for water recreation. But for the vast majority of people, Ibiza is best known as the "party capital of the world" and during the peak season, it lives up to its hype. Featuring some of the world's most famous nightclubs, this island off the coast of Spain attracts partiers from all over the globe. However, all of the hottest clubs all close in early October and won't gear up again until late May to early June. To help partiers plan out a trip to the third largest island of the Balearic Islands, this travel guide provides information on how to get there, in addition to dining and lodging options and of course, many of the world's top nightclubs.

How To Get To Ibiza

Most visitors to Ibiza will fly into Ibiza Airport (Aeropuerto de Ibiza, located about miles west of Ibiza Town. Additionally, most flights to Ibiza are seasonal (late May to mid-October), although some airlines like Air Europa, British Airways and Iberia provide flights during the offseason. Among the other major airlines with flights to Ibiza Airport are Alitalia, Condor, Lufthansa, Norwegian Air Shuttle and Ryanair. Connecting flights can be made at several cities across Europe, including Amsterdam, Barcelona, Berlin, Frankfurt, London, Madrid and Paris.

From the airport, arriving passengers can find car rentals, taxi service or public bus service. Frequent bus service is available during the peak season from the airport to Ibiza Town (Eivissa) via Ibiza Bus route 10.

The most affordable way to get around Ibiza is by public transportation. Ibiza Bus offers several routes with service to most of the coastal towns, including Sant Antoni de Portmany, Sant Miguel de Balansat, Santa Eulalia and San Antonio. Fares are based upon the length of the trip and range from 1.55€ ($1.71) to 4.00€ ($4.41). During the evening, Ibiza Bus operates the Disco Bus to transport visitors to the top nightclubs, with single bus rides averaging 3.00€ ($3.30). A new timetable for the Disco Bus will be available online next year.

Another great way to travel about the island is with a reliable taxi service. For partiers traveling in groups, the fare can be quite affordable when everyone contributes their share of the expense. However, as with other world destinations, visitors must be mindful of possibly encountering a dishonest cab driver. Agreeing with a set price before entering the cab will help offset any disagreement with the driver. Additionally, websites like Taxi Auto Fare can be a great resource in advance of taking a cab in Ibiza.

Due to government regulations, Uber service is currently not available throughout Spain, including the Balearic islands. Visitors are encouraged to check the Uber website for up-to-date information.

A handful of limousine services are available for hire in Ibiza. Among the most prominent are IbizaHire and Ibiza Airport Shuttle.

There are literally hundreds of options for partiers in terms of lodging, from hostels under $50 per night to luxury suites tipping the scale at more than $1,000. The key to getting the right place is to start looking well in advance, as some of the most popular hotels may sell out in advance of a planned trip. The following are five recommendations for budget, moderate and luxury lodging. Additionally, groups of partiers may also want to look for a vacation rental from established websites like VRBO, Airbnb and Flipkey.

There are more than 1,200 restaurants scattered across the island of Ibiza, ranging from cheap eats to pricey celebrity hangouts. For affordable food, there are several well-known American-based fast food restaurants. But partiers are much better off enjoying authentic local cuisine, such as tapas and paella, the national dish of Spain served a variety of ways, including with seafood, vegetarian or chicken. On the higher end, an assortment of high profile restaurants attract well known celebrities, such as Cipriani in downtown Ibiza and Lio, a restaurant-cabaret just a casual stroll from one of the island's most famous nightclubs – Pacha.

The top draw for partiers to this island paradise is, of course, the incredibly large collection of world-class nightclubs. Spots like Space Ibiza, Pacha and Privilege are consistently mentioned among the best nightclubs on the planet, and the latter holds the distinction of being the world's largest nightclub. During the peak summer months, many of the world's most famous celebrities, such as Leonardo DiCaprio, Beyonce, Paris Hilton, Justin Bieber and Kim Kardashian can be seen mingling amongst other guests on any given night. In all there are more than 130 bars and nightclubs on the island with the heaviest concentrations in Ibiza Town and Santa Antoni de Portmany. Opening parties for nightclubs on Ibiza begin in June and culminate with lavish closing parties the first week of October. First time partiers to Ibiza nightclubs are advised that drinks at the high profile nightclubs average about 20.00€ (currently $22.38). One solution is to purchase a party package from travel specialists like Together Ibiza, Awaken Ibiza or Ibiza Rocks.

Although some nightclubs stay open until 6 a.m., there are plenty of other things to do besides party all night. Aside from the incomparable nightlife, tops on the list of things to do are the world-class beaches of Ibiza. Here are a few other suggestions to take in when partiers are looking for something else to do.