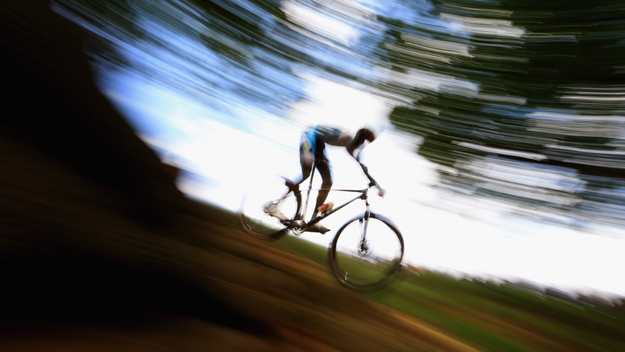 There's not much better than seeing America on a bicycle. Whether it's touring along the scenic Highway 1 along the Pacific Coast or trekking high up in the Colorado Rockies, the list of places for an unforgettable bike trip seems endless. Although hilly and challenging paths seem too difficult for the beginning cyclists, many of the nation's best bike routes have easy sections that are suitable for all ages and levels of ability as well as all types of bikes. Here are just five of the best bike destinations in America.

With stunning views of the West Coast and lush green forests of towering redwood trees, the Pacific Coast Route may be the country's most scenic bike route. Stretching 1,852 miles from Vancouver, Canada to Imperial Beach, near the California-Mexican border, highlights seem limitless as practically each new patch of road yields something different to behold. Despite the imposing length, the Pacific Coast Route is practical for bicyclists of all fitness levels, with several easy rides along the way, such as along the Great Highway in San Francisco and on the Pacific Coast Highway near Santa Monica. One of the most acclaimed sections of the route is the more challenging section along California Highway 1 between Monterey and Cambria with breathtaking views of the iconic Bixby Bridge and Big Sur. There are many flat sections near Pfeiffer State Park that can easily be enjoyed by beginners and intermediates.

Related: Spring Break Destinations On The Less Expensive Side

Moab may just be the ultimate American destination for mountain bikers. Located in eastern Utah, the small city filled with campgrounds serves as a gateway to two national parks surrounded by burnt red sandstone mountains with canyons and arches etched through time - Arches and Canyonlands. Although biking in Arches is restricted to paved and unpaved roadways, there are several points of interest to take in, particularly the world famous Delicate Arch, Fiery Furnace and Landscape Arch. Canyonlands features a vast network of bike trails suitable for beginners and intermediate levels to technical single-track and elite riders. However, the most famous and challenging local trail is the 10.6-mile Slickrock Trail, a few miles east of Moab in the Sand Flats Recreation Area. Further east is the 15.6-mile Porcupine Rim Trail, a top-ranked single-track course suitable only for cyclists with advanced skills.

Easily one of the country's best mountain bike destinations, Crested Butte is also home to the Mountain Bike Hall of Fame and one of Colorado's best ski resorts. Although the downtown Hall of Fame museum seems to credit Northern California as the birthplace of mountain biking, others herald Crested Butte as the leading "trailblazer." And in terms of sheer number of awestruck bike trails for all levels of ability, this area 225 miles southwest of Denver is hard to beat. The legendary 13.7-mile 401 Trail Loop, with its 2,264-foot ascent, Alpine tundra and awesome views of the Rocky Mountains, is one of the nation's top mountain bike trails.

Related: A Couple's 675-Day Honeymoon Across The World

There aren't many ways for cyclists to tour America's heartland better than getting their "kicks on Route 66." Known as the Mother Road, Route 66 was established in 1926 as one of the original U.S. highways connecting Los Angeles and Chicago over a of distance of 2,451 miles. In 2012, Adventure Cycling of America announced Bicycle Route 66 as its next long distance cycling route and expects to complete mapping the 2,500-mile system later this year. With miles of flat roads and quirky road attractions such as the Wigwam Motels in Holbrook, Arizona, Cadillac Ranch in Amarillo, Texas, the Route 66 Museum in Clinton, Oklahoma and Wall Drug in Wall, South Dakota, all levels of cyclists can embark upon the road tour of a lifetime along the original Main Street of America.

One of the just two original U.S. Bicycle Routes, the TransAmerica Trail isn't just a destination, it is the greatest and most traveled coast-to-coast bike route in the U.S. Spread over 4,232 miles, the eastward trip begins in Astoria along the Oregon coast, continues on through several states including Idaho, Colorado, Missouri and Illinois, before reaching the Eastern seaboard in historic Yorktown, Virginia. Established in 1976 during the nation's bicentennial celebrations, the cross-country trail features mountainous treks through the Cascades and the Rocky Mountains as well as the flatlands of Kansas. Other tour highlights include the Grand Tetons and Yellowstone National Parks and challenging rides through the Ozarks of Missouri and the Appalachians of Kentucky and Virginia.