SAN FRANCISCO (CBS SF) – With snowfall being predicted in feet instead of inches this week for the Sierra, the National Weather Service Tuesday issued an avalanche warning for the Lake Tahoe area.

The weather service said the avalanche danger "was high in all areas" in the warning.  The warning will go into effect at 4 p.m. and last through 7 a.m. Thursday.

Forecasters said the avalanche hazard would rise during the day Tuesday as snow rates were predicted to approach three inches per hour later Tuesday afternoon and evening. 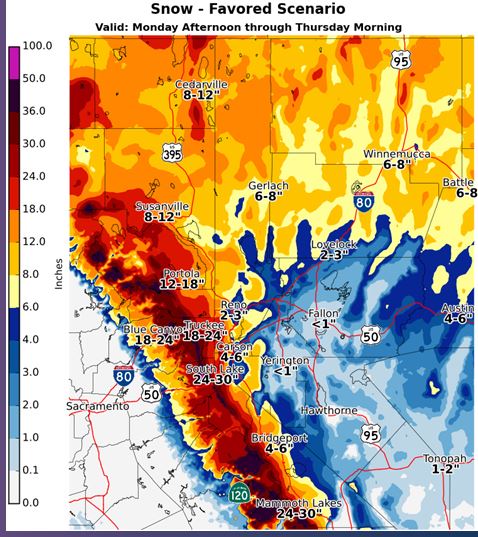 The warning was issued for the Sierra Nevada range in both California and Nevada including the Lake Tahoe Basin and Yuba Pass to Ebbetts Pass.

The weather service said crews in the ski areas and the mountain highway mountain passes would be executing their avalanche mitigation programs.

The Sierra Avalanche Center said the greatest dangers were on slopes 35 degrees and steeper.

Forecasters said conditions would deteriorate through Tuesday afternoon and warned drivers to avoid travel if at all possible as snowfall totals across the Sierra through Mono County could approach the 2 to 4 feet range by Thursday morning.

At lake level, 1 to 2 feet of snowfall will be possible through Thursday morning.

The heavy snowfall will combine with strong and gusty winds (up to 45 mph) that were expected to develop later Tuesday evening into Wednesday morning creating treacherous and dangerous driving  conditions with white-out conditions and zero visibility.