REDDING (CBS SF) -- California's governor made a direct request to President Donald Trump and FEMA Friday, asking for a Presidential Emergency Declaration to help Shasta County in the wake of the destructive Carr Fire.

Governor Jerry Brown on Friday announced he has sent a letter to President Trump and the Federal Emergency Management Agency (FEMA) requesting a Presidential Emergency Declaration for Direct Federal Assistance to further support the communities impacted by the Carr Fire in Shasta County.

"Supplemental federal assistance is necessary to save lives and to protect property, public health and safety, and to lessen the effects of this imminent catastrophe," Governor Brown said in the letter.

The massive firestorm that swept into the western suburbs of Redding early Friday morning continued its destructive path into the afternoon, consuming at least 125 homes, according to reports.

Earlier Friday, fire officials said 65 structures had been destroyed by the fast-moving blaze in Shasta County.

At AP reporter on Friday afternoon counted 66 burned homes in the Lake Redding Estates neighborhood and another 60 in nearby Lake Keswick Estates.

The huge blaze has already claimed the lives of two firefighters and forced over 37,000 residents to evacuate from Redding.

During a Friday afternoon press conference, Cal Fire officials said that "multiple branches" of the Carr fire are continuing to burn out of control.

Press conference begins at 7:15 mark in above video

Cal Fire Director Ken Pimlott warned that the Carr Fire was "a long way from being done" and told residents to stay conscious and aware of evacuation orders.

"These are extreme conditions. This is how fires are burning in California. We need to take heed. Evacuate, evacuate, evacuate," said Pimplott. "Pay attention to social media. Leave early. Don't wait until you see the fire."

On Thursday along Highway 299 -- from Redding to Whiskeytown – the Carr Fire continued to destroy what it had not consumed the night before.

"We have a lot of active fire lines still on the north west and east ends of this fire," said Cal Fire Division Chief Chris Anthony. "This fire is still burning actively on many different flanks."

In some areas, there really was not much left to burn. Many of the neighborhoods lining Highway 299 saw tremendous devastation. Surviving homes were often the exception to the rule.

"Right before, we left we put sprinklers on. Which is what I think saved these houses, 'cause the next five are gone," said homeowner Will Gordon.

In other areas, Cal Fire seemed to stop the flames in their tracks, fighting back a fire that has shown a tendency to get more active late in the day.

"Most of the activity we've had on this fire has come in the late afternoon, early evening," said Cal Fires Robert Foxworthy.

The conditions that are fueling that behavior show no signs of letting up this weekend as the battle continues.

"So we really don't see a break in the weather over the next couple days," said Anthony.

Driving through the smoky haze of west Redding, the annihilation reveals itself with street after street of destroyed homes.

Tom Mahan talked about what it was like when he ran into a burning neighborhood Thursday to help save the home of his friend, firefighter Donovan Lee.

"Devastating. Homes were exploding, cars were exploding," said Mahan. "First thing that I seen was an RV trying to come out with all the evacuees. It was…you could tell he was driving frantic. And as he entered the intersection, he actually hit a sheriff squad car and drug it about 200 feet."

On Friday, Redding resident Anthony Traficante drove up to a ridge to find out if his girlfriend's house was safe.  It wasn't.

"My girlfriend was screaming in horror. She was asking me, Is this my house? Is this my house?" said Traficante. "And I wanted not to say anything until I was sure. But at some point, it became apparent."

California Governor's Office of Emergency Services spokesman Kelly Huston says they are coordinating bringing in aircraft from the California National Guard to help fight the flames.

Officials say the extremely erratic wildfire in and around the city of Redding is growing rapidly amid scorching temperatures, low humidity and windy conditions. Temperatures are forecast to reach 110 on Friday.

Huston says officials are moving emergency supplies including cots and food to four shelters set up in Shasta County. He says the shelters are preparing for what could be a "longer-term" event.

Cal Fire spokesman Scott McLean said that crews had earlier found the body of a bulldozer operator who was hired privately to clear vegetation in the blaze's path. The fire burned over the operator and his equipment, making the man the second bulldozer operator killed in a California blaze in less than two weeks.

Other firefighters and an unknown number of civilians had burns, but the extent of their injuries wasn't immediately known, McLean said.

Marin County Battalion Chief Brett McTigue said three of his agency's firefighters were injured when a "heat blast" overtook their engine as they were protecting homes.

The three were assigned to the same engine company, operating as a strike team. They were taken to Mercy Hospital in Redding, where two were treated and released. The third has been transferred to UC Davis Burn Center. Their injuries were burns to face, ears, and hands.

"At this time we are focusing on the health of our firefighters and ensuring peer support is in place for the members of the strike team. Our thoughts and prayers go out to the families of the two firefighters that lost their lives yesterday battling the same fire" Chief Jason Weber said.

As its officers were going door-to-door to help people escape the flames late Thursday, the California Highway Patrol took to Facebook to urge residents to leave.

"The fire is creating a huge wind vacuum and moving very rapidly toward west Redding. This fire is out of control!," the agency wrote. "If you see heavy smoke or flames and feel threatened, leave... don't wait for evacuation calls."

Among those who fled their homes was Alistair Sullivan. On Friday, he stood amid the smoldering ruins of what was left of his neighborhood.

"This came out of nowhere," he told KPIX 5. "(All that's left of my house) is a basketball hoop. That's all just ashes and burnt metal. This was a really beautiful neighborhood...It's pretty tragic. You try to grab things that you think are pretty important...Then you leave and you think -- 'Oh sh.., I should have grabbed that."

Sullivan had heard the flames had jumped the Sacramento River at around 7:45 p.m. He was heading home when he saw his neighbors clogging the street, fleeing the oncoming fire.

"To could see the helicopters, there were flames at the end of Harlan," he said. "When I got to the house, the cops were already there saying -- 'You're leaving right?' I ran in and grabbed my papers."

Gregg Hartley and his wife Claudia grabbed their dogs and also fled the flames.

"We saw people just scrambling to get out (of their neighborhood)," Gregg Hartley said. "The police were yelling -- 'Evacuate! Evacuate!' It looked like Armageddon."

As of dawn, Cal Fire said the Carr Fire had grown to 44,450 acres and was just 3 percent contained.

At least 65 homes had been destroyed, but a walk through at least one neighborhood revealed dozens more reduced to ash and rubble. Cal Fire spokesman Scott Kenney said Friday morning that the blaze was threatening another 5,000 homes and buildings.

Cal Fire said the 'mechanical failure of a vehicle' was the source of the blaze. 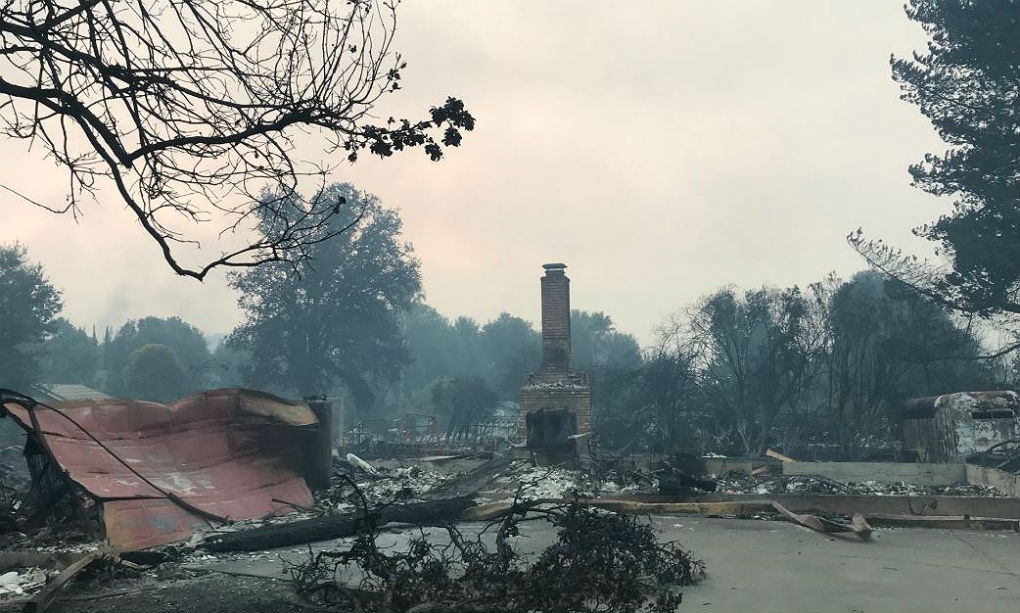 Mercy Medical Center spokesman Mike Mangas told the Redding Record Searchlight that the hospital was not being evacuated yet, but they were getting newborns ready, in case they needed to be taken to another hospital.

Patients in the Intensive Care Unit were also being prepared for transfer.

McLean said flames swept through the communities of Shasta and Keswick before jumping the Sacramento River and reaching Redding, a city of about 92,000 people — the largest in the region. 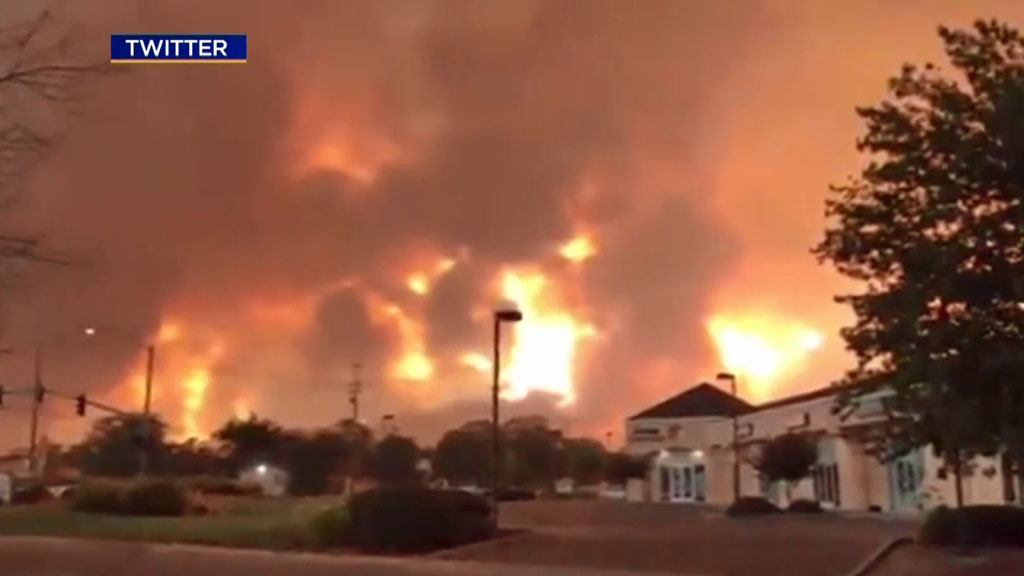 McLean said many people in Redding didn't seem prepared for the blaze to reach their city.

"When it hit, people were really scrambling," he said. "There was not much of a warning."

Traffic out of the city was backed up, with drives that normally take 20 minutes reaching two and a half hours long as residents fled to safety.