OAKLAND (CBS SF) -- Less than 24 hours after he agreed to play next season for the Brooklyn Nets, Golden State Warriors co-chairman and CEO Joe Lacob announced Monday that the team would retire departing superstar Kevin Durant's No. 35 jersey.

Lacob said the Warriors wanted to "thank KD for all of his contributions, for being an integral part to one of the most prolific runs in NBA history."

"Three years ago, we were thrilled with the arrival of Kevin Durant, a transformative NBA player and one of the best to ever play the game," the Warriors CEO said in a prepared statement. "He provided our fans and franchise with numerous highlights during his stay here—two NBA championships, two NBA Finals MVPs, three trips to the Finals, unparalleled efficiency—and carried himself with class and dignity both on and off the court."

Lacob added that "As long as I am Co-Chairman of this team, no player will ever wear #35 for the Warriors again."

Sunday was a pivotal day for the Warriors franchise. They lost Durant to free agency when he agreed to a four-year deal with the Nets. The club came to agreement with injured star Klay Thompson on a five year, $190 million max contract, and then traded key sixth man Andre Iguodala to Memphis.

On Monday, Thompson announced his intentions to be a Warrior for life by posting on Instagram a video clip of Leo DiCaprio's speech from the movie 'Wolf of Wall Street.' Teammate Steph Curry responded: "Let's go bro! Congrats"

They ended the day by acquiring All-Star D'Angelo Russell from the Nets as part of a four-year, $117 million max contract sign-and-trade deal.

The Warriors also made offers to two of their young restricted free agents -- Jordan Bell and Quinn Cook and the club agreed to sit down and talk about a new contract with Kevon Looney.

Durant made the official announcement of his departure late Sunday night on his "The Boardroom" Instagram page. 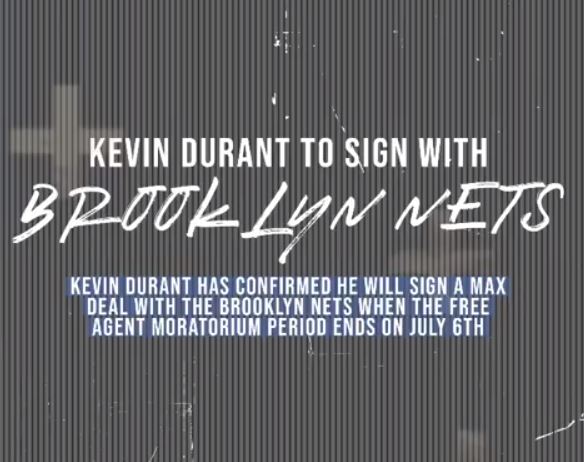 He will be joining fellow free agent Kyrie Irving on the Nets, ESPN insider Andrian Wojnarowski and others reported.

Wojnarowski said Durant has informed the Warriors of his decision.

"Kevin Durant and his business manager Rich Kleiman met with Warriors GM Bob Myers Sunday in New York and delivered him the news on the decision to leave Golden State, league sources tell ESPN," he tweeted.

Durant likely will take the court for the Nets during the 2019-2020 season. He is currently rehabilitating a torn Achilles tendon.

Durant played brilliantly, scoring 11 points before his Achilles gave out while making a move on the court. He underwent surgery in New York to reattach the Achilles and was expected to miss all or nearly all of the 2019-2020 season.

A 10-time All-Star who just completed his 12th NBA season, Durant was leading all postseason scorers at 34.2 points per game when he injured the calf. He had seven 30-point performances during the recent playoffs.