PLACERVILLE (CBS SF & AP) – A portion of Highway 50 in the Sierra collapsed Tuesday, endangering the entire roadway and closing down a major traffic artery through the mountains, officials said.

Photos published by the CHP Placerville office showed a gaping hole where the shoulder of westbound Highway 50, east of Bridal Veil Falls in El Dorado County, lane No. 1 collapsed and the No. 2 lane buckling. 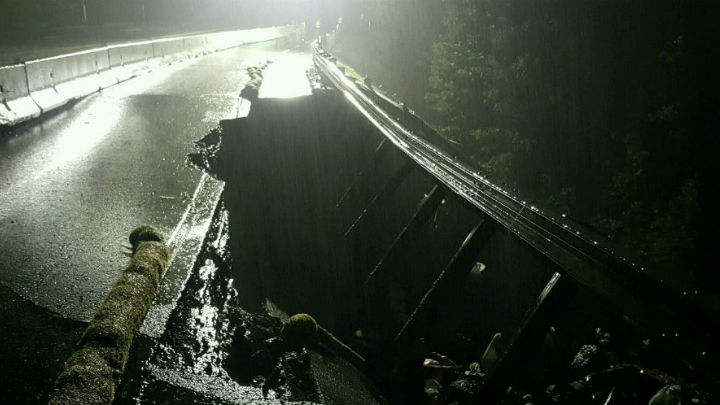 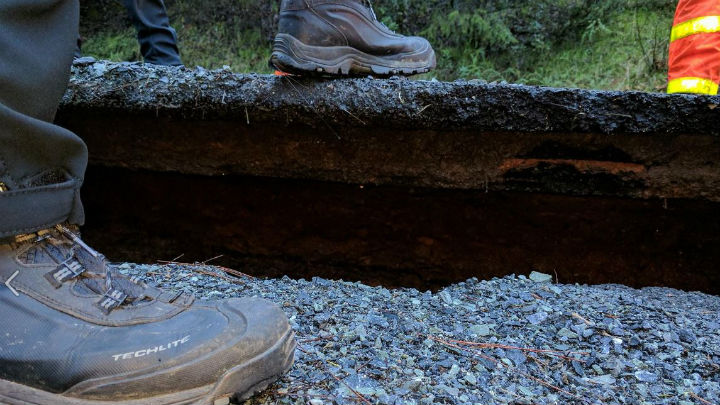 On the other major highway in the Sierra -- I-80 -- white-out snow conditions had triggered several accidents that forced the CHP to shut it down.

CalTrans Donner Pass Superintendent Dave Wood urged all travelers to avoid the area Tuesday. He said the conditions are "fierce."

An avalanche has also buried the main mountain highway between Reno and Lake Tahoe beneath some 20 feet of snow, but no injuries were reported.

Nevada Highway Patrol Trooper Dan Gordon said Tuesday there are no immediate reports that any motorists or vehicles were trapped in the snow slide near the crest of Mount Rose Highway.

He said the avalanche was reported about 9:15 p.m. Monday, and there's no estimate yet when the road will reopen.

California Highway Patrol in Truckee was reporting Tuesday evening that whiteout conditions had shut down I-80 in both directions.

Westbound I-80 was closed at the Nevada State Line, while eastbound was closed in Colfax. There was no projected time for the freeway to reopen.

More than 3 feet of snow has fallen in the last 24 hours and up to another 2 feet is possible into Wednesday. A winter storm warning remains in effect until 4:30 a.m. Wednesday.

A mix of rain and snow continues to fall in the valleys from Carson City to Reno. A record 1.05 inches of rain fell at Reno Tahoe Airport on Monday. The old record of 0.67 was set in 1992.

TM and © Copyright 2017 CBS Radio Inc. and its relevant subsidiaries. CBS RADIO and EYE Logo TM and Copyright 2017 CBS Broadcasting Inc. Used under license. All Rights Reserved. This material may not be published, broadcast, rewritten. The Associated Press contributed to this report.