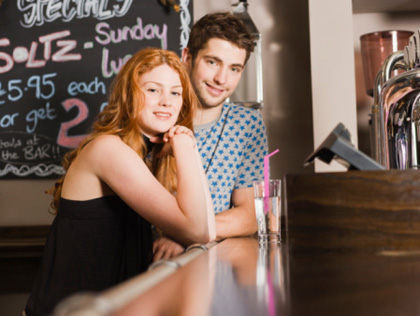 If your attempt at Match.com didn't light any fires, OK Cupid's arrow has poor aim and eHarmony meet-ups are way off key, maybe it's time to say hello the old fashioned way -- over tasty bar bites, a pint on draft or a chilled glass of Chardonnay. If you call Silicon Valley home, perhaps you'll chat about apps in one of the Peninsula's best bars for singles. If BART and the East Bay is handier, here are a few mainstream suggestions from local singles who give these spots a shout out for easy access, good food, good drinks and plain old good times. The East Bay is full of trivia night options too, so if you're feeling terribly clever, there are people who want to meet you.

Do you think beer tastes better when produced by monastic Belgian brewmasters on the grounds of their medieval monastery? You're probably right. Friendly, knowledgeable bartenders pour from the "99 Bottles of Beer On the Wall" or from 28 taps. Follow them @TheTrappist and you'll see that the emphasis on beauties being discussed are hops and sours, not the singles scene. But, know your beers and you'll not be lacking for a conversation ice-breaker either at the busy bar or outside on the patio.

Since day one in May 2012, the front door swings open frequently at the cavernous space where the first drinks are served at 5 p.m. DJ Jose Ruiz makes use of the good sound system, spinning his south-of-the-border playlist Thursdays from 6:30 p.m. You'll want to head out to the covered garden where heat lamps and a fire pit keep it warm, strings of party lights keep it jolly and a rolling bar of margaritas and snacks keep the crowd watered and fed. You could even return for a first date, as Michael Bauer singles out Chef Matt Gandin's roast turkey dish as one of his favorite 10 Mexican meals in the Bay Area.

Two things to know to begin with are the inventive menu of hot and gooey grilled cheese selections and the 1:45 a.m. closing every night but Sunday when it's slightly earlier at 1 a.m. A bunch of descriptive keywords about this corner bar begin with the letter C: crafted cocktails, charcuterie and cheese, pus cute, cozy and classy. It's small and fills up quickly, weeknights included. The website calls it intimate. This could easily be the best bar with the best bar food in Uptown Oakland.

"We give you a big hug," says owner Michael LeBlanc. Yes, the New Orleans-inspired food is just great, but a round of warm cornbread with crafted cocktails at the bar isn't a bad way to go, either. Bourbon lovers are dazzled by a selection of no fewer than 106 of the brown whiskey spirits. A signature Tennessee margarita or a classic old fashioned are two ways to go at the sleek bar with low-slung black leather chairs. Bring a date, meet your date or make a new friend. The point is southern-style conviviality.

What's brewing in the East Bay? Read all about it in bold face type on the menu at this historic spot opened last year by the Chop Bar and Grand Tavern folks. The expansive (4,000 sq. ft.) space is in the base of the landmark former newspaper tower. Happy hour is 3 p.m. to 6 p.m. daily at the bar where Downtown Oakland hangs after work, sometimes skiving off early to indulge in a liquid "Stolen Afternoon" (Hibiscus Casa Noble Blanco Tequila, Earl Grey Tincture, Lemon Confiture). Late nights means you can swap numbers until 1 a.m., except on Sundays.

Related: Best Places To Go On A Luxurious Weekend In The East Bay
Laurie Jo Miller Farr loves walkable cities. A tourism industry professional and transplanted New Yorker by way of half-a-lifetime in London, she's writing about the best of the bay and beyond for Yahoo, USA Today, eHow, and on Examiner.com.