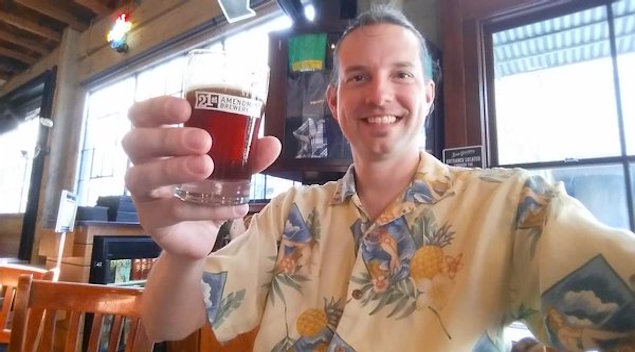 Have you ever thought about brewing your own beer? You might be surprised that it's neither as difficult or expensive as it may seem. But if you're a novice and starting out from scratch, it helps to get some tips from a leading brewing expert, such as David "Zambo" Zamborski, head brewer of 21st Amendment Brewery in San Francisco. Here are five of his valuable tips to help you on your way to making your own brew at home.

David "Zambo" Zamborski is the passionate and dedicated head brewer of the award-winning 21st Amendment Brewery. Located just two blocks from AT&T Park, the popular brewery was named after the constitutional amendment that repealed the prohibition of alcohol in 1933. Founded in 2000 by Nico Freccia and "Chief Hop Head" Shaun O'Sullivan, 21st Amendment Brewery has won a number of awards, including a gold medal from the 2010 World Beer Cup, known as the world's most prestigious beer competition. Last August, 21st Amendment Brewery opened a new brewery and tasting room in San Leandro.

Choose a fun style, but don't shoot for the moon. Hefeweizens are very forgiving brew; the yeast is resilient and you desire the cloudiness in the finished beer. American Pale Ales are a great way to explore the beautiful world of hops. A beginner will learn faster with traditional styles than with experimental ones. Don't just go for ABV in your first beers and for God's sake, stay away from lagers!

You've seen how easy chefs make their job look on cooking shows by having all ingredients within arm's reach and ready to use -- do the same when brewing. Also, make sure all of your equipment is clean and get your yeast going the day before, which leads to the next point.

Yeast health is very important in achieving predictable results. If you get a kit, the dry yeast in the kit includes a lot of dead yeast cells. There are instructions online or at your local homebrew store for a making a basic yeast starter, and it only takes 20 minutes. Do this the day before you plan to brew once you've gotten the process down.

There is no day like brew day, so make it your own and enjoy it! I recommend having a few different brands in the same style or genre as the one you are brewing -- which are hopefully American Craft Beers! Have a few when you are planning and have the rest on the brew day. My neighbors could always smell when I had reached the boil stage and would come a knockin', knowing I had some good beers to pour!

Homebrew clubs are everywhere. You'll receive constructive criticism within this diverse group of individuals who share a common passion and your beers will exponentially improve. Also, if you live near a small independent brewery, take them samples for feedback and ask if they ever take volunteers on brew day!

If you've never homebrewed, I encourage you to try it. You will be part of a grand tradition! Beer has accompanied world explorers for thousands of years and our country was founded by brewers. We have innovated the industry with the American Craft Beer movement.