SAN FRANCISCO (CBS SF) -- When civil rights leader Reverend Jesse Jackson put dozens of investors with money to spend and bright African-American and Latino entrepreneurs with start-ups to fund in a room together, good things happened -- the kind of good that can reshape our world.

In fact, good things happened over and over at the PUSHTech2020 Summit, at San Francisco's Hyatt Regency.

Silicon Valley business leaders, venture capitalists, investors, innovators listened with rapt attention as one-by-one, these dynamic innovators pitched their ideas, using on-screen graphics, data, statistics and the power of persuasion. Like speed dating, each candidate was given short amount of time to woo the investors, and investors were given had only a few minutes to ask questions and form their opinions.

The pitches were wide-ranging -- a human data project connecting patients to clinical trials, a smart video that monitors your vital signs, an online study hall with tutors for students, ten in all. The judges included execs from Cisco, Google, Salesforce, Comcast and others. They evaluated each pitch based on the attractiveness of the market, product innovation, differentiation, and the ability to execute.

Meanwhile outside the pitch rooms, hundreds networked in the halls and auditoriums, attended break-out sessions with industry leaders discussing the how-to's and wherefores of an industry in dire need of diversification. Not just how to break in, or how to stay in once you're there, but how to lead the way for others to follow. Panelists were CEOs, VPs and managers at companies like Twitter, Apple, HP, Intel, Pandora, Yelp, Google, Johnson Publishing, RocketLawyer -- the list goes on and on. Rarely have so many tech leaders of color been assembled under one roof.

Speaking to hundreds of attendees, Jackson reiterated his call for more women, blacks and Latinos in the tech sector. He described his mission in Silicon Valley as "another stage in a civil rights symphony." 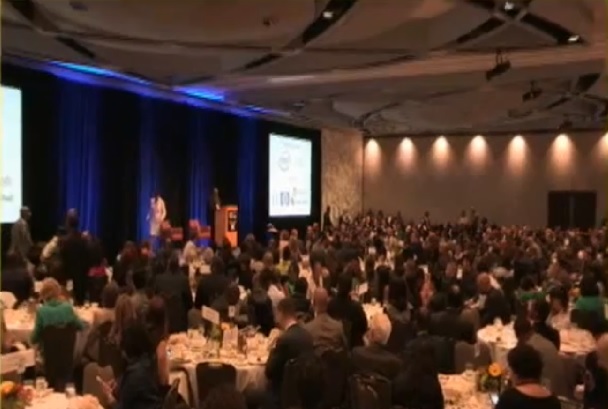 Since Jackson began his crusade for more diversity in Silicon Valley, attending shareholders meetings and demanding transparency on companies' employment data, he's formed alliances with companies like Intel and Google and partnered with the Kapor Center for Social Impact ensure that real change happens.

"There is not a talent deficit, there is a an opportunity deficit. Rainbow PUSH seeks to match talent and opportunity, investors and innovator," says Jackson.

That's exactly what happened in one of those pitch sessions.

The winning start up pitch was eHarvestHub, founded by Alvaro Ramirez, a graduate from Colorado Technical University who created an application to help small farmers increase their profits by connecting them directly with retailers and truckers. His company was awarded $10,000 via Salesforce Ventures. But more important than any award, now the low-tech world of farmers has a "virtual footprint in the digital supply chain." Never before would we utter 'farming,' 'produce,' 'software' and 'cloud technology' in the same sentence.

And that is a good thing, indeed.