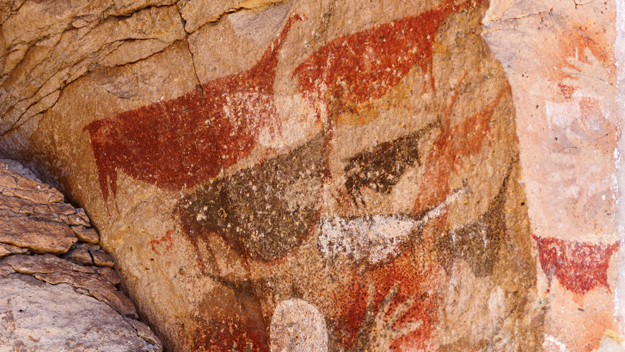 Dating back some 40,000 years, cave paintings are among the greatest and most fascinating discoveries of human culture. Found all over the world, including more than 300 in Europe alone, cave paintings have been analyzed and interpreted ever since first known form of parietal art was discovered in 1870 in Altamira, Spain. However, the nature of the drawings, etchings and carvings traced to the Paleolithic era and the dawn of man are still up for considerable debate. Although access is generally restricted to avoid compromising the delicate discoveries, here are seven of the best places in the world to view ancient cave paintings or its facsimile.

Situated near the historic city of Santillana del Mar in Northern Spain, the Cave of Altamira (high view) is one of the world's most important locations for Upper Paleolithic cave paintings. Nearly 1,000 feet long with multiple chambers, the cave was discovered in 1879 by an amateur archeologist and its polychrome rock paintings of mammals like bison, horses and human hands are estimated to be more than 35,000 years old. In order to preserve the world-renowned site, Altamira was first closed to the public in 1977, only to reopen and close a number of times before its current status allowing visiting only by selection via a daily lottery. Named a UNESCO World Heritage Site, Altamira was the world's first place where the existence of rock art from the Later Stone Age (LSA) was identified. Fortunately, visitors also have the option to visit Altamira Museum near Santillana del Mar which is accessible by car or bus.

Related: Travel To The Wonders Of The World
Chauvet Cave

Discovered in late 1994, Chauvet Cave is the location for one of the oldest and best-preserved collections of prehistoric paintings in the world. Located near Vallon-Pont-d'Arc in the Ardeche region of southern France, the cave measures more than 430 feet long and has been traced back to the Aurignacian Period more than 36,000 years ago. More than 1,000 images, including the famous Horse Panel and the Panel of Lions, have been chronicled since its discovery in 1994. It also features drawings of other animal species including mammoths, rhinoceroses, red bears and deer. Although the cave has always been closed to the public, a replica tourist attraction known as Caverne du Pont d'Arc opened last year is just six miles away. Visitors can reach Pont d'Arc Cavern by taking a train to Valence TGV or Montelimar, then transferring to a Rhone-Alpes bus to Vallon Pont d'Arc, where free shuttles are provided for the final leg of the journey.

Named after the stenciled hand images created by indigenous people, Cueva de las Manos (Cave of the Hands) is the site for arguably the most famous prehistoric cave paintings in South America. Located in the southern Argentine province of Santa Cruz, Cueva de las Manos was discovered in 1941 and holds hundreds of fascinating rock art depictions, including images of native wildlife like the llama-like guanaco and rhea (flightless bird), in addition to the world-famous stencils of human hands. A UNESCO World Heritage Site since 1999, the cave's prehistoric artwork is estimated to be between 9,500 to 13,000 years old. Cuevas de las Manos is open daily to the public and can be reached via car or a local tour operator.

Located about 15 miles from the Cave of Altamira in northern Spain, Cueva de El Castillo (Cave of the Castle) is the site for the world's oldest known collection of prehistoric art. Using radiocarbon dating, El Castillo is estimated to be more than 40,800 years old and holds more than 150 paintings, including stenciled hands like Argentina's Cueva de las Manos, as well as depictions of animals, including horses, deer, mammoths and dogs. Surprisingly, El Castillo is open to the public and reservations are strongly recommended. Discovered in 1903, the cave is accessible by car or by foot from the center of the Puente Viesgo municipal district, located within the autonomous community of Cantabria.

Fumane Cave (Grotta di Fumane) is not nearly as famous as some of its other European counterparts. However, it's no less important in the world's finest examples of prehistoric cave art. Located near Verona in northern Italy, the Fumane Cave paintings showcase the oldest known form of art in the country, created more than 30,000 years before the birth of the Roman Empire. Discovered in 1964 in the municipality of Fumane, Grotta di Fumane contains paintings and prehistoric artifacts that are estimated to be 35,000 years old by using radiometric dating. Despite the ongoing excavations and analysis conducted by the University of Ferrara, Fumane Cave remains open to the public, although driving by car appears to be the only means of getting there.

Often called the "prehistoric Sistine Chapel," Lascaux Cave in southwestern France is one of the world's most famous and studied prehistoric caves. Discovered by four teenagers in 1940 during the Nazi occupation of France, Lascaux is a complex of caves, featuring more than 600 paintings and nearly 1,500 engravings dating back to the Upper Paleolithic period, between 15,000 to 17,000 years ago. A national historical monument since its accidental discovery and a UNESCO World Heritage Site since 1979, Lascaux is world acclaimed for its exceptionally well-preserved cave paintings, which include depictions of deer, felines, several horses and, most prominently, the aurochs (extinct black bulls) in the famous Hall of the Bulls. Opened to the public shortly after World War II, Lascaux Cave experienced a number of environmental problems attributed to visitors and subsequently closed in 1963. In its place is a replica cave known as Lascaux II, which was built in 1983 and is just a short walk away. Located outside the city of Montignac, the best way to visit Lascaux is by rental car or with an organized tour. The closest train station is in Condat-Le-Lardin six miles away, from which point visitors can take a taxi to complete the journey.

Located in northwestern Bulgaria, Magura Cave holds one of the most important displays of prehistoric cave paintings in Central Europe. Magura Cave is also one of the longest caves in the Balkan country, extending more than 1.5 miles with a paved underground pathway, electrical lighting and wide enough to host annual holiday music concerts. More than 750 post-Paleolithic paintings have been cataloged and date back to approximately 8,000 years B.C. Surprisingly, Magura Cave is a notable tourist attraction in the Balkan Peninsula. Located in the southwestern section of the country near Serbia, Magura Cave is a three-hour drive from Sofia, the capital and largest city of Bulgaria.