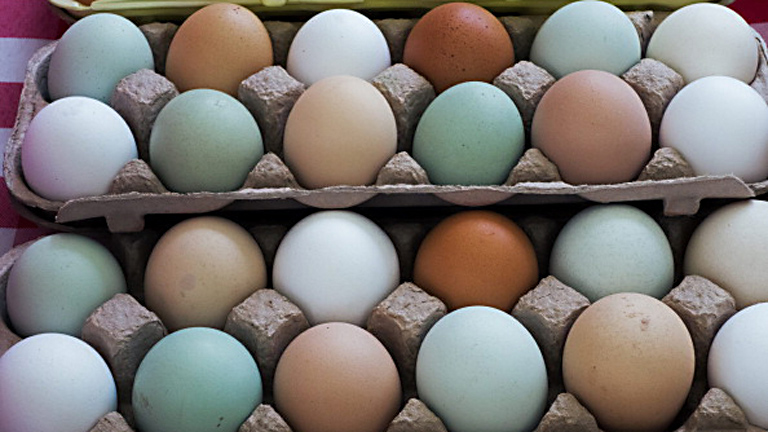 Because the San Francisco Bay Area is a world-class destination for food lovers, even the simplest ingredients can become absolute works of art. Take eggs, for example, a traditional staple in American breakfasts but also offered in many variations at local restaurants. While you can easily find some of the finest eggs dishes you've ever tasted, others take it to a much higher level in terms of taste, quality and presentation. Here are five of the best egg dishes in the Bay Area.

Just days ago, the beloved Manresa restaurant reopened, following months of rebuilding after a devastating fire temporarily closed its doors last July. Widely considered the finest culinary experience in the South Bay, the two-star Michelin restaurant changes its seasonal tasting menu about every six weeks, with farm fresh eggs always making an appearance in some fashion. One of owner-chef David Kinch's most celebrated signature dishes has been the Arpege Soft Boiled Egg with Maple Syrup. Inspired by the famous recipe created by Alain Passard, the French chef and owner of one of Paris' Michelin three-starred restaurants L'Arpege, this "hot-cold" egg dish with whipped cream and sherry vinegar served in the shell has been described as one of "the most exquisite egg dishes in the world." Other egg dishes from chef Kinch, a James Beard Award-winner, include an Old Fashioned Omelet and Baked Eggs with Chorizo.

One of the current desert offerings at the Farmhouse Inn is an incredibly delicious Cranberry Soufflé. Made with fresh cranberries, vanilla beans, blood oranges and crème anglaise, eggs are just one of the ingredients albeit an essential one for its creamy texture. Upon presenting this fluffy creation by pastry chef Phil Ogiela, a staff member will pierce the top of the sweet specialty desert with a knife, then pour cream into the opening. Coupled with an after-dinner wine, the Cranberry Soufflé is just another indication why the Farmhouse Inn Restaurant led by celebrated chef Steve Litke has been a Michelin-starred restaurant for nine consecutive years. For a more traditional approach, overnight guests can enjoy a gourmet breakfast, featuring a Farmhouse-styled eggs benedict or the delightful Egg in a Frame, prepared by breakfast chef Trevor Anderson and Farmhouse Inn owner Catherine Bartolomei.

Currently listed as a supplemental dish on the chef's tasting menu, the Royal Ossetra Caviar includes an enchanting Jidori Hen Egg Mousse, along with Persian cucumbers, garden dill and a delectable horseradish crème fraîche. As a $75 supplement, guests at Thomas Keller's French Laundry may balk at the added cost on top of the $295 prix fixe with optional wine pairing. But for other guests who want the ultimate experience at one of the world's greatest restaurants, the added creation will well be worth it. Other intricate egg creations from Keller, the only American chef with two three-star Michelin restaurants, include Truffle Egg Custards and Soft Poached Quail with Applewood-Smoked Bacon, straight from his French Laundry cookbook.

Voted the Best Restaurant in America by Open Table users in 2013, St. Francis Winery doesn't have a full service restaurant for its award-winning wine and food pairings. Instead, this extraordinary culinary experience is held in a spacious room, where guests enjoy small dishes impeccably crafted by executive chef Bryan Jones and his talented staff, and paired with hand-selected artisanal wines. The current dessert featured on the award-winning menu that changes seasonally is a decadently delicious Souffléd Chocolate Cake, with spiced candied pecans, crème fraiche, fig and port caramel, and a luscious chocolate sauce. At just $60 and $48 for wine club members, the wine and food pairings are an extraordinary bargain, given the flawless efforts put into the "small plates that rivals the kitchen of any Michelin-starred restaurant."

After several years, the Michelin Guide finally added two more San Francisco Bay Area restaurants to the coveted Michelin three-star status, a validation of "exceptional cuisine, worth a special journey." One of those newly anointed restaurants is Benu, in San Francisco's SoMa district. Led by owner-chef Corey Lee, previously the head chef of The French Laundry, Benu's tasting menu begins with the Thousand-Year-Old Quail Egg, bursting in flavor with potage and ginger. A traditional Chinese egg dish with a history that stretches back some 600 years, Lee's uniquely inventive variation prepares guests for an extravagant experience with the remaining dishes from his intriguing tasting menu. Corey Lee's new restaurant, Monsieur Benjamin, offers other egg dishes for its weekend brunch.

Related: Best New Cocktail Bars In The Bay Area
Randy Yagi is a freelance writer covering all things San Francisco. In 2012, he was awarded a Media Fellowship from Stanford University. His work can be found on Examiner.com Examiner.com.