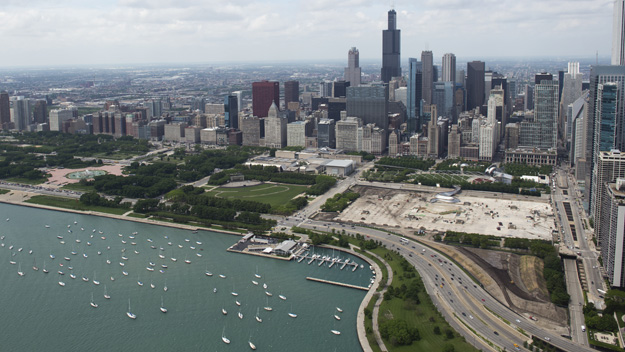 Like a lot of Americans, you probably know a lot about the great city of Chicago, like Wrigley Field is one of the oldest baseball stadiums in Major League Baseball and the Cubs haven't won a World Series in more than 100 years. You also probably know that it's often referred to as the Windy City and it's one of the largest cities in America. But you might not know the original name of Wrigley Field and you might not know that the Chicago River flows backwards. Here are 10 things you may not know about Chicago.

Chicago Has More Than 25 Nicknames

Most visitors are familiar with the term "The Windy City" and perhaps "Chi-Town," but these same visitors might not realize that Chicago has more than 25 other nicknames. Some other prominent nicknames are "City of Broad Shoulders" and "Hog Butcher for the World" (taken from Carl Sandberg's 1916 poem "Chicago"), "Second City, "City by the Lake" and "Chicagoland." The term "Second City" has been considered derogatory in that it can refer to the rebuilding of the city after the Great Chicago Fire (creation of the second city) and its status in relation to New York City. Incidentally, the Great Chicago Fire was not started by Mrs. O'Leary's cow and instead the story was fabricated by Michael Ahern, a police reporter from the Chicago Tribune, who admitted 22 years later that he made it all up.

In 1942, the world's first artificial nuclear reactor was created under the leadership of Enrico Fermi and Leó Szilárd at the University of Chicago. Dubbed the Chicago Pile-1, the experiment was held in a converted racquet court on the original Amos Alonzo Stagg Field. The 49-member science team successfully conducted the test as part of the larger Manhattan Project, credited for producing the earliest atomic bombs that led to the end of World War II.

Chicago was the host city of the first televised presidential debate in American history. On September 26, 1960, John F. Kennedy and Richard M. Nixon met at WBBM-TV, the CBS affiliate in downtown Chicago. The historic event was a major success as 70 million viewers tuned in to the first debate between Democratic Senator Kennedy of Massachusetts and Republican Vice President Richard Nixon. Three other presidential debates followed and Kennedy went on to the 1960 presidential election, barely winning the popular vote by less than a percentage point but clearly dominating the electoral vote.

Adopted in 1917, the official flag of Chicago has four red stars bounded by three horizontal bars and two blue horizontal bars. The three white stripes represent sections of the city – North, West and South – while the top blue stripe represents Lake Michigan and the north branch of the Chicago River and the bottom blue strip represents the south branch of the Chicago River and the Great Canal. The four, six-pointed red stars represent famous landmarks or events in the city's history.

New Orleans may be the "Birthplace of Jazz," but the term used for this musical style was said to have originated in Chicago. Although the origin of the word seems unsettled, this new form of music was called jazz in Chicago in 1914, derived from an earlier use of the word that described an unusual baseball pitch in Los Angeles. But jazz music has its earliest origins in New Orleans, with Ragtime traced back to 1899.

Origin of the Name Chicago

The name Chicago is generally believed to have derived from the Native American word "shikaakwa," meaning wild onion. The two indigenous groups known as the Miami and Illinois made references to the native onions because of its abundance along the banks of rivers and in forests. The earliest known reference of the term came from the memoirs of French explorer Henri Joutel, who was part of the 1684-1688 North American expedition led by Robert Cavelier, Sieur de La Salle. Joutel's journal is considered the most accurate account of the expedition and he made a number of references to the region as "Chicagou."

Celebrating its 100th anniversary earlier this year, Wrigley Field is the second oldest ballpark still in operation and the oldest in the National League. Originally named Weeghman Park, the facility was built for the Chicago Federals baseball team of the Federal League. Created as the third major baseball league, the Federal League folded in 1915 and the team was renamed the Chicago Whales. The Chicago Cubs, who were originally known as the Chicago White Stockings in 1870, played their first baseball game at the legendary ballpark in 1916 and from 1920 to 1926, the park was known as Cubs Park. It wasn't until 1927 that the stadium was called Wrigley Field, named after Cubs owner William Wrigley Jr., who led the most famous chewing gum company that bears his name.

Starting and Ending Points of Route 66

The starting and ending points of one of America's most famous highways can be found in Chicago. Although the location has changed over the years, the current starting point sign for Route 66 is located at Adams Street at Michigan Avenue, in front of the Art Institute of Chicago. Although the western terminus of the "Main Street of America" is located at the intersection of Lincoln Boulevard and Olympic Boulevard in Santa Monica, the end of Route 66 sign can be found at Jackson Boulevard and Michigan Avenue in Chicago. The actual recognized ending point is located at the corner of East Jackson Drive and Lake Shore Drive, near the shores of Lake Michigan.

Many associate New York City as the location of the world's earliest skyscrapers. But Chicago's Home Insurance Building, completed in 1884, is considered the world's first skyscraper. The historic structure stood 12 stories high with a maximum height of 180 feet, which pales in comparison to Chicago's Willis Tower, the second tallest skyscraper in America at 1,451 feet high and the nation's tallest until it was eclipsed by the One World Trade Center in lower Manhattan. Still, the city of Chicago had five skyscrapers built before New York City had one, which opened the Tower Building in 1889 and the famous Flatiron Building in 1901.

Related: Guide To Wrigley Field
Randy Yagi is a freelance writer covering all things San Francisco. In 2012, he was awarded a Media Fellowship from Stanford University. His work can be found on Examiner.com.