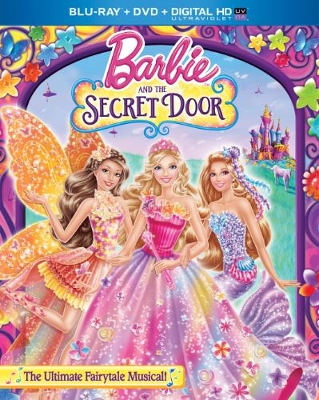 Nothing new here in this adventure for Barbie. It's a typical plot where Barbie has a problem to deal that is solved by her entering a magical world.

Although this is a children's movie, the plot is so flat I would recommend this movie for young children. Better yet, skip the movie and buy the doll. If you must, you can buy this Blu-ray on September 16th.

It's The Ultimate Fairytale Musical!™ Barbie™ stars as Alexa™, a shy princess who discovers a secret door in her kingdom and enters a whimsical land filled with magical creatures and surprises. Inside, Alexa™ meets Romy™ and Nori™, a mermaid and a fairy, who explain that a spoiled ruler named Malucia is trying to take all the magic in the land. To her surprise, Alexa™ has magical powers in this world, and her new friends are certain that only she can restore their magic. Discover what happens when Alexa™ finds the courage to stand up for what's right and learns that the power of friendship is far more precious than magic. With seven original songs and a trifecta of characters, Barbie™ and The Secret Door will be a sure-fire favorite for Barbie™ fans of all ages. The film will be available on Blu-ray™ Combo Pack including Blu-ray™, DVD, & DIGITAL  HD with UltraViolet™ on September 16, 2014, from Universal Studios Home Entertainment.

The Blu-ray™ Combo Pack includes a Blu-ray™, DVD and DIGITAL HD with Ultraviolet™.
• Blu-ray™ unleashes the power  of your HDTV and is the best way to watch movies at home, featuring 6X the picture resolution of DVD, exclusive extras and theater-quality surround sound.
• DVD offers the flexibility and convenience of playing movies in more places, both at home and away.
• DIGITAL HD with Ultraviolet™ lets fans watch movies anywhere on their favorite devices. Users can instantly stream or download.

BONUS FEATURES:
• "If I Had Magic" Music Video
• Outtakes
• "Barbie™ Life In The Dreamhouse" Episodes
• "Anything Is Possible" Music Video