FOLSOM (CBS13) — Fourth of July weekend celebrations were already underway Friday at the Nimbus Flat State Recreation Area, with families on paddle boards and picnics set up in the shade. The cost of the celebration depends on the destination and the cost of food.

As inflation goes up, the price of a holiday weekend celebration goes up, too. Travelers filled up with gas before they left the Sacramento area to avoid paying higher prices at gas stations in destinations like Tahoe and Los Angeles.

Changes to the weekend plans this year compared to last, a reoccurring story CBS13 heard from Californians who planned to stay at-home to save money.

"I can't do the things that I usually do every fourth of July, family and I will have to cut back," said Michael Hilton, a driver who filled up his vehicle Friday for $117. He said it's that price that inspired his family to keep their celebrations smaller this year.

The state's gas tax increase went into effect Friday, an annual increase to account for inflation added nearly another 3 cents per gallon. A spokesperson from AAA told CBS13 the high gas prices, a whopping $2 more than the national average, are actually down around 7 cents from a week ago. The prices at the pump haven't slowed down the demand for travel and AAA projected 5 million Californians to travel for the holiday.

"Even though things are that much more expensive, people want to travel and they are finding ways to take that much needed break," said Michelle Donati, AAA.

At the Sacramento International Airport, 125,000 travelers are expected to fly out of the airport over the Fourth of July weekend. The holiday falls on a Monday, analysts believe the busiest travel days will be Thursday, Friday and Tuesday, when travelers return post-holiday.

"I was quite shocked at the prices. I've already got a rental car. I already prepaid gas because we're down into Los Angeles and I know the prices will be really high. Everything is a lot higher here than it is in Texas," said Jana Fanning, a traveler from Austin, Texas.

The cost of the trip, Fanning said, was worth the ability to visit and spend time with family.

Once at the BBQ or Tahoe trip, the food served will cost Americans 11% more than it did last year, according to Wells Fargo's July Fourth Food Inflation Report. The report, co-authored with David Branch and Kevin Bergquist, Wells Fargo Food and Agribusiness Industry Advisors, breaks down the cost increases for some of the holiday's most popular items, like ice cream, hot dogs, and chicken wings.

Ice cream prices are up 6% and it's recommended to save money by making homemade ice cream instead of store bought. On meat staples like beef and chicken, prices are up, too. Pork, however is still a value, with retail prices up 3.1% since last year. 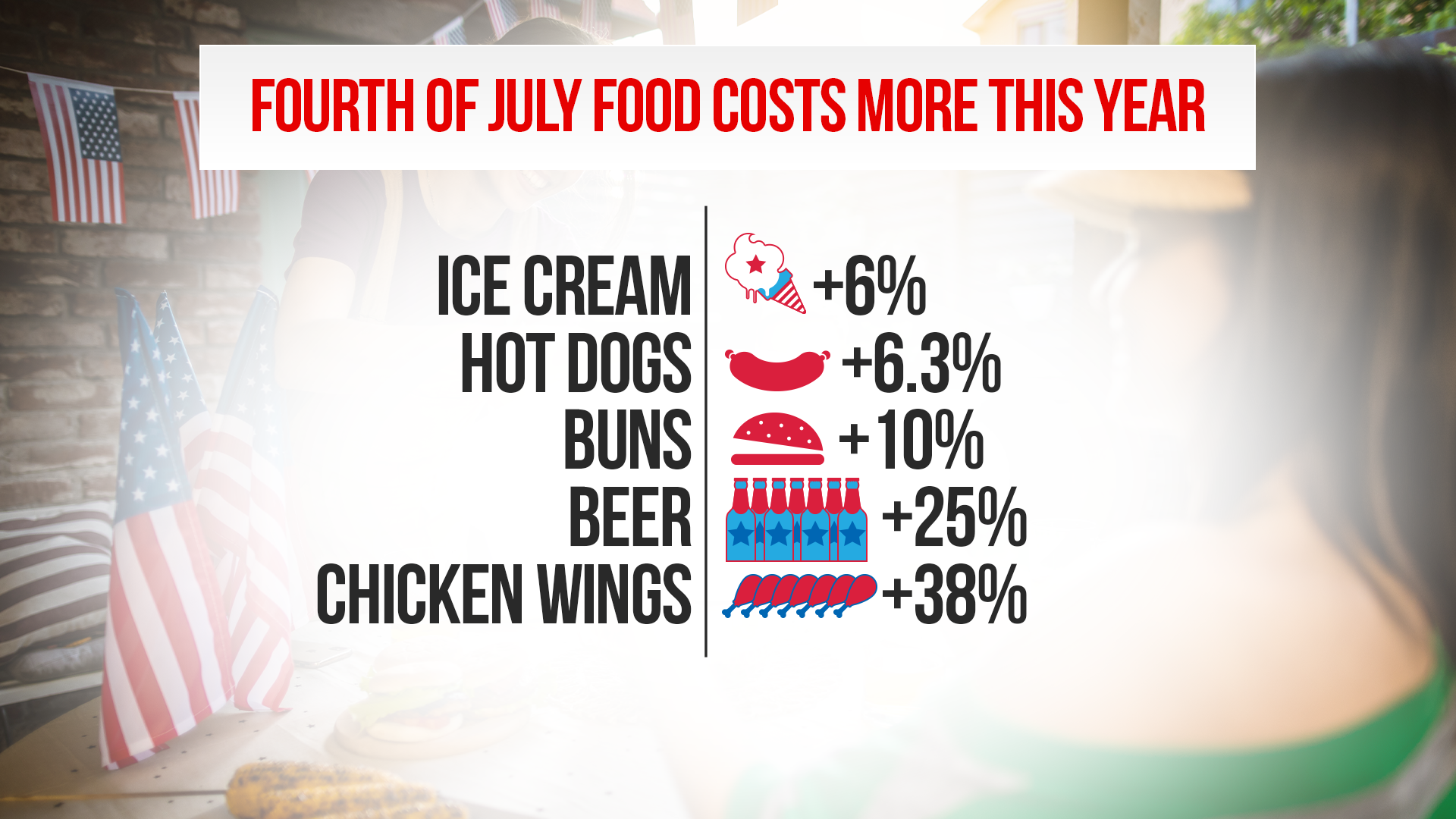 Chicken, another story, with drumsticks, breasts, and wings more than they were in 2021. Retail prices for wings and chicken breasts are up 38% and 24%, respectively. Drumsticks are up, but only by 12% volume movement, according to the report.

A shopper at an Oak Park grocery store, Rancho San Miguel Markets, told CBS13 she's made changes to more than just her grocery list to keep up with inflation.

"Not only to the menu but to my everyday life… many aspects, as a single mom you have to make adjustments," said Maria Marizo.

She explained she buys food that is on sale and doesn't go for shelf-stable snacks for her kids while they're home for the summer,  but instead, opts for fresh produce to make snacks at home.