REDDING (CBS13/AP) - The latest on the Carr Fire burning in Shasta County and into Redding:

38,000 people have been evacuated due to the Carr Fire. Here's the latest evacuation information. (Source: fire.ca.gov)

Authorities have a missing-persons hotline set up for residents who can't contact loved ones living in Redding or unincorporated Shasta County. The number is 530-225-4277. You can also visit http://safeandwell.communityos.org.

Since the hotline opened Friday, 12 reports were called in. Three people have been found.

The hotline phone center will close at 6 p.m. and reopen Saturday at 7 a.m.

As wildfires continue to burn throughout the state, Governor Brown Friday sent a letter to the President and Federal Emergency Management Agency (FEMA) requesting a Presidential Emergency Declaration for Direct Federal Assistance to further support the communities impacted by the Carr Fire in Shasta County. Full statement 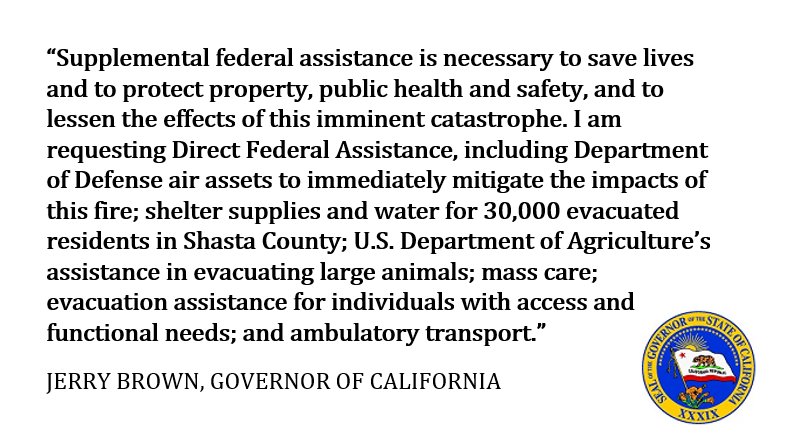 So far, 125 homes have burned, 55 structures have been damaged, and 2 firefighters have been killed in the Carr Fire. It's burned 44,450 Acres and is 3% contained.

The Redding firefighter killed by a massive blaze in Northern California has been identified as Jeremy Stoke.

The Redding firefighters union says Stoke was a fire inspector but released no other information. He was the second victim of the blaze that started Monday in Shasta County. Crews on Thursday found the body of a bulldozer operator who was hired privately to clear vegetation in the blaze's path. Officials said the fire burned over the operator as he worked to try to contain the blaze.

An official says more than 5,000 people have been evacuated and that authorities expect a destructive blaze in Northern California to continue moving into urban areas.

California Governor's Office of Emergency Services spokesman Kelly Huston says they are coordinating bringing in aircraft from the California National Guard to help fight the flames.

Officials say the extremely erratic wildfire in and around the city of Redding is growing rapidly amid scorching temperatures, low humidity and windy conditions. Temperatures are forecast to reach 110 (43 Celsius) on Friday.

Huston says officials are moving emergency supplies including cots and food to four shelters set up in Shasta County.

He says the shelters are preparing for what could be a "longer-term" event.

Several evacuation centers are open to people seeking refuge against the Carr Fire.

The following places are open, according to the Shasta County Sheriff's Office:

A couple of evacuation centers are also taking in pets and large animals:

Reports surfaced on Thursday that the bridge had been damaged in the Carr Fire.

The area around the bridge was one of the locations evacuated due to the fire.

Friday morning, authorities said the bridge had only been covered by debris and dust from the fire. No threat of fire is present in the area of the bridge at the moment.

However, the bridge will be closed on Friday as crews work to clean up the debris.

A Zamboni will be used to clean the bridge, officials say.

The Turtle Bay Museum is also closed on Friday due to the evacuations.

A City of Redding firefighter was killed in the Carr Fire, authorities say.

Exactly what led up to the firefighter's death is still being investigated by Cal Fire.

The Redding firefighter is the second person killed while battling the Carr Fire. Thursday, a private bulldozer operator was killed.

More evacuations have been ordered as a devastating wildfire torches an area in and around Redding.

The blaze that broke out Monday exploded late Thursday and raced into small communities west of Redding before entering the city limits.

Fire officials say dozens of homes have burned, though conditions make it impossible to determine an accurate count and the number could climb much higher.

A bulldozer operator on the fire lines was killed and three firefighters suffered burns. Some civilians also have been injured.

Mandatory evacuations were extended overnight to include the city of Shasta Lake, which has about 10,000 residents.

Parts of Redding, which has about 92,000 residents and is the largest city in the region, also have been evacuated.

Head to the Cal Fire website for the latest evacuation information: http://www.fire.ca.gov/current_incidents/incidentdetails/Index/2164

Cal Fire says containment numbers have gone down on the Carr Fire.

The fire has now burned 44,450 acres as of Friday morning, jumping from the around 29,000 acres it was on Thursday. Containment, which was reported at 6 percent on Thursday, is now at 3 percent.

Cal Fire has not updated the number of structures destroyed. However, many homes were seen destroyed in neighborhoods on the western edge of Redding.

A Redding TV station, located near the Sundial Bridge and the Sacramento River, was forced to evacuate during their coverage of the Carr Fire Thursday night.

Anchors with KRCR announced that the station was evacuating while on-air, then signed off.

"We are going to leave the station because it is now unsafe to be here. So like I said, we have all the information on our websites, and of course, we'll be updating you from there, just as much as we can. And we're gonna go out on the skycam for you," the anchors said.

A fire official says an explosive wildfire in Northern California has killed a bulldozer operator as he fought to contain the blaze and injured three firefighters.

Cal Fire spokesman Scott McLean says the Carr Fire in Shasta County burned over the bulldozer operator, who was hired privately, and his equipment. He says the man's body was found late Thursday.

McLean says three firefighters and an unknown number of civilians have burns but didn't know the extent.

He says the fire is "taking everything down in its path."

The blaze has burned dozens of homes in the communities of Shasta, Keswick and the west side of Redding, a city of about 92,000 people.

McLean says the situation is chaotic as Redding residents who had little warning try to evacuate.