By Brad Segall and Walt Hunter

WEST NORRITON, Pa. (CBS) -- The widow of murdered Plymouth Township police officer Brad Fox has filed a civil lawsuit against the Montgomery County store that sold the weapon that was used to kill her husband.

The gun, used to kill Fox after a traffic stop nearly two years ago, was bought by Michael Henry and then illegally given to Andrew Thomas, a convicted felon, who pulled the trigger.  It was one of six guns Henry bought at the West Norriton store over a period of just four months.

"The complaint alleges that In Site (gun store) knew or should have known that it was engaging in illegal and negligent straw purchases but chose to put profits over people," says Jonathan Lowy, director of the Legal Action Project at the Brady Center to Prevent Gun Violence. 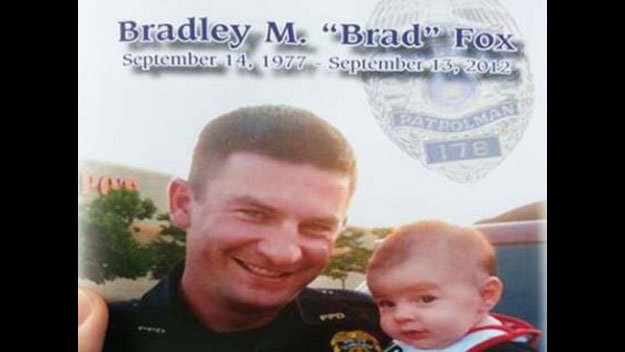 Thomas shot and killed himself after shooting Fox.  Henry was sentenced to 20 to 66 years behind bars and is appealing that sentence.

The lawsuit says the signs were there and the store should have acted more responsibly.  Henry bought six guns for cash from In Site in just 14 weeks.

The gun store, owned by a retired police officer, was never criminally charged.  Lynsay Fox says she's filing the lawsuit to prevent other families from being faced with this kind of tragedy.

Standing in front of a picture of Officer Fox, and fighting back tears, Lynsay, his widow spoke of her young daughter and being three-months pregnant with her second child, a son, when Officer Fox was murdered.

"I am bringing this case with the hope that something positive will come of this tragedy," Mrs. Fox told reporters.

"That through legal action I can help prevent other families from suffering a similar fate."

Criminal investigators determined that the gun dealer followed all federal and state guidelines in selling the weapon and did not break any laws.

However, the lawsuit alleges, he should have done more, spotting "red flags" that Henry was a "straw purchaser."

Responding to a CBS 3 inquiry, the gun dealer, pointing out he spent 20 years as a police officer before opening his business, said he and his attorney could not comment because they had not fully examined the lawsuit.

He did say, however, that he has always run a "legitimate business."

Attorneys for the Brady Center say the complaint is the first filed as part of a campaign to stop "bad apple" gun dealers, that campaign, according to a press release, "targets the five percent of gun dealers that account for nearly all of the nation's crime guns."