PHILADELPHIA (CBS/CNN) -- A spectacular display of the northern lights is possible this week, starting Wednesday, as far south as Pennsylvania and Oregon. There is a small chance the northern lights will be visible in the Philadelphia region, with the best viewing opportunity coming Thursday night.

The best chance at seeing the spectacle in our area will be north and west of the city, particularly in the Poconos. 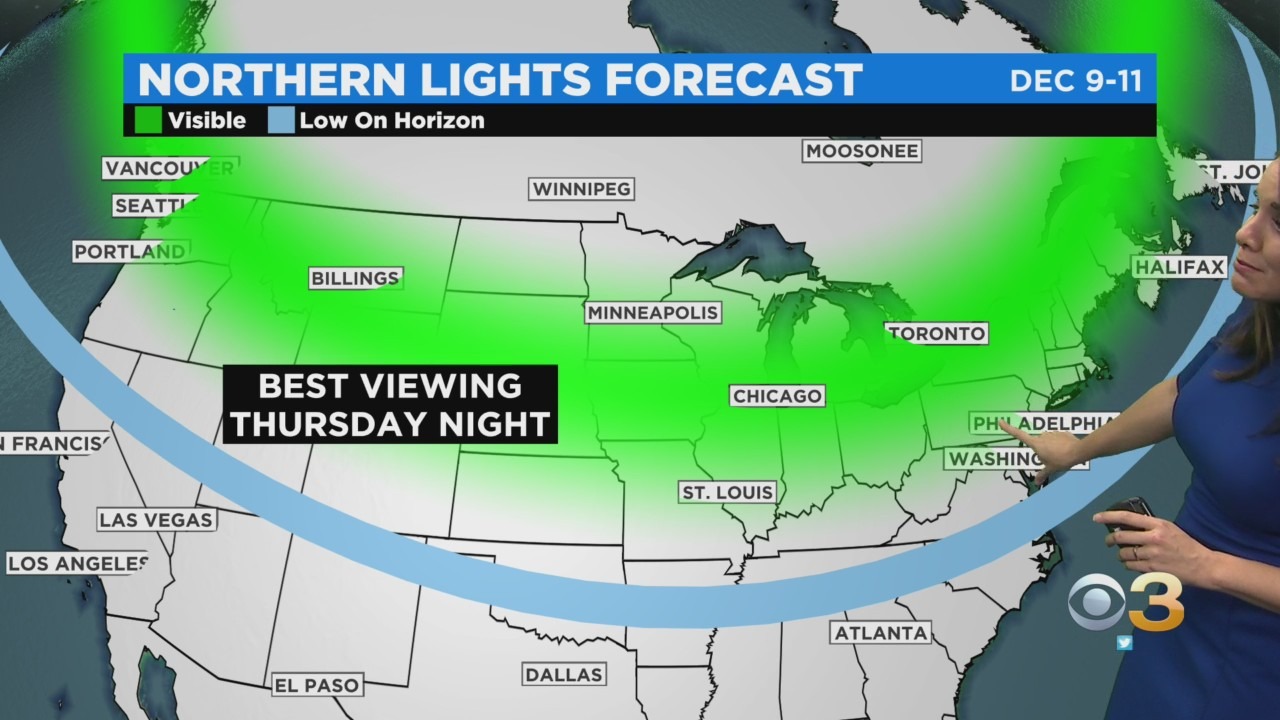 The best chance to see the aurora borealis will be under the cover of darkness and away from light pollution.

The sun just released the equivalent of a massive solar belch, sending highly charged coronal matter across the solar system. Some of the sun's energy will reach our atmosphere Wednesday night and Thursday, motivating stargazers to look toward the night sky in anticipation of the colorful, shimmering northern lights.

After several months of hiatus, the sun has awoken into a new period of solar activity. An impressive solar flare and Coronal Mass Ejection (CME) Dec. 7 hurled plasma and magnetic field toward earth.

If your favorite radio station crackles with static or your GPS strays by a few yards, it's not just another byproduct of a crazy year. The incoming solar weather can actually cause communication disruptions such as GPS positioning errors and interference within our power grid. NOAA's Space Weather Prediction Center says that the potential exists for strong storm levels "if the magnetic field carried with the CME connects well with Earth's magnetosphere."

Of course, a pleasant effect of the incoming solar activity will be a dazzling display of the aurora borealis. Because of the strength of the storm, the northern lights might be visible to many who usually don't get to see them. NOAA's Geomagnetic Storm Index, which indicates the magnitude of the solar activity, is predicting a Kp Index of 7 (out of 9), which corresponds to aurora activity as far south as Chicago, Detroit, Boston and Seattle.

The incoming solar particles and magnetic fields released from the sun during a CME force the release of particles already trapped in the earth's atmosphere. This triggers reactions forcing photons of light activated by oxygen and nitrogen molecules in the upper atmosphere.

The most common aurora colors are a luminescent green, but if we're in for a bit of luck, the atmosphere could provide a range of colors from red to pink or blue to purple. Even though the forecast peak of the northern lights is for three hours starting at 10 p.m. Wednesday, some activity will be possible through December 10.

Keep in mind, this is not the only stunning celestial event to take place this month. Mark your calendars for December 21, when Jupiter and Saturn make their closest visible approach since the Middle Ages. This great alignment of planets, known as a conjunction, coincides with the winter solstice and won't be seen again until 2080.