PHILADELPHIA (CBS) -- Tropical Storm Isaias has brought on water rescues, home rescues and with the Schukyll River expected to exceed flood stage by Tuesday night, the Philadelphia Fire Department says the worst may not be over just yet.

"I want to make sure everyone understands the storm is not over," Fire Commissioner Adam Thiel said.

Thiel is warning Philadelphia residents that although the rain may have stopped by mid-afternoon, the threat of the storm that lashed the region throughout the morning isn't over just yet.

"The bulk of the rain has ended, however, we're still going to have significant wind gusts for the next few hours and the flooding has just begun," Thiel said.

During the onset of the storm, you could see downed trees and torrential downpours throughout the city.

The Office of Emergency Management was activated at 8 a.m. as flooding began to make driving nearly impossible on certain roads and created dangerous conditions even for some homeowners.

"We've had submerged vehicles. We're rescuing people from houses right now along Darby Creek," Thiel said. "Cobbs Creek is completely flooded. The Wissahickon is out of its banks. We need everybody's help to not get into situations where we have to put folks in harm's way and make rescues."

Dramatic water rescues were made along the Darby Creek Tuesday afternoon as the notorious waterway busted its banks and caused devastating flooding from Philadelphia to Delaware County.

Many were forced to flee their homes and into emergency shelters.

The scope of submergence in Southwest Philadelphia was prolific.

Chopper 3 was over 80th Street and Lindbergh Boulevard in the city's Eastwick section, where the entire residential area was inundated with the waters of the Darby Creek. 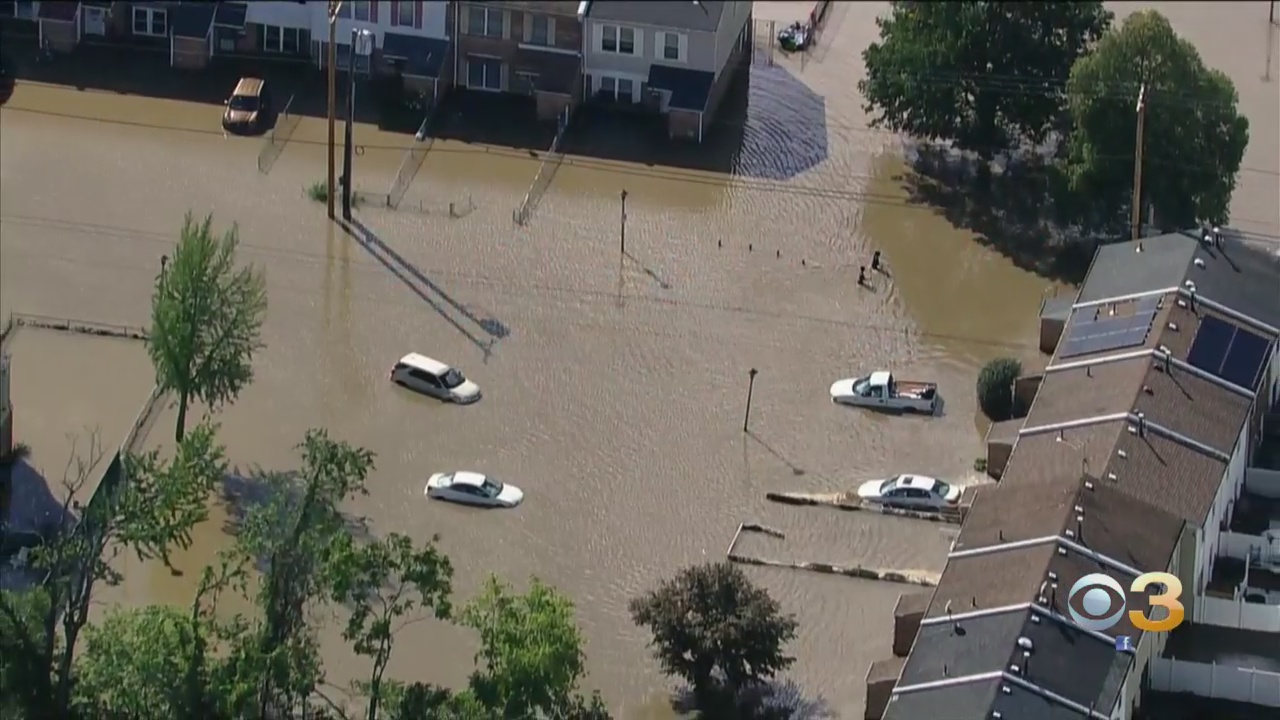 "The reality is, this was a tropical storm and a very severe storm," Thiel said.

The Philadelphia Fire Department, along with the National Guard, was on scene helping those suddenly trapped in their homes and vehicles.

"You can see us making rescues, bringing people out. So far, nobody has needed any emergency medical care," Thiel said.

As waters in Southwest Philadelphia receded, one woman who had packed up her five horses to escape rising waters returned.

But emergency responders are reminding residents that "this is not something that is going to go away very quickly," Thiel said.

With the mighty Schuylkill River not expected to peak until 2 a.m., the potential for a ripple effect remains, meaning the region is not out of the water yet.

Fire officials tell Eyewitness News they had about 180 fire-related incidents Tuesday morning. That's five times what they normally do by that time on any given day.

CBS3's Natasha Brown and Alexandria Hoff contributed to this report.