PHILADELPHIA (CBS/AP) — More than 20 local businesses and residents have filed suit in state court in Pennsylvania seeking to overturn Philadelphia's renewed indoor mask mandate scheduled to be enforced beginning Monday in an effort to halt a surge in COVID-19 infections.

The lawsuit, filed in Commonwealth Court on Saturday, said Philadelphia lacks the authority to impose such a mandate.

Last week, Philadelphia became the first major U.S. city to reinstate its indoor mask mandate after reporting a sharp increase in coronavirus infections, with the city's top health official saying she wanted to forestall a potential new wave driven by an omicron subvariant. Businesses that require vaccines will be exempt from requiring masks.

Attorney Thomas W. King III, who was among those involved in last year's successful challenge to the statewide mask mandate in schools, said the city's emergency order went against recommendations of the federal Centers for Disease Control and Prevention and "imposed a renegade standard unfound anywhere else in the world."

"Philadelphia actually did away with the CDC guidelines as the standard and they've invented their own guidelines," King III told Eyewitness News. "They're making this stuff up. I want to see the state commonwealth court strike down this mandate as a violation of Pennsylvania law."

The suit accuses city health officials of having "usurped the power and authority" of state lawmakers, the state department of health and the state advisory health board.

"We have people here who have saved all their lives to run restaurants, open gyms, chiropractic services and other businesses in Philadelphia," King III said. "What they're telling me is that when these mask mandates are in place and people have to wear masks indoors, that they lose a substantial amount of their business."

Many businesses spent the holiday weekend getting ready for the change. A Spring Garden gym posted a sign requiring that all customers need to be vaccinated,  and at the bottom they wrote: "We know…. Please don't shoot the messenger." 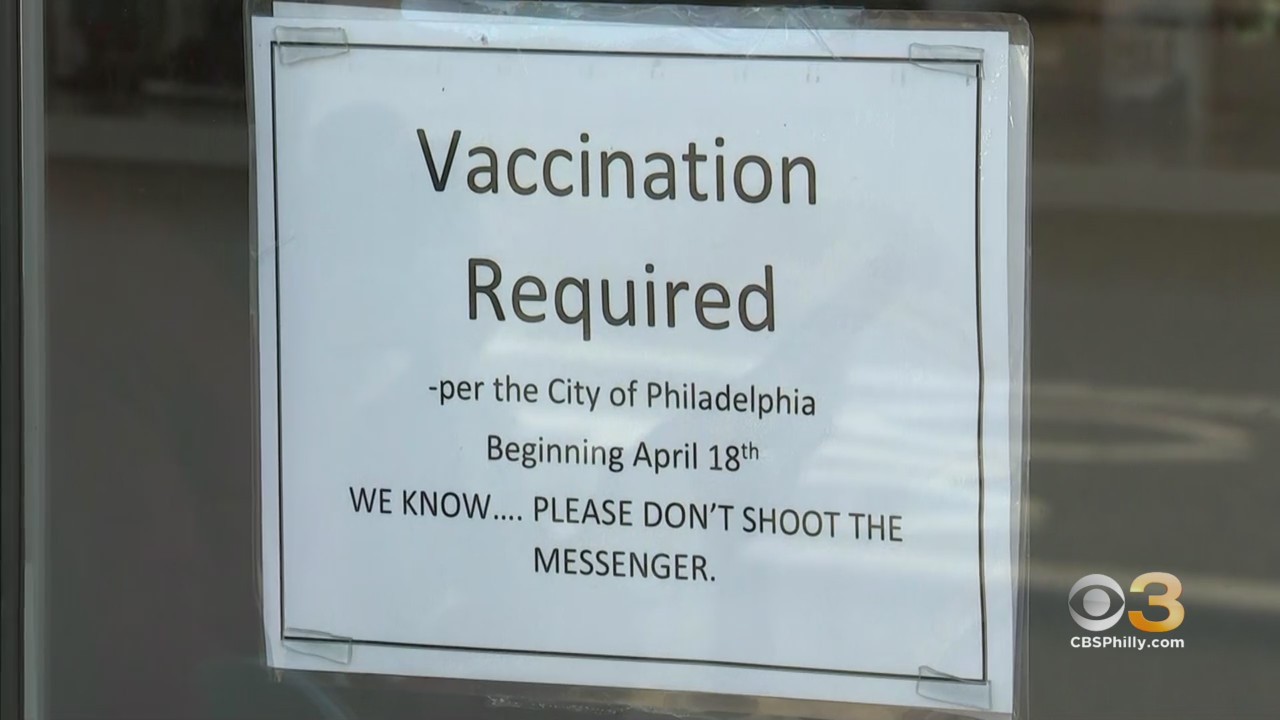 Kevin Lessard, communications director of the Philadelphia mayor's office, said officials were "unable to comment on this particular case" but cited a court's denial of an emergency motion by another plaintiff for a preliminary injunction against the mandate. Lessard said "the courts once again confirmed that city has both the legal authority and requisite flexibility to enact the precautionary measures necessary to control the spread of COVID-19."

Most states and cities dropped their masking requirements in February and early March following new guidelines from the CDC that put less focus on case counts and more on hospital capacity and said most Americans could safely take off their masks.

Philadelphia had ended its indoor mask mandate March 2. But last week, Dr. Cheryl Bettigole, the health commissioner, cited a more than 50% rise in confirmed COVID-19 cases in 10 days, the threshold at which the city's guidelines call for people to wear masks indoors.

As of Monday, the city is moving to a Level 2 mask precaution, meaning masks are required indoors at public places like businesses, schools, and daycares. Health officials say Philadelphia is averaging about 142 cases per day.

The city says they are hoping to get ahead of a potential surge in positive cases driven by an omicron subvariant.

"If we fail to act now, knowing that every previous wave of infections has been followed by a wave of hospitalizations, and then a wave of deaths, it will be too late for many of our residents," Bettigole said. Health inspectors will begin enforcing the mask mandate at city businesses on Monday.

Meanwhile, King III says this mandate is a step in the wrong direction and businesses in Philadelphia will take a hit.

"If you walk across the street to Bucks or Delaware County, these regulations don't apply," King III said. "You don't have to wear a mask in indoor gatherings. Philadelphia is the outlier within the state."

The restaurant industry pushed back against the renewed mandate, saying workers will bear the brunt of customer anger over the new rules.

The state Supreme Court in December ruled that the governor's administration had no legal authority to require masks in Pennsylvania's schools and child care centers, citing state lawmakers' elimination of an emergency disaster declaration. The 6-0 ruling said state law gives health officials broad authority to protect public health but doesn't permit the department "to act by whim or fiat in all matters concerning disease."