PHILADELPHIA (CBS) - The struggle continues for many businesses in the Delaware Valley due to pandemic-related issues. But for one caf in Philadelphia, failure is not an option. This Brewerytown café is a unique operation dedicated to helping a group of people who are often overlooked and underestimated.

K'von Harris-Robinson is a skilled barista. It seems there isn't a drink he can't create. 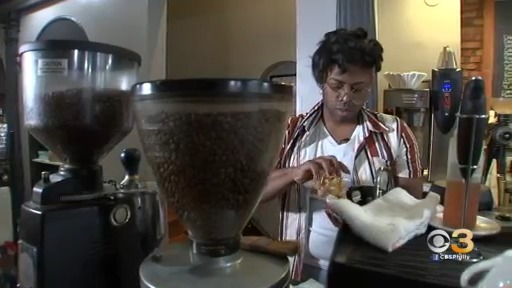 But he does much more than brew your favorite cup of Joe these days.

"Literally like started from the bottom, all the way up," he said.

He's now the general manager of "The Monkey & the Elephant" in Brewerytown, a non-profit café dedicated to employing young adults who are aging out of the foster care system.

Harris-Robinson is a former foster kid himself.

"We really become that support system for people who don't have it," Harris-Robinson said.

"They're almost the unseen, the forgotten, the left behind frankly," executive director Anne Harrison said.

Over the past seven years, The Monkey & the Elephant has helped dozens of young adults between the ages of 18 and 23. They get a part-time job at the café and weekly development workshops.

"The young people who come to us have a chance to earn money and learn about the professional world and really get their feet under them," Harrison said.

But the pandemic put the mission in jeopardy, shutting the doors here for three months in 2020.

"That first year there were the PPP loans, there was a lot of city, state and federal support, and that really helped us get through the first year," Harrison said.

Omicron once again forced the café to stop indoor dining in December. That just reopened last month, along with outdoor dining.

Layoffs are never an option.

"Our participants know that they're going to get a set wage, a living wage, a minimum number of hours so they can support themselves because they really are on their own," Harrison said. "All those things you know you were leaning on your parents or community for, they aren't there."

So, to make up for a decrease in foot traffic, the café is now selling merchandise online and offering take-home goodies. Everything from their coffee to cocoa. Plus, dry mixes to make your favorite bakery item at home as well.

And the café's menu is always changing. Not only is it seasonal, but everything is also made from scratch.

"This is like my favorite season because we have the lemon loaves and lemonade," Harris-Robinson said.

Harris-Robinson is whipping up something new, too.

He's creating a leadership program that prepares the next generation to land full-time jobs when their time here is complete.

"Came from all different walks of life, came with different baggage and struggles, and to be able to unpack that and help people grow is amazing," he said.

The Monkey & the Elephant is hoping to expand the program next year. There's always more applicants than positions. You can donate or make a purchase online that goes directly to the program. For more information, click here.