PHILADELPHIA (CBS) – A New Jersey high school student undergoing treatment at Children's Hospital of Philadelphia who was hoping to take a pop star to his senior prom wasn't able to land his dream date, but did land a dream invite.

Eighteen-year-old Kevin McGuire is a senior year at Sterling High School. McGuire was concerned his cancer treatment and loss of hair would prevent him from landing a date to the prom.

After talking it over with his sister, he decided he'd reach for the stars, literally, and ask Berks County native Taylor Swift to go with him.

Kevin's sister, Victoria, created a Facebook page for Kevin to help get the word out about his prom date idea.

The page, "Taylor Swift Please Take Kevin McGuire To Prom," became an overnight sensation and in no time, Kevin had tens of thousands of supporters.

Friday, Taylor responded to Kevin's request on her Facebook page and said, "Kevin, I'm so sorry but I won't be able to make it to your prom. But I was wondering, the ACM Awards are coming up.. Would you be my date? Love, Taylor".

Eyewitness News was with Kevin when he read the post, which was greeted by loud cheers and clapping.

"I don't know what else to say," said an ecstatic Kevin. "I was just trying not to throw up." 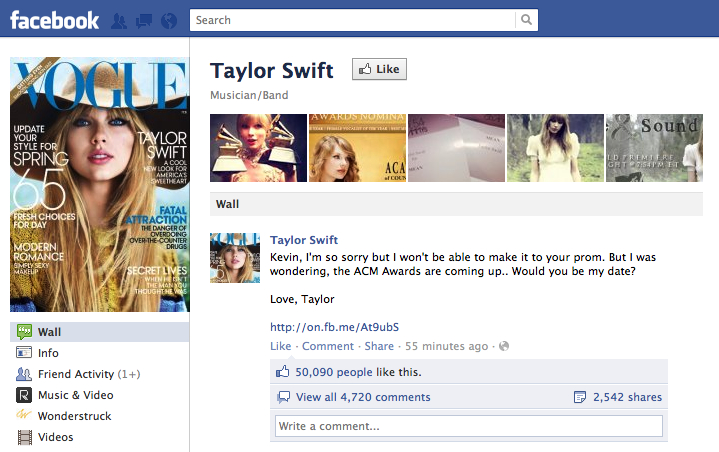 Although Taylor can't make it to his June 1st prom, which also happens to be his birthday, it looks like the April 1st Academy of Country Music Awards just might make his let down totally worth it.

Now, the question is, will Kevin go to the ACM's in Las Vegas?

In a response on Twitter sent to @CBSPhilly and @TaylorSwift13 it sounds like Kevin is going to say yes, as long as he is healthy enough to leave Children's Hospital.

"I have cancer. Cancer doesn't have me." McGuire said. "Taylor, I would love to go with you."

The 2012 Academy of Country Music Awards will be held in Las Vegas on April 1st and airs on CBS.