PHILADELPHIA (CBS) - About 100 people rallied outside Philadelphia City Hall Tuesday afternoon, becoming "superheroes for a day" in the fight against hepatitis B.

A horn sounded, signaling the crowd to strip off their outer shirts and expose the blue t-shirts underneath, each festooned with a red-and-yellow "B" similar to Superman's "S" logo. 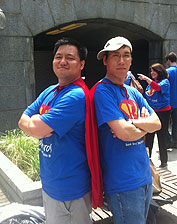 Many students from Drexel's school of public health -- some wearing complementary red capes -- were chanting "Be a hero!"

It's an effort to encourage the public to get tested and vaccinated against hepatitis B.

"We can immunize people so that they will never get it," Philadelphia heath commissioner Dr. Donald Schwarz told KYW Newsradio at the rally.

"There are folks who are particularly at high risk," Dr. Schwarz added, "both those people who are sexually active -- and especially those without protection -- as well as health workers and dialysis patients and others who are exposed to blood."

One in 20 Americans is infected with hepatitis B, which is the leading cause of liver cancer.

For more information go to www.hepbfreephiladelphia.org.