A model, actress, writer, TV host, cook book author and mother, Padma Lakshmi has a very busy schedule these days. She recently teamed up with HUGGIES to promote a new slip-on diaper during an event in New York City.

Meanwhile, Top Chef debuts November 2 on Bravo, and Lakshmi says the new season of the hit reality TV competition has a lot of surprises. The 41-year-old dished about being a being a mom, her fertility struggles, her cook books and what it's really like working on Top Chef.

You've teamed up with HUGGIES for their Little Movers Slip-On Diapers launch. How is it going?

HUGGIES sent me the Little Movers Slip-On Diapers, and I just thought all diapers were created equal. But they're really not, and if you're like me and you're always on the go, they are a real time saver, especially if your baby's kind of squirmy or wiggles a lot--they're really easy. The great thing about them is that they come with these Velcro strips on the side, so they work like a traditional diaper. They're just as absorbent, but because they have that Velcro they start out kind of like underwear, so you can just slip them on so you can change your baby in a number of positions, lying down or standing up.

You now have a daughter, and you have called her your 'miracle baby' because you were diagnosed with endometriosis. How important was it to you to share your story?

I think it was important, because I think a lot of times as women, we don't want to discuss things that have to do with our sexuality or our reproductive system for obvious reasons. It's something that affects 10 million women in this country alone, and it's one of the leading causes of infertility, and I feel so blessed and so lucky to actually be a mom and be sitting here today. I just wanted to make sure that other young women knew about this before it was too late, because it does affect your fertility, and a lot of us aren't having babies until we're in our late 30s or early 40s, and so it's very important.

As a result you started a foundation. What is your goal?

I am one of the co-founders of the Endometriosis Foundation of America, and we're just trying to spread the word to young women and girls that pain is your body's way of telling you something is wrong, and there is help. There's no cure for endometriosis, but it's totally treatable, and if you catch it early, it often involves an outpatient procedure, a laparoscopy, and in your mom's generation, there was really not the technology to do anything about it--they would just give you a hysterectomy if it got really bad. And now there's lots of things you can do, but the biggest thing we like to do is inform young girls that you have to be proactive about your health, and you have to make sure that you tell your doctor what you need—not have other people tell you what you're supposed to be okay with bearing. And it's been really the most rewarding work I've ever done. 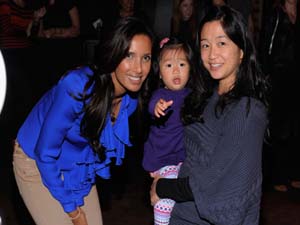 When did you start the foundation?

We started the foundation in April of 2009, and I was really nervous about speaking publicly about it, and then several months later I--very surprisingly--became pregnant, so I really think it's God's way of telling me I was doing the right thing, and in a way, it was the karma that came back to me.

Top Chef debuts on November 2, and what can fans expect to see on Season 9?

Well, we're in Texas, which is really fun. And Texas is such a big state, so we travel. We move four times during the course of the season--which keeps everyone on their toes, especially me and my team, because my daughter's with me on set. So talk about being on the go! It's quite a challenge when you have to move all of your stuff and all of your baby's stuff, and any mother or any parent--any dad too--will tell you what it's like traveling with a baby!
Do you think that moving the participating chefs around this season has been more difficult for them?

What is it like working with head judge and Chef Tom Colicchio?

You have two cook books out, Easy Exotic and Tangy, Tart, Hot & Sweet. What's the reaction from fans?

It's been really wonderful. My food career really started because of that first book, Easy Exotic. It was just a really elevated hobby of mine, and because of that book, I went on a very modest book tour. And it was out of that book tour that I began my career in TV and food. I had a career in TV in Italy, but in America I really had none, so it kind of mushroomed and blossomed into the major work of my life at this point. But I love going on book tours, I love meeting people who have the book and listening to them, and it's also very helpful for me to know what they're interested in and which recipes resonate with them. One of the great things about doing Top Chef is that I get to talk shop with all the other people in my industry. I don't own a restaurant; I'm not a chef, I'm a home cook, and I'm a food writer, and much of that is done in the privacy of my own home--in my kitchen, in a room alone at my desk, so it's really nice to be able to connect with other people.

You've been credited as one of the first internationally successful Indian models. Are there any projects you're currently working on in the modeling industry?

Well, I just did a campaign for Danskin, and one of the reasons I did that is because they made a really big contribution to my charity, and they're committed to women's health. And that was really fun, because there were other really beautiful women of all ages associated with that. Work-out wear when you're just turning 40—it's different than modeling lingerie at 22!