PHILADELPHIA (CBS) – If you don't laugh, you'll probably cry. If you don't cry, you'll likely lock yourself inside your house and not come out for a while. The way people discuss sports, and sports figures on social media is out of control, and I'm not sure any of us know what to do about it.

Public figures are subject to different rules than the rest of the population. This is not new news. Public criticism and attention is part of the deal.

Something tells me that this shouldn't be part of the deal:

That is a comment from my Facebook page, reacting to a status update that had nothing to do with Andy Reid, rather a joke scenario in which the Eagles only options at quarterback were Tim Tebow and Marcus Vick.

When I questioned about his choice of words regarding his wish of Andy Reid's death (and called him a maniac, we get this (both from the same person):

[Name removed] - I never said I was normal. Go shove a yamaka up your Heilbron ass.

[Name removed] - Andy Reid is a f**k...stop covering up for him. If he wasn't so busy shoving big macs in his fat gullet maybe he would have drafted better played and actually won something.

Take note that noting that Andy Reid's requested death is an extreme position is in some form covering up for him.

His comment about a "yamaka" and "Heilbron," I'd assume is a dig against his perception of me being Jewish and living in an affluent Delaware County housing development. I think I've worn a yarmulke four or five times (funerals and weddings) and have never lived in Heilbron, but that's sort of beside the point.

When Domonic Brown posted a photo of himself a Cowboys jersey, he received, understandably, many unhappy responses. 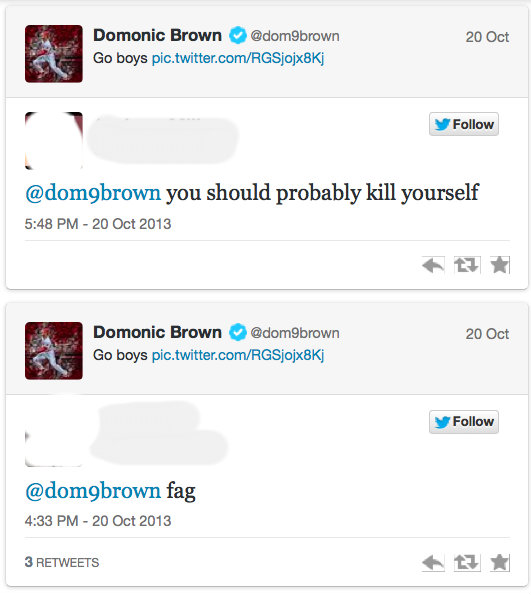 Not terribly surprising, for sure, but a request for suicide and a gay slur are out of line. 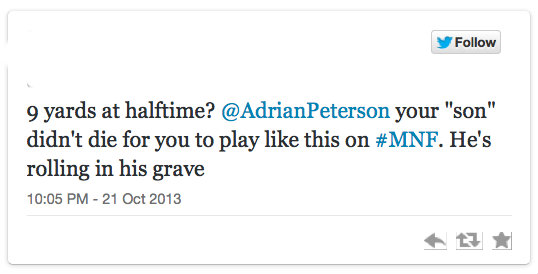 It's not that I'm telling you anything you don't know, but that's the problem. All of us know it's happening, and none of us know what to do with it. This is not a case of a child not understanding the consequences and meaning of his words. This is not a six year-old who was sent to his room and yells something regrettable to his parents. This is grown ups to strangers.

It's Twitter, Facebook, Instagram and comment sections. It's any place where people can spew hate without being faced with another face to say it to. If you ever wonder why athletes can get testy on Twitter, go search their mentions after a less than stellar game.

I've been told my skin is not thick enough for the industry I'm in. I disagree. I'm not new to this. I've been in radio half of my life, and as you can imagine, had it in my family much longer than that. I'd hate to ever have skin so thick that death wishes, racism and hatred roll off my back as if nothing has happened. If that sort of stuff can go in one ear and out the other, think of the good things that could do the same. There is a difference between the sort of thick skin that can deal with a stern disagreement about a quarterback controversy, and "you should die because the Eagles aren't good."

This is sports in Philadelphia. I understand we're all very passionate, but this is a leisure activity. This is supposed to be fun. I just think we should be able to argue passionately, constantly, without telling each other to "go die."

This is not everyone. This is the minority. But it's a growing minority that is not insignificant.

90% of people handle their online selves with a sense of decorum. The 10% have lost control. What are we going to do about it?