PHILADELPHIA (CBS) -- The Sixers have announced plans to possibly build a brand new arena in the heart of Center City on Thursday. Sixers' ownership posted a picture of the potential arena on their website: 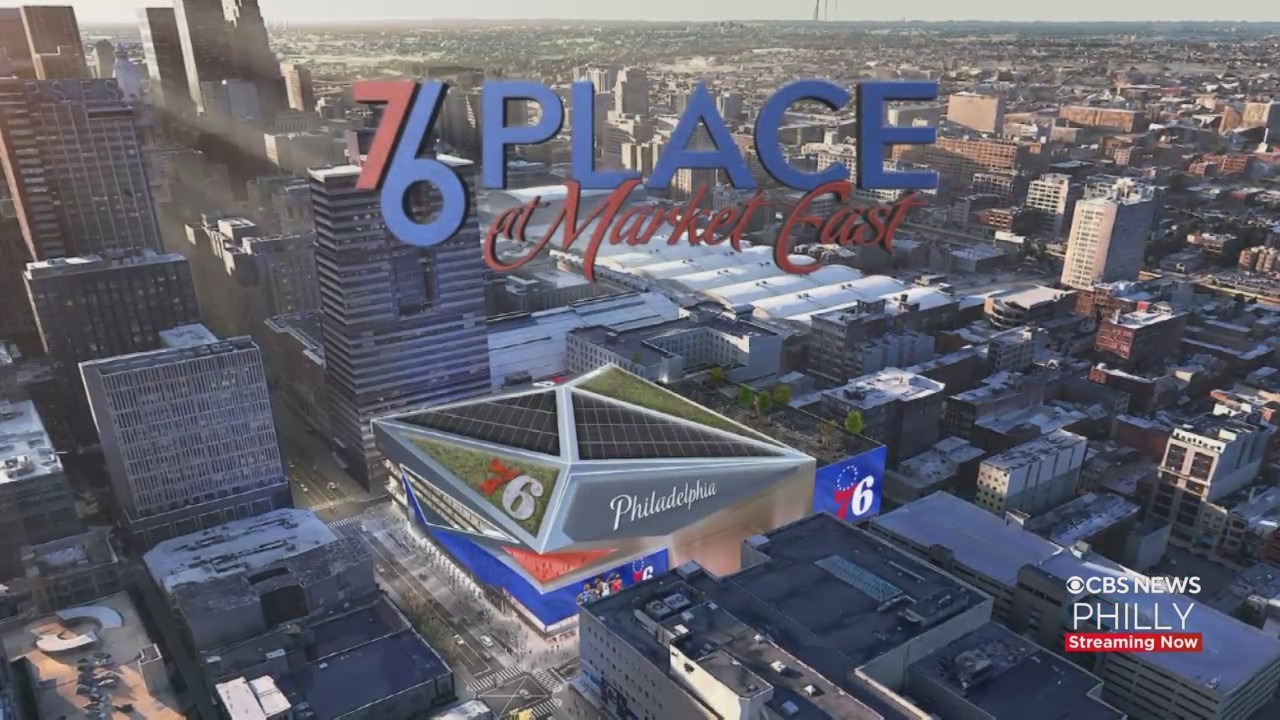 "What a great day for Philadelphia to announce a $1.3 billion privately funded arena in the heart of the city, coming out of the pandemic and kind of revitalizing downtown and giving it a shot in the arm at a transit-oriented stop right there, couldn't be better,"  said David Adelman, who's a chairman and investor in the new arena.

It's important to point out, that there is nothing final. This is just a proposal from the team.

They say they want to put the "privately funded" arena in the Fashion District, where the old Gallery Mall was located, on Market Street from 10th to 11th Streets. The arena is anticipated to cost roughly $1.3 billion. According to a release, the arena would provide $1.9 billion in overall economic output during construction and $400 million annually upon opening to support Philadelphia's long-term economic growth and sustainability.

It's no secret that Harris-Blitzer Entertainment, which owns the Sixers and several other professional sports teams, wants its own arena. The Sixers had plans to build one at Penn's Landing, but the city nixed that idea.

Sixers owners, Josh Harris and David Blitzer, announced the creation of a development company called "76 Devcorp" responsible for developing the future home of the team. The company will be led by Adelman, according to a release.

"The Philadelphia 76ers are a storied Philadelphia institution with a proven track record of investing in their community. That's why we're committed to building a world-class home in the heart of the City and creating a privately-funded arena that strengthens ties within the local community through investments that prioritize equity, inclusivity and accessibility," Harris said in a release. "David Adelman shares our vision for ensuring that the new arena is an anchoring force in the local community, creating well-paying jobs and economic opportunities for those who need them most."

The city released a statement to the news of the Sixers' proposal:

We share the 76ers commitment to finding a long-term home in Philadelphia and look forward to working closely with them to make sure the development maximizes benefit to the City and its residents in an equitable and sustainable manner. It was exciting to hear the proposal for Fashion District Philadelphia as we believe it is an ideal site for a world class sports and entertainment arena. FDP offers our community a transit-rich location and an incredible opportunity to revitalize Center City, ensuring its vibrancy for generations to come. We're looking forward to the development corporation, led by native Philadelphian David Adelman, leading a thoughtful engagement process, in collaboration with the community, that results in the best proposal – one that our entire City can get behind.

According to a release, 76 Devcorp evaluated numerous potential sites before determining the Fashion District as its preferred location. They say they selected the site due to it being the most transit-rich location in all of Philadelphia, the ability to redevelop commercial an existing commercial space, and the opportunity to play a role in the continued revitalization of Center City.

Ground-breaking for the project is not expected for several years, according to a release. If the proposal were to go through, the Sixers say the development will be completed in time for the 2031-32 NBA season.

The Sixers lease the Wells Fargo Center, where they have played since it opened in 1996. The lease at The Center ends in 2031.

The Wells Fargo Center is undergoing a $300 million renovation in hopes of keeping the Sixers.

A Wells Fargo Center official released a statement in regards to the proposal from the Sixers:

We've had a terrific partnership with the Sixers for decades and look forward to hosting the team in this world-class facility until at least 2031," the official said in the statement. "We've invested hundreds of millions alongside the City, Phillies, and Eagles to make the South Philadelphia Stadium District an incredible destination for sports, entertainment and our passionate fans.  We think it rivals any in the nation and will continue to draw the best events -- the 2026 FIFA World Cup is a perfect example.

The owners of the Fashion District Philadelphia also released a statement:

At Macerich, we are constantly enhancing our properties to bring greater value to our shareholders, retailers and communities. The decision to repurpose part of Fashion District Philadelphia to include the new 76ers arena is a natural evolution of the site and a unique and once-in-a-lifetime opportunity for our company. We are committed to working collaboratively with 76 Devcorp to bring to life the vision of this iconic development that will ensure Philadelphia's vibrancy for generations to come.

The President of The Chinese Restaurant Association, Steven Zhu, says that sports arenas do not contribute to the neighborhoods they are in.

"What has the NBA arena in Washington D.C.'s Chinatown done? It has reduced Chinatown from a residential neighborhood of thousands to a few restaurants, signs on the Starbucks in Chinese, and the Chinatown gate. We know that these big sports arenas do not contribute to the neighborhoods that they are in; they serve only their own needs and their own profits," Zhu said.

CBS3's Ross DiMattei and Howard Monroe contributed to this report.