CHESTER, Pa. (CBS) -- A retired Chester firefighter was arrested by the FBI for allegedly hurling a fire extinguisher at police inside the U.S. Capitol during the Jan. 6 attack. Robert Sanford, 55, from Upper Chichester, was arrested early Thursday morning and was formally charged via a virtual federal hearing.

Federal authorities used video from the riots to identify Sanford, who was seen wearing a Chester Fire Department hat. They say he is pictured holding a fire extinguisher that he's accused of hitting Capitol police officers with during the rioting. 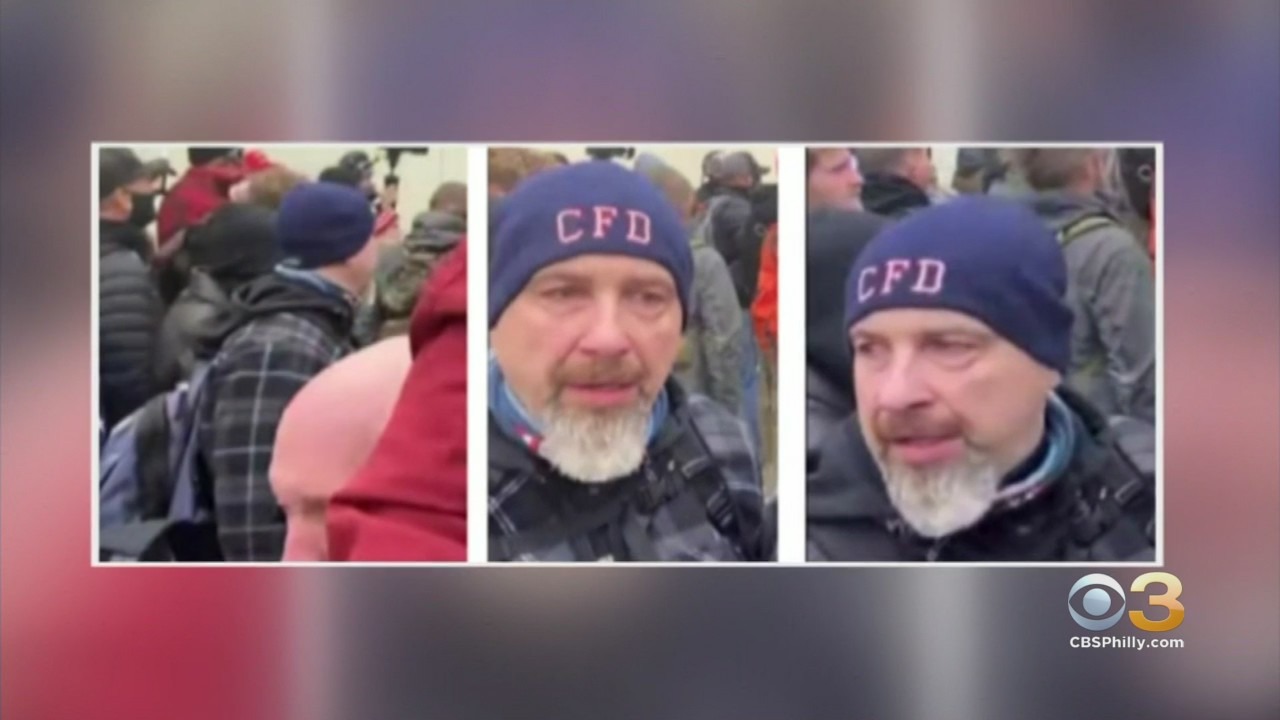 Court documents allege that he traveled to Washington, D.C. with a group to attend President Donald Trump's rally and made his way to the Capitol during the insurrection.

"This morning, Robert Sanford, 55, of Upper Chichester, Delaware County, surrendered to federal agents on several charges, the most serious of which is assault on a federal charge," FBI Special Agent in Charge Michael Driscoll said. "Both men are being prosecuted by the U.S. Attorney's Office in the District of Columbia. We've conducted extensive work over the past few days around the clock, not sparing any resources."

Sanford has been charged with knowingly entering or remaining in any restricted building or grounds, disorderly, disruptive conduct on Capitol grounds, civil disorder, assaulting, resisting or impeding officers while engaged in the performance of official duties.

Sanford's attorney described his client as a family man who's never been in trouble with the law.

Though Sanford's attorney says the retired Chester firefighter of 26 years wasn't involved in any right-wing extremist groups, prosecutors say a Proud Boys shirt was found in his home.

Eyewitness News stopped by Sanford's home in Chichester but our knocks went unanswered. His neighbors who were home declined to comment.

"City officials are aware that a former Chester Firefighter allegedly attended and participated in the insurrection that took place in our nation's capital last week. While Robert Sanford adorned a hat with a Fire Department logo, he is not a current employee of the city of Chester. Mr. Sanford was a member of the Chester Fire Department from January 1994 until his retirement in February 2020. As the First Amendment of our Constitution outlines the right to free speech and to peaceful assembly, the actions of the rioters in D.C. last week hinged on characteristics of domestic terrorism. As such, if any person, be it current or former employee or resident, is confirmed to have participated in last week's event at the Capitol, then we hope our legal system will work according to its purpose and bring them to justice. On behalf of the city of Chester, I offer my deepest, most heartfelt condolences to the family and friends who lost a loved one as a result of the events that transpired on that day."

Within seven days, Sanford will be transferred to Washington, D.C., where he'll receive his court date.

His lawyer says he will request that his client be released even though that request was denied in the commonwealth.

Earlier this week, Philadelphia police opened their own internal affairs case into one of their officers after she allegedly attended the Trump rally that preceded the riots at the U.S. Capitol.

A Pennsylvania man, 50-year-old Benjamin Philips of Ringtown, Pennsylvania, died from a medical emergency and was among four others who died during the violent mob.

More than a dozen people from the Philadelphia area were arrested in the aftermath of the U.S. Capitol breach.

CBS3's Natasha Brown and Kimberly Davis contributed to this report.