PHILADELPHIA (CBS) -- The City of Philadelphia has reached a $2 million settlement with the woman beaten by police during the unrest after the killing of Walter Wallace Jr. The incident with police left Rickia Young bloodied, her car bashed in and landed her in jail, separated from her child.

"I hope the officers responsible will never have the chance to do something like this to another person," Young said.

Young's lawyers, Mincey Fitzpatrick Ross, LLC, says this is the first time the city has paid a settlement this large for a non-fatal incident.

At the time, Young was driving with her 2-year-old son and 16-year-old nephew. Her lawyers say she had just picked up her nephew in West Philly, who was fearful of the growing tension between police and those protesting the killing.

Her SUV got caught in the middle of the ruckus and that's when her lawyers say responding police bashed her windows in, got her on the ground, and beat her with their batons -- and then arrested her.

A now-viral photo of a police officer holding her child was posted by the National Fraternal Order of Police with a caption saying, "officers saved a child that Young and her attorney's said was political propaganda."

"For them to portray me as this type of mom who didn't care where her children was while chaos was happening all around was very hurtful," Young said. 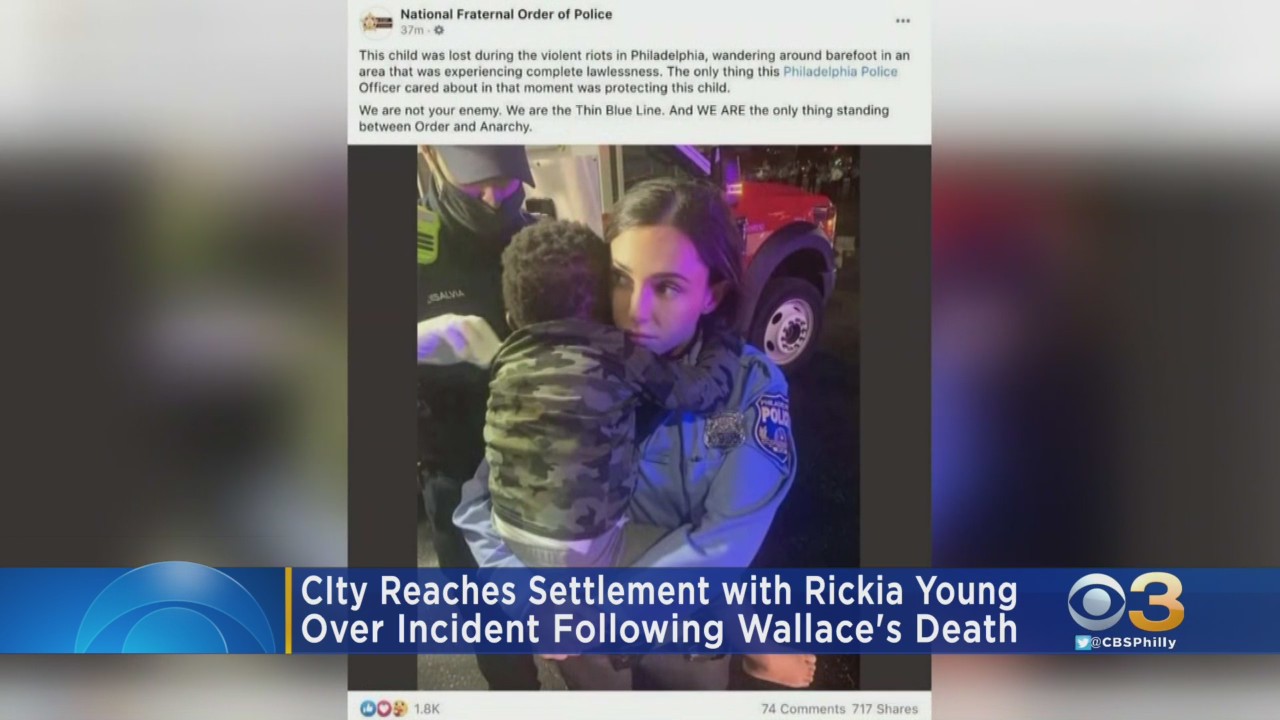 Young and her lawyers say this is more than about money.

They are now asking the district attorney to file charges against every officer that was involved.

"Our physical injuries may heal but the pain of seeing those images of my son in the arms of an officer and the horrible caption written to describe that picture may never heal," Young said. "They need to be held responsible."

They're also suing the National Fraternal Order of Police.

"Aggravated assault, recklessly endangering another person, simple assault," Thomas Fitzpatrick said. "This was nothing more than an attack that would be perpetrated by any random street thug and they should be treated just the same."

As for Young's son, he remains traumatized.

"He's already showing a fear of police, he's afraid of the dark, loud noises from the banging on the windows, smashing in the glass, he's easily startled now," Kevin M said.

CBS3 has received a statement from Philadelphia Mayor Jim Kenney:

"The experience that Rickia Young and others with her went through while driving on October 27, 2020 following the police shooting of Walter Wallace, Jr. and unrest was absolutely appalling. This terrible incident, which should have never happened to anyone, only further strained the relationship between the Police Department and our communities. The officers' inexcusable actions that evening prompted an immediate and thorough investigation of the incident and for personnel to be disciplined and held accountable for their egregious conduct. I hope that the settlement and investigations into the officers' actions bring some measure of closure to Ms. Young and her family."

"While tensions were high during the unrest that followed the police-involved shooting of Walter Wallace, Jr., myself, along with the law enforcement community demand that officers exhibit the utmost professionalism, decorum, and poise while interacting with members of the public," said Police Commissioner Danielle Outlaw. "The behavior that occurred during the interaction between Rickia Young, her nephew, her son, and some of the officers on the scene violated the mission of the Philadelphia Police Department. As a matter of fact, the ability for officers and supervisors on the scene to diffuse the situation was abandoned, and instead of fighting crime and the fear of crime, some of the officers on the scene created an environment that terrorized Rickia Young, her family, and other members of the public"

Meanwhile, Philadelphia police say two officers were fired as a result of this incident. In addition, 14 other officers are awaiting disciplinary hearings.

At this time the Philadelphia District Attorney's Office says they cannot confirm or comment on any potential criminal investigation surrounding this incident.

CBS3's Alecia Reid will have more on this story on Eyewitness News beginning at 4 p.m.