NEW YORK (CBS PHILLY) - The stage at Hofstra University in New York is all ready for tonight's first presidential debate of the general election. The Commission on Presidential Debates (CPD) announced the format for tonight's showdown between Donald Trump and Hillary Clinton. The formats for each of the 90-minute debates is meant to engage an in-depth discussion about current issues the nation is facing.

Tonight's presidential debate will be held from 9:00pm to 10:30pm Eastern time without commercial interruption, moderated by NBC News' Lester Holt. According to the Commission, the debate will be divided into six timed segments (approximately 15 minutes each) on major topics that were selected by the moderator.

Mr. Holt will open each segment with a question and each candidate will have two minutes to respond. Trump and Clinton will then have the opportunity to respond to each other, and it will be the job of the moderator to use to rest of the segment for a deeper discussion on the topic. 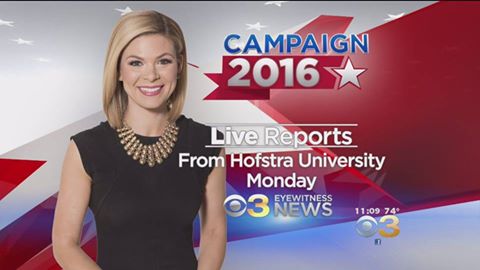 While some of these rules were made by the CPD – some of the rules for tonight's debate were made through agreements between the Trump and Clinton campaigns.

It's expected that there will be an audience of 1,000 people viewing the debate at Hofstra University.