PHILADELPHIA (CBS) -- This idea comes from a lifelong Philadelphian who decided that people in the area might need a new look.

"One day last summer, I was at the Jersey shore, on the beach, and paying close attention to the Boomers.  I saw nothing but t-shirts of, like, 'Over the Hill at 50,' 'Greatest Grandma,' 'Somebody Loves Grandpa.' "

avner, CEO of B4 Apparel, started RetroPhilly.com, a web site dedicated to all things Philly, from the '40s on.

"People absolutely love the neighborhood shirts," he says.  "One of our most popular shirts we call 'Bye Bye, Shoppers.'  It's tags from all of the different stores that are no longer here."

And others of your favorite restaurants that have gone away.   One lists several on one shirt; it's called "Nosh-stalgia."

Hear the entire interview in this CBS Philly podcast...

And people are into this from all over the country.

"A doctor in San Francisco ordered three dozens t-shirts from Pagano's Pizzeria," says Lavner.   "He and his Penn fraternity brothers were having a reunion in California and they all used to hang at Pagano's. 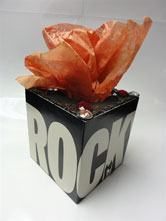 "We have a very unusual collection of tissue boxes.  Our most popular seller is the Rocky tissue box.  Sylvester Stallone actually has one."

If you have a memory of Philadelphia, they probably have an item for you.  Check it out at RetroPhilly.com.