PHILADELPHIA (CBS) -- This isn't exactly "Love Train," but it's sort of like "Spread the Love Bus."

"It's just about going back to my community and doing some random acts of kindness," says KeVen Parker, president and CEO of Ms. Tootsie's Bar and Lounge on South Street in Philadelphia.  "Whether we know those people or didn't know them, I just wanted to give back."

Ms. Tootsie's is a Southern comfort-food restaurant which recently won the Food Network's award for best fried chicken in the country.

And what's their secret?

Parker has begun a year-long campaign to do random acts of kindness throughout the area.  First up was paying the grocery store bill for a woman named Shirley.

"She was very, very excited.  She didn't expect it at all," says Parker.

Every month, he will pick different people to help. 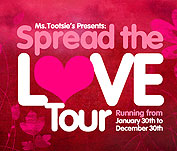 "It's just really about spreading the love.  A lot of times, people look at when you're doing something from a perspective of generosity, that it only goes to underprivileged or poor people.  But everyone needs a little love."

And he welcomes your suggestions.

"If you come to the restaurant to dine, we have nomination cards, where you can nominated someone.  You can go on our web site and nominate someone, or you can just call us.   It's just paying forward, just helping someone else.  It's not even about the amount of money.  It's not about how large or small the gift.  It's about the generosity.  It's about the act."