PHILADELPHIA (CBS) -- Summer weather is not ready to move out of the Philadelphia region just yet. Elevated humidity levels and high temperatures are expected to be near or at 90 degrees through midweek.

The region's next chance for showers and thunderstorms will develop late Monday night and into early Tuesday morning.

A complex of rain and storms looks to pull out of the Midwest and utilize a stalled frontal boundary to maintain its lifetime and move east into our neck of the woods.

Models are diverging on how well this complex will hold together as it moves into the region, but CBS3 Meteorologist Lauren Casey says traditionally, in her experience, these mesoscale convective systems tend to survive a bit longer than models will indicate.

If the complex maintains some strength, the area could see a few stronger embedded storms, mainly to the north. This would be late Monday night into early Tuesday morning. There is a slight risk for severe weather for the Poconos and Northampton County and a marginal risk for Philadelphia County and the city's northern suburbs. New Jersey's Burlington County is also at a marginal risk for severe weather on Monday night. 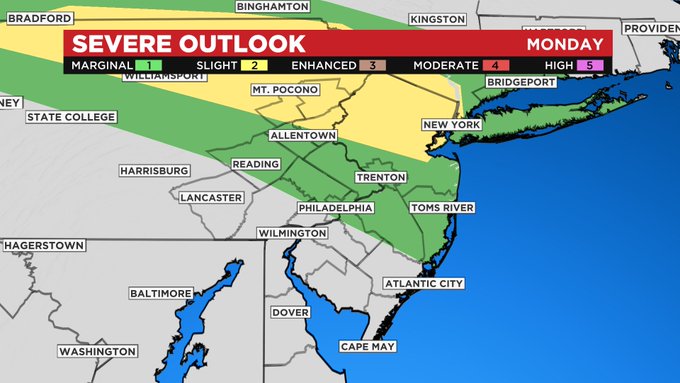 The front is expected to hang to the north into Wednesday and looks to provide a chance for scattered afternoon thunderstorms far north and west.

The thunderstorm chance looks to become more widespread on Thursday and the area could potentially contend with a heavy rain threat, but one of two things would have to come to fruition. Moisture from Nicholas pulled into the region's atmosphere on the upper-level wind flow and/or tropical moisture in association with a weak tropical feature off the Southeast/Mid Atlantic is drawn in.

TROPICS: Tropical Storm Nicholas has formed in the western Gulf of Mexico. Nicholas is forecast to make landfall as a fairly strong tropical storm on the TX coastline Monday night to bring heavy rain to parts of TX and LA and up to 5 ft. of storm surge to the central TX coastline. A tropical wave still over western Africa will emerge over the far eastern Atlantic and has a 60% chance of development in the next five days.

Stay with CBSPhilly.com for the most up-to-date weather forecast.