PHILADELPHIA (CBS) -- After an early winter snow deficit, part of the Philadelphia area will see their first accumulation of snow on Monday. Snow has been falling across South Jersey and parts of Delaware since 5 a.m.

A Winter Storm Warning is in effect for the Jersey Shore and central and southern Delaware from 4 a.m. until 4 p.m. Monday.

A Winter Weather Advisory is in effect for Philadelphia and Delaware counties and for our nearby New Jersey suburbs and northern Delaware from 4 a.m. until 4 p.m. Monday.

Flurries or a passing snow shower for areas far north and west will be left out during this event. 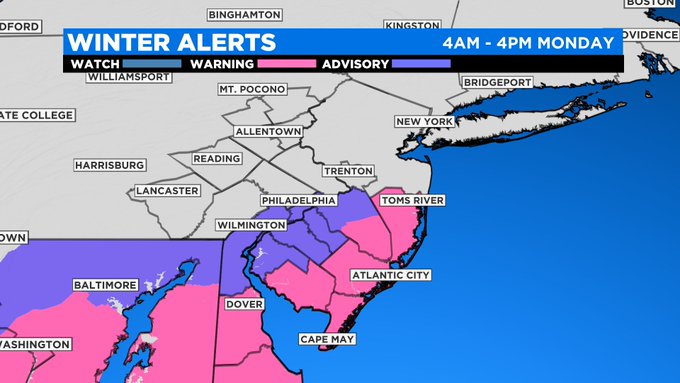 A wintry mix will overspread the I-95 corridor and areas south and east overnight and quickly turn to snow as very cold air blasts in on the backside of a strong cold front. Snow will be falling during the morning commute in the warning and advisory areas, including Philadelphia.

Falling snow will likely stop in Philly around 2 p.m. as very light accumulations are expected in the city. The highest threat of snowfall will be around 1 p.m.

Snow will stop falling at the Shore after 4 p.m., as parts of South Jersey and Delaware could see more than six inches. 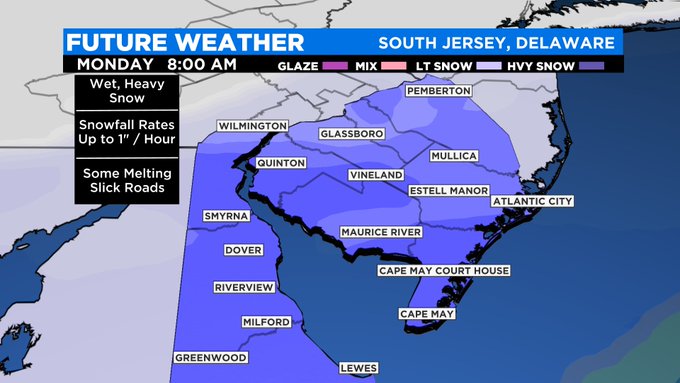 The ground is extremely warm due to temperatures in the 60s this past weekend which may inhibit accumulation for the first few hours of the event, but the snow will turn measurable. Additionally, the heavy rate at which the snow will fall at times, up to 1" per hour may work to overcome some melting. 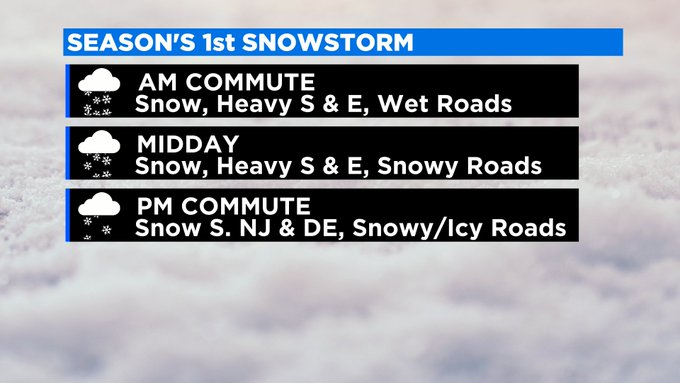 Afternoon temperatures will be sub-freezing - in the mid & upper 20s - regionwide and thus promote the "sticking" of snow as well as snow-covered/icy road conditions. If you can work remotely on Monday, please do so, and avoid travel.

Once the storm is over, the threat then shifts to ice on Monday night.

Untreated road and surfaces will experience rapid freeze over, which will make it dangerous driving Tuesday morning.

For the latest developments with the storm follow us here online, streaming on CBSN Philly and on social media.

You can also download the CBS Philly App for all the latest in Philadelphia news, sports, weather, and more!