PHILADELPHIA (CBS) -- Later this evening and tonight, if you think you hear thunder or see lightning as the snow and sleet work through the region, don't be confused, you most likely did! For the first time since 2018, we could experience a weather phenomenon called thundersnow across portions of the region.

Thundersnow is an unusual type of thunderstorm, with snow falling as the primary form of precipitation, rather than rain. 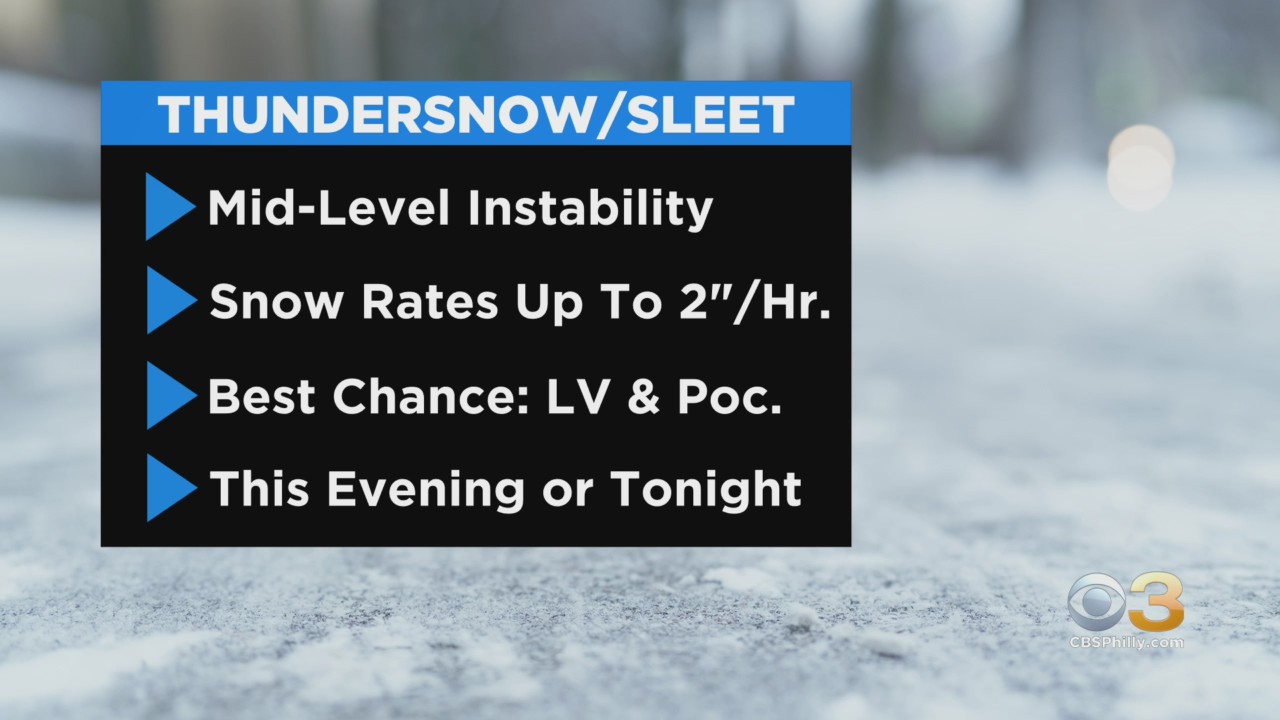 As our current nor'easter pushes through the region this evening, it will intensify.

As this happens, the storm will draw warmer air into the mid and low levels of the atmosphere. That warm air will create a lot of instability, by winter standards, across most of the region. This allows for heavy bands of snow or a wintry mix to develop in the evening and overnight tonight.

Within those bands, we could see precipitation come down as much as 2 inches of snow or sleet per hour.

These strong bands are then the places most likely to hear thunder or see some lightning. Right now, while there's a threat for thunder across most of the region, the best chance to see thundersnow or sleet will be across the Lehigh Valley and Poconos.

Interestingly enough, communities along and north of I-78, where some of the strongest bands could set up and where thundersnow is most likely, is also where the highest snow totals are likely to occur.

Curious about the last time we had thundersnow in the area? It was March of 2018! Thundersnow was officially reported on March 7, 2018. There were multiple reports of lighting in areas across South Jersey, in places like Mount Holly.

If you remember correctly, that was the March of four nor'easters in the Delaware Valley and there are some pretty interesting similarities between our current system and the system from that March.

In 2018, the nor'easter snow rates came in between 1-3 inches per hour. Tonight, 2 inches per hour is possible. That system dumped 6.1 inches of snow in Philly, and this system is forecast to dump a very similar snow amount in Philly.

If you happen to be up later this evening and tonight, make sure to keep the phone or camera handy and maybe you can snap a picture or video of this rare winter weather phenomena!