PHILADELPHIA (CBS) - Some are calling it a migration. New research shows thousands of people are moving to Philadelphia from New York City.

New apartments going up in Philadelphia's Spring Garden section are just some of hundreds of new homes being built across the city right now. If you're wondering who's renting or buying them, consider this: since 2015, the City of Brotherly Love has been gaining more people moving in from the Big Apple than those moving in the opposite direction, according to the Center City District.

"If you've chosen to get out of NYC, Philadelphia is a phenomenal replacement," Christopher Plant of MoveToPhilly.com said.

Plant says many more people are now migrating because of the pandemic.

"You do have the fallbacks of incredible architecture, more space, affordable living and the proximity to NYC," he said.

Roughly 7,500 people moved from New York's five boroughs to Philadelphia from February to September, according to Unacast, a location services company. That's about twice as many of Philadelphians who went to NYC. 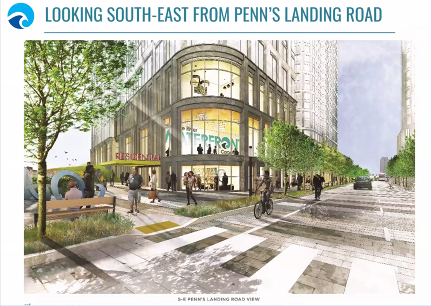 This rendering shows what Penn's Landing is expected to look like after a New York-based company called the Durst Organization won a $2.2 billion bid this month to build new parks, restaurants and homes there.

"A very nice city, a lot of elbow room, and the people there are very nice. And we thought there would be a lot of potential for development," Alexander Durst with the Durst Organization said.

Still, what Philadelphia and New York both have in common is both are losing renters to the suburbs.