PHILADELPHIA (CBS) -- After a violent weekend and another shooting on Monday, the homicide rate in Philadelphia soars to 15, making the number of killings more than the number of days into the new year. There were eight homicides in less than 48 hours as a violent weekend was met with yet another homicide when a 19-year-old was killed in West Oak Lane before noon Monday.

"What we are doing now is investigating shootings and homicides. We have our community crisis people in the neighborhoods, trying to get an idea of what is going on and to stop retaliation," Philadelphia Mayor Jim Kenney said.

"At the end of the day it comes down to folks feel, like I do, who have had enough," Acting Philadelphia Police Commissioner Christine Coulter said.

Coulter spoke out about the city's recent wave of violence.

There have been eight homicides, at least seven shootings and a stabbing outside of Luke's Lobster near Rittenhouse Square in just the last three days in Philadelphia. 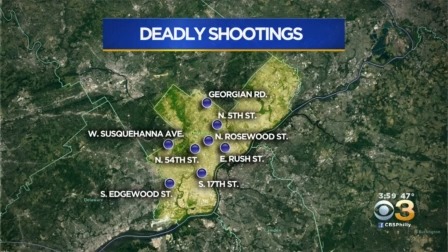 There have been at least 15 homicides in 13 days.

The violence is widespread, from Center City to Kensington to West Philadelphia.

On the 3100 block of Rosewood Street in North Philadelphia, a 15-year-old boy was shot in his chest and killed.

But the youngest shooting victim was on the 100 block of East Pastorius Street in East Germantown. An 18-month old boy was grazed by a bullet in his head while playing outside of his home on Sunday.

"He's 18 months. He can't even come out here and play in the daytime? That's bad," the child's great grandfather, Sidney Clark, said.

The city's most recent homicide happened around 11 a.m. Monday on Georgian Road in West Oak Lane

That is where 19-year-old Robert Marlon Vann was shot in his head and killed.

Neighbors say he grew up on the block and was in college studying architecture.

"I'm getting ready to pull my team together and we're going to come out and start hitting these streets. We're going to try and pull some of this young generation in," Bishop Steven Johnson said. "It's out of hand. It's out of control and we have to help them."