PHILADELPHIA (CBS) -- Thousands of protesters packed the streets around City Hall on Saturday demanding an end to police brutality, racism and injustice following the death of George Floyd. The peaceful protests began at the steps of the Art Museum and Eakins Oval before moving down the Benjamin Franklin Parkway and to other parts of the city.

It was just a week ago that protests erupted in the area over Floyd's murder. On Saturday, demonstrations were peaceful while a citywide curfew went into effect at 8 p.m. until 6 a.m. on Sunday. 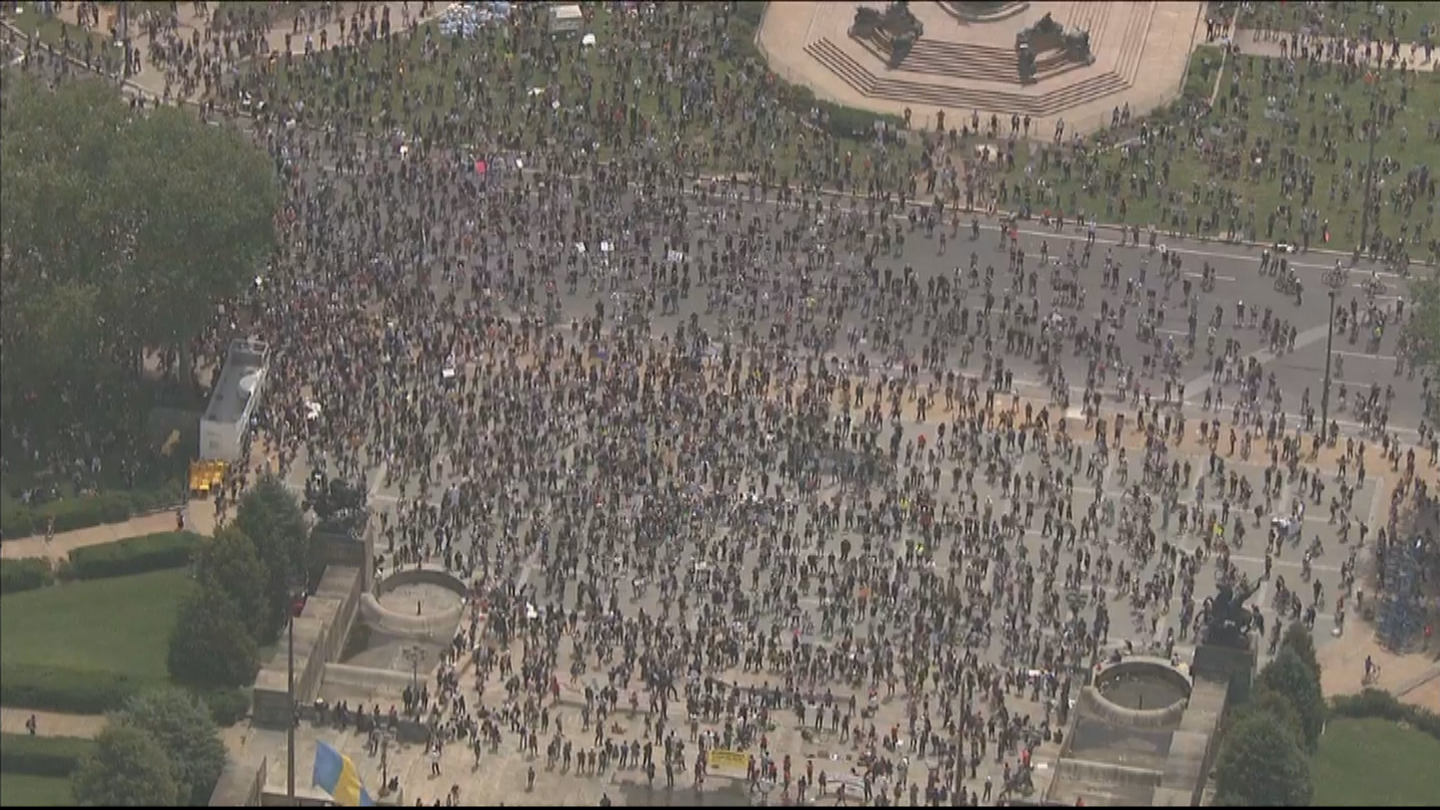 Saturday was the eighth straight day a curfew was issued in the city. During the curfew, people may leave their homes only to go to work at essential businesses or to seek medical attention or police assistance.

Compared to last weekend's rioting and looting, Saturday night was extremely peaceful, but the protesters are still demanding racial justice.

"I'm proud to be here and we're here to make a change," protester Chris Andino said.

Protesters demanded changed Saturday afternoon. It was organized by the Party for Socialism and Liberation. The demonstration began around noon at the Art Museum and quickly drew a large crowd.

An estimated 6,000 people marched through Center City to applause.

A group of kids marched arm-in-arm chanting, "I can't breathe." Many other people held signs, while others held their fist in the air. One man held the American flag.

There remained a large gathering at City Hall on Saturday evening, which, at times, had a party atmosphere with groups of protesters dancing in the streets.

Demonstrators say it's now time to educate people in their own homes.

"It's just crazy that this many people have been coming out," protester Maudi Harley said. "But at the same time, it's saddening that this many people have seen the problem and we have to come to this point to get something to happen. I think that now people need to take it to their homes and from then, their children will learn. They need to educate their family members.

"All of these people are employees of government agencies and the change will come within the household and education. I don't think we can change the whole system in one day, but if we continue to educate ourselves and hold everyone accountable, all of those things will come into place."

It appears as though those in charge are listening.

The mayor also established a special reconciliation committee that will work to get to the root of the anger in the city, including addressing poverty, police reforms and race relations.

"I don't think we can change the whole system in one day, but if we continue to educate ourselves and hold everyone accountable, then all these things will come into place," Harley said.

"Philly is all about love so we're going to spread the love and fight for all of our brothers and sister," Douglas Hardman, a protester, said. "All of them."

Police kept their distance and are providing a perimeter for protesters to march peacefully.

There were no reports of any vandalism or looting like there were last week.

While recent demonstrations have been peaceful, Outlaw is concerned about the recent theft of canisters containing dangerous materials.

"We are concerned. This isn't a typical type of theft that you would see. We know, just from Saturday and Sunday, that there's explosives being used to access either ATMs or fires being set off around the city of various buildings and vehicles, is most certainly of concern," Outlaw said.

Outlaw says they will continue to ramp up the number of officers on the streets.

The National Guard and other law enforcement agencies are also continuing to assist Philadelphia police.